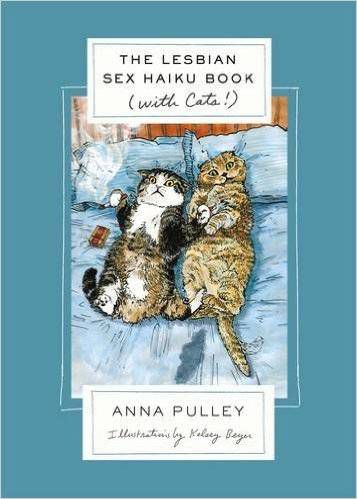 I recently went to a birthday celebration, a good old-fashioned house party with whiskey-themed beverages, dancers dancing, friends catching up, and everyone gathering in corners to talk about a book. But not just any book! It had me at the title, and soon everyone (and I mean everyone—men, women, black, white, gay, straight) was talking, laughing and sharing their own epic fail dating stories, all due to The Lesbian Sex Haiku Book (With Cats!) You couldn’t dream of a better title, or perfect party conversation piece.

See it goes like this: two women, one a writer and one an artist, both who’ve experienced their fair share of the lesbian dating scene, are sitting around talking about lesbian sex stuff, as you do, when suddenly the lightbulb goes off and they think: we should write a book about this!

But that’s been done, and done again, and done some more.

So they mull it over a little longer and realize what the world really needs is a lesbian sex book, tackling the big issues like dating, cargo pants, makeups, breakups and booty calls, The L Word…all written in lovely haiku form, and illustrating the finer points with beautifully hand-drawn scenes acted out by cats. OMFG. How have I lived my entire life without this book?

Seriously though, the book is a humorous take on lesbian dating life, including the good, the sexy, and the seriously fucked up. As author Anna Pulley explains in the forward, after a particularly dark downtime, living in an expensive new city after having been dumped by her fiancee, she couldn’t just journal her feelings, but she had to keep Tweeting, for work’s sake. And from those 140-characters, an unlikely source of inspiration was formed. “Writing haiku was how I slowly re-raveled myself,” Pulley writes. “I put my life together three lines at a time.”

Through getting back out into the scary, messy, crazy lesbian dating scene, and haiku-ing about it, Pulley not only found inspiration for a book, but an artist girlfriend who collaborated to illustrate Pulley’s feelings through tabby-cat renderings of things like working pick-up lines over a large cup of coffee, cozy knit hat firmly in place; or two kitties passed out while watching Roseanne; or a particularly disgusted feline reading the two-week anniversary note her paramour left on the table. Stereotypical lesbian stuff.
But don’t worry! No kitties were harmed in the making of this book. The illustrations are perfectly PG friendly, with the most graphic being a cat tied up in bed and ready for some playtime, which accompanies the series “If the Fifty Shades Series Had Been Written by a Queer Lady”; or the one with the cat holding the magic wand, in the “How Lesbian Sex Works” chapter.

Read The Lesbian Sex Haiku Book (with Cats!), just a few days late for National Poetry Month, to school yourself on what a haiku really is.

Read it to learn about lesbians of all stripes, from the baby dyke to the bookish lesbian (hello!) to the cat-or-dog-obsessed lesbian (um…), and how to break up with your girlfriend but totally stay best friends for the rest of your lives, because—lesbians.

Read it because it’s big-hearted, sometimes cringe-worthy, but always fun, funny and sweet.

Read it to inspire your own lesbian sex themed haiku, as in: