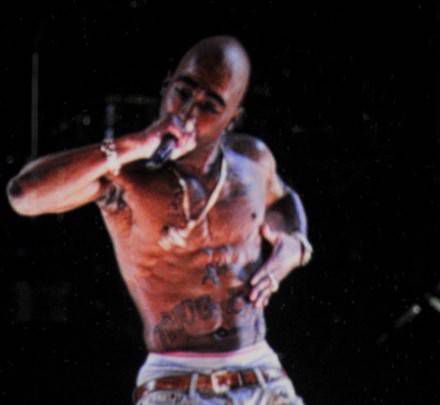 I don’t know if you caught the rather disturbing Tupac hologram at this years Coachella music festival in California, but even more than being kind of morbid, it stretched the already bloated “posthumous Tupac industry” to its most shameful limit. Even before he appeared live after-death at Coachella, he had released six posthumous albums. You can make the case that The Don Killuminati: The 7 Day Theory doesn’t count since the album was recorded and mixed in August of 1996, Tupac was killed in September, and the album was released in November. But that still leaves five other albums. And their content amounts to rarities, lost b-sides, demos, and songs that were cut altogether. It’s a sort of licking the cultural plate clean, as morbid as that metaphor is. And it’s a divisive issue among fans. Or at least the fans that would consider themselves hard-core.

On the one hand, it’s completely and transparently cynical. In an act of grave robbing, everyone from record to t-shirt companies are exploiting the deceased. Everyone’s making tons of cash off of material that the artist never agreed to release. On the other hand, once the artist is gone, doesn’t all of the work belong to everyone? Aren’t fans entitled to have what they want?

Music isn’t the only industry that operates like this. Publishing has produced some of it’s own Tupac’s. David Foster Wallace, for instance, has had a spate of post-death releases. The Pale King, his posthumous novel, got mixed reviews that ran from molten hot appreciation to hardened disapproval. His newest to be released is Both Flesh and Not, essays that hadn’t ever seen book form. Included in the collection will be his famous pieces on the tennis player Federer and the movie Terminator 2. This release should pass the moral muster of detractors of posthumous publication, since all the essays have appeared elsewhere. But this book may be an outlier. It seems like The Great Bandana is trending Tupac.

If David Foster Wallace is the American Champion of posthumous publishing, then Roberto Bolaño holds the world title. At least as far as being translated into English is concerned. So far he’s had two novels and a collection of short stories released after his death. And due out in November is his rediscovered novel Woes of the True Police Man. If you’re already a fan of Bolaño, you’ll probably read this novel no matter what it’s about. But if you’re not familiar and need a plot to entice you, it’s a gritty tale about the unsolved murder of a number of women in northern Mexico. It’s a theme Bolaño fans should already be familiar with.

And I have to tip my hand and show my cards here. I’m all for publishing as much material by an artist as possible after their death. Maybe I’m just a person of a certain place and time, but I feel our right to have as much art (because that’s what this is really all about) in our lives as possible trumps any claims of privacy that the deceased are entitled to.