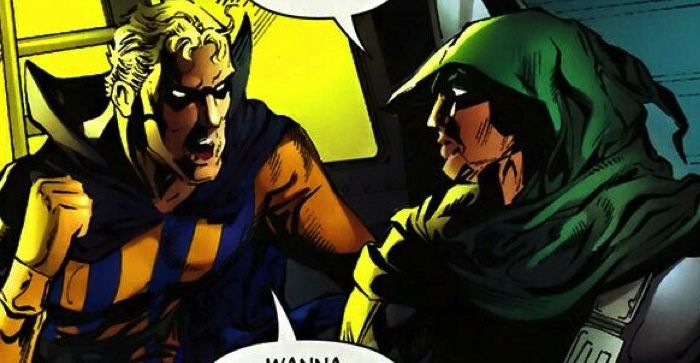 For those who don’t spend their every free moment reading fan fiction, a “ship” is short for “relationship.” It generally refers to a relationship that does not exist in the actual text of a book, TV show, etc., but that the fans would like to see happen anyway. The most famous ships tend to be between two male characters, but that’s not a requirement. Also, the term “ship” can be both noun and verb. For instance, a shipper can ship two characters exclusively with each other, or they can have multiple ships. Makes perfect sense.

Now that everyone knows what a ship is, allow me to introduce you to an obscure one that holds a special place in my nerdy little heart.

As members of the Flash’s rogues gallery, the Trickster and the Pied Piper have always had a lot in common. They both have delightfully tacky costumes, they both rely on distinctive gadgets to commit crimes (Trickster has a whole bag of toy-based gimmicks, and Piper has his flute), and they both switched allegiances (Trickster joined the FBI while Piper became close friends with the new Flash, Wally West).

Despite these similarities, it took a while for them to become more than professional colleagues. They did eventually become close friends and went on some ridiculous adventures together. Remind me to tell you about the time with the giant, sentient musical note.

Was their friendship enough to set the ship sailing? Maybe. However, this pairing — which has the appropriately goofy portmanteau name of “Pipster” — seems to have been popularized (if not originated entirely) by Countdown to Final Crisis. This may be how I first learned about it, but I don’t remember at this point. What I do remember is that Countdown was a big deal back in 2007–2008. Featuring multiple interlinking plot threads, it was supposed to set up events and attract attention for Final Crisis, which promised to rewrite the DC universe as we know it (gee whiz, I’ve never heard that before). It…kind of did that?

I cannot impress upon you strongly enough how worthless Countdown is. I wouldn’t even recommend it as an example of how not to make a comic; there are plenty of shorter examples out there that won’t waste so much of your life. It is confusing, inconsistent, ugly, nonsensical, and insulting to both the characters and the reader’s intelligence. With scant few exceptions, the only parts of this dumpster fire that even remotely resemble entertainment involve Piper and Trickster. Handcuffed together a la The Defiant Ones, they spend most of the series trying to escape the superheroes who wrongly believe they murdered the Flash (Bart Allen, that is, not Wally West…there are a lot of Flashes and they’ve all died at some point).

Please note I described their parts as entertaining, not good. A third of Trickster’s dialogue is yelling about how screwed they are, a third is gay jokes, and the last third is some variation of “no homo” — all of which serve to irritate the openly gay Piper. This is either very bad writing (it’s certainly out of character; Trickster never objected to Piper’s sexuality before) and/or a sign that the Trickster is having some kind of identity crisis. Seriously, the man is perpetually ten seconds away from breaking into “My Girlfriend Who Lives in Canada.”

But where there is an obvious closet case, there is hope for a romantic happy-ever-after, at least in fiction. Surely this was leading up to a big revelation where the Trickster finally got his head out of his striped butt and admitted all his cringeworthy jokes were his juvenile way of covering his feelings for Piper? Surely this is where DC was going with this?

Trickster’s last act — hurling himself in front of a hail of bullets to protect Piper while screaming “Not him! Not now!” — only added fuel to the shippers’ fire. For context, just before the shooting started, Piper and Trickster had their first genuine bonding moment. Trickster even called him by his real name. For one panel, it seemed like the status quo of their relationship was about to change.

Unfortunately, with Trickster’s demise, we would never find out if that change would include a romance or just a newfound respect between the two ex-Rogues. Even when he came back years later, he and Piper never interacted the way they did before or during Countdown. The moment — and the momentum — was deader than the New Gods movie. (The New Gods also played a role in Countdown. It wasn’t great.) These days, Piper is dating someone else. He is also now a blond instead of a redhead, which somehow upsets me more than the way DC shanked the Pipster relationship.

While writing this article, I went to Hugo Award–winning fan fiction repository Archive of Our Own and checked out the stories listed under their official Pipster tag, “James Jesse/Hartley Rathaway.” (Yes, those are their real names. No wonder they turned to crime.) I got 106 results, which isn’t much. Most of them are several years old, too. Just goes to show how much of an (ahem) flash in the pan this ship is.

But I don’t care. The Pipster ship may be little more than a leaky life raft these days, but I will work the paddles alone, still dreaming of the day when DC fulfills a promise they never made. Such is the life of a shipper.