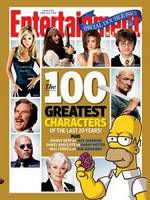 To commemorate its 20th anniversary last summer, Entertainment Weekly published a list of the 100 greatest characters of the last two decades. And while the list is full of characters who first appeared in prose, almost all of these are now known for their film and television iterations (though there are a precious few strictly literary selections).

So I would like to offer a supplemental list for your consideration. These selections are drawn from my reading–so  many famous characters I haven’t read don’t appear, no matter how fantastic they are.

We’re sure we missed a few, but the fun part of these things is arguing about them anyway. So after browsing our choices, let us know your favorite characters from the last score years.

So here are, in alphabetical order, my Top Twenty Literary Characters from the Last Twenty Years:

Alexander Perchov | Everything is Illuminated  by Jonathan Safran Foer (2002)

Perhaps the best comic character from the last couple of decades, Perchov begins as an amiable clown, uproariously mangling the English language as he tries to demonstrate his worldliness. As Everything is Illuminated proceeds, however, Perchov moves to the center of the story, and his burgeoning self-awareness transforms pity into pathos.

Anton Chigurh | No Country for Old Men by Cormac McCarthy (2005)

Part Grim Reaper, part Rick from Casablanca, Chigurh is as suave as he is satanic. Nihilism never sounded so good.

The Namesake isn’t about Ashoke Ganguli; it’s about his son, whom Ashoke named after Nikolai Gogol. But Lahiri gives Ashoke the Jules Winnfield moment in the novel (you know, that speech in Pulp Fiction in the diner when he’s sitting across from Tim Roth with a gun in his face and he is as cool and philosophical as Socrates on an iceberg) as he explains to his son why he named him after a 19th century writer with a silly name. It’s a tender, but forceful moment that kinda makes you wish your dad had a near death experience and named you “Balzac.”

A quasi-Bigger Thomas for the nascent capitalism of India, Halwai is so compelling that his rage is almost, well, charming. Almost. Is he a revolutionary or an opportunist? It’s up to the reader to decide, but he is a raconteur for the ages.

Probably the most idiosyncratic choice here, but Celia del Pino is one of those characters that just sticks. The matriarch of Cuban family who immigrates to America, Celia is a one-woman parade of weirdness: she has semi-magical powers; she goes nuts for several years; she has some sort of erotic entanglement with Fidel Castro; and she eventually pulls an Edna Pontellier. (By the way, that’s not technically a spoiler because you have to know what happens in The Awakening. See what I did there?). It’s like if you crossed Mary Poppins with Sylvia Plath and made her a Communist revolutionary. Awesome stuff.

I’m fudging here because honestly I have a hard time separating them from each other. Still, these cast-off women who find shelter together in an abandoned Convent on the outskirts of an all-black town in Oklahoma undergo a stunning transformation. Too different to be ignored, they come under attack by the town’s intolerance–and eventually morph into avenging angels of horrible beauty. Paradise is perhaps Morrison’s most ambitious work, anchored by these indomitable few.

I honestly don’t know if I’ve ever read a more fully-realized character. Shields doesn’t portray Daisy so much as summon her. And even though pretty much nothing happens (this is a story about being ordinary), it’s a riveting work. Case in point: I got damn near misty when Daisy, in her signal life-triumph, gets a gardening column in her local newspaper. A gardening column. And yet I hadn’t emoted this much since Vader killed Obi-wan. Simply a stunning display from Shields.

I’m not sure I like Elizabeth Costello. She’s jaded, narcissistic, and, for being such a renowned author, weirdly petty. But she is also wickedly smart and fantastically apathetic to the opinions of others–kinda like if Simon Cowell was a Nobel laureate in literature.

I’m crying just thinking about this. Gotta move along.

If you asked me to come up with a literary suicide mission, fictionalizing the life of perhaps the greatest psychological novelist of all time might well take the top spot. (That or telling Norman Mailer that Vietnam was just a police action to his face). But Toibin pulled it off. His James is brilliant, reflective, lonely, and charismatic–in other words, simply wonderful to read.

I’m cheating with this, since the title story for this collection appeared in Esquire in 1989. But this was probably the first short story that totally blew me away, and Lt. Cross’s epiphany has been rattling around my cerebellum for almost two decades: “They would get their shit together, and keep it together, and maintain it neatly and in good working order.”

Reverend Ames represents a strain of Midwestern Protestantism that I’ve always admired. He’s kind, tolerant, and righteous (in the non-freaky way). He doesn’t shy away from the difficult questions of human life, but he doesn’t try to explain them away either. If, as Rilke wrote, we should try to “live the questions rather than look for answers,” then Ames is our exemplar.

The Intuitionist is set in a slightly-futuristic, definitely-skewed projection of New York City. Pulled between warring schools of elevator repair philosophy (not a joke), Lila Mae Watson tries to figure out why she can “intuit” what’s wrong with an elevator and what in the freaking world that means. Allegorical without being heavy-handed, The Intuitionist, and its title character, is both provocative and enchanting.

I don’t understand why there’s not a film version of Motherless Brooklyn. Haven’t we seen enough pompous, inert crime dramas? Why not an absurdist noir romp featuring a detective with Tourette’s? How has Edward Norton not already been cast? I don’t understand this world.

Computer-hacker. Independently wealthy. Semi-pro level boxer. Photographic memory. Savant-like math skills. And one royally screwed up childhood. Salander is what would happen if the girl from The Lovely Bones survived and was heir to Wayne Enterprises.

So what if Benjamin Button (film-version) wasn’t a reverse-aging Forrest Gump, but instead a sardonic, perhaps even callow, man genuinely frustrated with his bizarre malady? Someone who takes his fate in his own hands before being reduced to a mewling brat? I’ll tell you what–a story that’s a little less Hollywood and a little more Brothers Grimm.

I’ve got a soft spot for stories about brothers. And one for stories about the plain states. And for laconic, emotionally stunted men who in the end overcome their inhibitions to care for wayward, impregnated teens. So, Haruf pretty much destroyed me here.

You can have Harry Potter. He’s a good enough kid, but how about some personality huh? And what’s so great about being born with mountain of innate magical ability? Mr. Norrell, a dusty and pernicious scholar, has earned his sorcerer bona fides the hard way–in the library. And when Jonathan Strange (imagine Harry at 25, but narcisstic and cocksure) blows in already knowing everything Mr. Norrell has laboriously learned, well you’ve got yourself a Professor CrankyPants with a spell-book. Good times.

We have here the apotheosis of the fanboy. Oscar is as much of a misfit as he is a dreamer–the essential ingredients for loving The Lord of the Rings, Star Wars, and comics beyond all reason. But when adventure and intrigue don’t come calling, he goes out and finds some, becoming a kind of contemporary Quixote.

You know that golden-boy athlete from high school who seemed to live on a plane just slightly above everyone else? That was Levov. American Pastoral is the story of what happened after graduation, and it aint pretty. What do you get when you mix schadenfreude with nostalgia? Something like the bittersweet elegy that is Roth’s portrayal of Swede the Great.

So, who would make your list? Rememeber, only the last 2o years count and they can’t be on Entertainment Weekly’s original list.