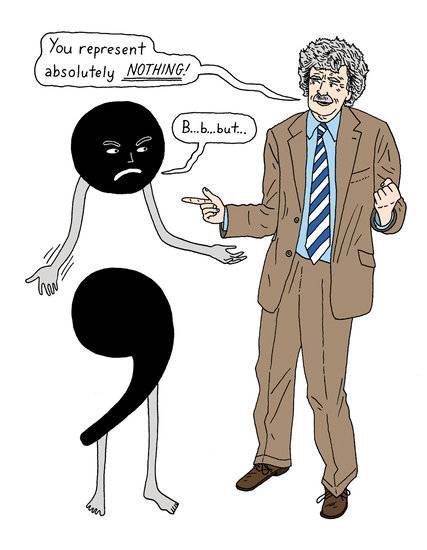 (Note: Nowhere in this compilation of “The Top Ten Weird Facts About Kurt Vonnegut” is “The Fact That He Wrote All His Weird Books” listed. That goes without saying, natch and natch.)

10.) He Waged War Against the Semicolon: Vonnegut’s vehement ruling on semicolons was “They are transvestite hermaphrodites representing absolutely nothing. All they do is show you’ve been to college.” This NY Times piece is a great riff on that.

9.) That time Vonnegut graded his own books. He gave himself an A+ for Slaughterhouse Five, a B- for Welcome to the Monkey House, a C for Breakfast of Champions, and a D for Happy Birthday, Wanda June. Here’s the list and below, what he has to say for himself:

8.) Speaking of grades, Vonnegut had to leave Butler University in Indiana after being unable to manage more than a C in his English courses. Winston Churchill, Thomas Edison, Albert Einstein, Kurt Vonnegut… was there a famous smart person who actually did WELL in school?

7.) Speaking of higher education, apparently, Vonnegut majored in biochemistry, mechanical engineering, and anthropology at a few different colleges but never completed any of his majors during his lifetime.

Wait, you spent eighty-four years on the planet Earth, and you never wanted to finish any of your majors?

Wait, you’re so smart/attention deficit you got bored with biochemistry, mechanical engineering AND anthropology before you could finish any of your majors?

Wait, you had three practical majors, and you still decided you wanted to be a science-fiction writer?

I have so many questions for Vonnegut’s ghost.

6.) There’s a really fun claim that Dr. Seuss and Kurt Vonnegut were college classmates and fraternity brothers that was disproved by Snopes. Boo, I hate when the lie out-awesomes the truth. Still, there is a fun fact in here–according to Vonnegut, in a piece from his autobiographical collage A Fate Worse Than Death, in the building used by Vonnegut’s fraternity there WERE a bunch of cartoons on the wall penciled by Theodore Geisel AKA Seuss. So the truth has a SCOCH of weird to it.

5.) Towards the middle of February 1976, Vonnegut’s mailbox filled up with sympathy cards from strangers but NO ONE HAD DIED. Finally, Vonnegut remembered that February 13, 1976 was the day Billy Pilgrim dies in Slaughterhouse-Five.

I would love to see devoted Vonnegut fans death-match with crazed Buffy the Vampire Slayer fans. Twi-moms, girls with Bieber fever, the match-up possibilities are endless.

4.) He survived the firebombing of Dresden in 1944 only to be sent home with frostbite in 1945. No wonder Vonnegut wrote the way he did. Vonnegut’s life was a Vonnegut story.

He also won a Purple Heart for having frostbite. That’s just weird squared.

2.) Vonnegut was a lifelong smoker, which in itself is not weird, but his reasoning, that it was “a classy way to commit suicide,” that’s NOT normal.

1.) According to the Saturday Evening Post, Vonnegut always wrote by the light of his red rooster lamp. Actually, I’m not sure if this is weird as much as it is just the sweetest thing there ever was. It’s weird and sweet. It’s both.