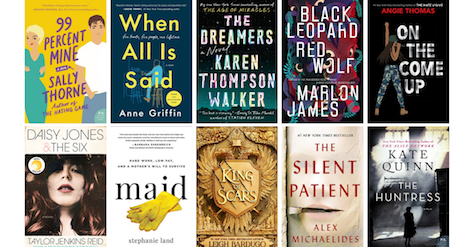 We’re already a fourth of the way through 2019, can you believe that? Time flies when you’re reading great books. Speaking of, we dug though Goodreads data to see what new releases are resonating with readers so far this year.

These 28 top books—all published this year in the U.S.—are ranked in order of anticipation and buzz. We measure that by taking a look at how many times a book has been added to Want to Read shelves. Then we factored in how many times these books have been read and the overall average reader ratings (nothing here has a rating below 3.5 stars).

The year isn’t actually a quarter over (being a bit over dramatic there!) but any surprises on this list?

We count a book as “about” if the main character/subject is a person of color or from a First/Native Nation, or if we are able to determine that a person of color/Indigenous character features significantly in the narrative. So a novel in which the main character is white will be included in these numbers if we are able to determine a secondary character of color is important in the story. We do not count a book if the principal character is white and there are a range of secondary characters, including characters of color, but none of the characters of color seem to play a significant role. This is, of course, somewhat subjective; we talk about the books that we can’t easily discern. We do not want to misrepresent a book as having multicultural content; likewise, we make every effort not to miss those that do.

Important CCBC work on diversity in children’s books. I’ve seen some great Twitter responses to this, too.

While the name of the new company is yet to be announced, Levine said the list will “center on diversity, ideally with a mix of 75% minority creators, including people of color, Indigenous people, and LGBTQ individuals. It will be focused on high-quality bookmaking and many of the things Arthur A. Levine Books has been known for.” Levine tentatively plans to launch in fall 2020, with a debut list of 20 U.S. titles and five of what he described as “the world’s best books in translation.”

Leaving a long-time, big name publisher to create his own press focused on inclusive lit? Bold and awesome.