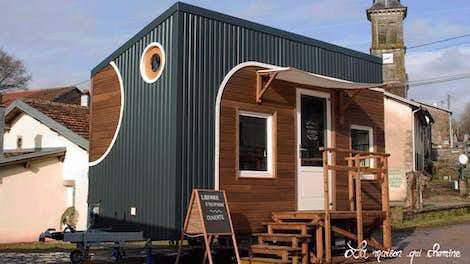 “Today, the space in which he works and lives has a bright interior with light-colored pine bookshelves and benches. A medal cladding painted a dark blue encircling the bookstore’s entrance adds a modern edge. “He left me carte blanche,” says Pauline Fagué, a recent graduate of interior design school who helped create La Maison Qui Chemine (or “The Wandering House”) with her partner, a carpenter. At the time, the couple’s firm was so new they did not have a finished prototype, but they took on the project eagerly…’I wanted a little feeling of a cabin and an aura of a small bookstore, which both evoke a lot of dreaming,” says Fagué of the overall design.'”

I suddenly feel compelled to wander the French countryside in search of this little gem.

“The first as-yet-untitled project will be a memoir set to be released in fall 2020 will include stories from her life, but will not be limited to sports. Penguin Press president and editor in chief Ann Godoff told The New York Times the book will also discuss social issues that are of importance to the soccer star, including equal pay for women and LGBTQ issues.”

“At press time, American Library Association representatives had yet to issue an official response, but Alan Inouye, ALA’s senior director, for Public Policy & Government Relations, offered a blunt first assessment of Macmillan’s plan: ‘Worse than expected,’ he told PW. ‘Embargoes violate the principle of equitable access to information that is at the core of libraries,’ he added, pointing out that Macmillan’s policy is curiously out of step with the rest of the industry. ‘Within the past year, three of the other Big Five publishers revised their library e-book business models, and none of them concluded that libraries were a threat to their profitability,’ Inouye observed. ‘Indeed, these other publishers believe that libraries benefit their businesses. Macmillan stands alone with its embargo.'”

Another publisher jumping in on the library e-book embargo; has anyone told them this doesn’t mean patrons will buy the books instead?