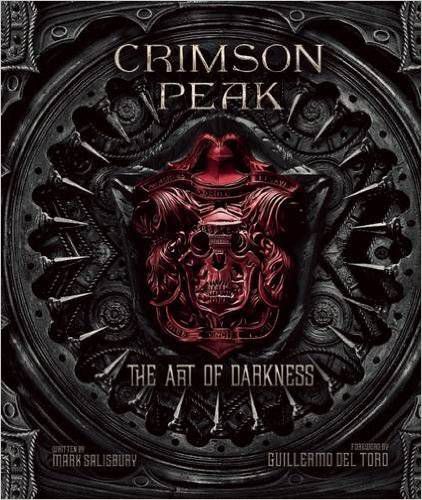 I am not typically someone who buys a ton of tie-in books, but when Crimson Peak: The Art of Darkness popped up on my “recommended for you” sidebar I made an exception (besides, it was the perfect thing to tide me over between the pre-order and the release of the #Hamiltome). Reading though it, one of the things that struck me was that, despite being about the art of a movie, Art of Darkness is a surprisingly bookish book.

For one thing, there’s the literary references. I love Crimson Peak the film in large part because it feels like a flawlessly-executed adaptation of the best Gothic romance I’ve never read. The Art of Darkness makes it plain that although Crimson Peak is an aesthetically sumptuous and visually dense film, del Toro’s references for it were literary rather than cinematic., In addition the obvious references to the holy trifecta of Jane Eyre, Wuthering Heights, and Rebecca, del Toro also cites Anne Radcliffe, Horace Walpole, Edgar Allen Poe, Matthew G, Lewis, M.R. James, Edith Wharton, Sheridan Le Fanu, and Oliver Onions as influences on this film. That’s one hell of a pedigree.

“We did a lot of research on …” is one of the most oft-repeated phrases in the interview portions of this book. Of course every movie requires research; one does not simply roll up to the set of a film with a camera and a gaggle of actors and hit record. But there is research and there is RESEARCH, and the Crimson Peak team clearly did the latter. In addition to all the reading on the Gothic romance and ghost story genres themselves, various members of the crew extensively researched19th century art, architecture, clothing, technology, and industry. Crimson Peak is not, obviously, strictly historically-accurate, but hey, you can’t break the rules unless you learn them first.

Then there’s what I called the “artifacts.” I am never going to argue with reading material that comes with extra reading material and that is what you get here. The Art of Darkness comes chock-full of visual and literary “artifacts,” as well as a handy envelope in which to keep them, itself covered in an image of creepily frolicking children, a giant moth, and trees with faces because of course. The reading materials are biographical pamphlets of the four major characters and Allerdale Hall itself. These bios are actually abbreviated versions of the detailed eight page biographies del Toro provided each of his actors, which include everything from the characters’ childhood pets to their Zodiac signs. I would be remiss if I did not also mention that the book also comes with a “handwritten” love letter from Tom Hiddleston’s character in case that interests some of you, ahem.

Finally, and most importantly, Art of Darkness features Guillermo Del Toro’s library confession. When describing the library of Allerdale Hall del Toro admits that he includes massive libraries in all of his films “mostly because I want to find the few books I don’t have and buy them from production.” Do not even pretend you would not do this. We would all do this.