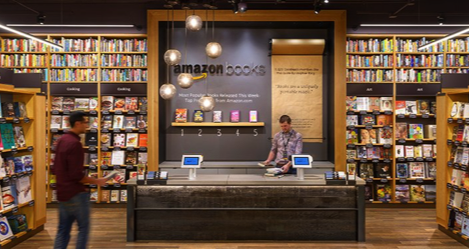 Amazon Books is about to become the fifth largest bookstore chain in the United States, and that should make you angry.

Amazon Books has now opened seven outlets with confirmed plans to open six more before the end of the year. I personally have actively avoided (and maybe once given the finger to) the Amazon Books in Chicago, but there are now stores in Seattle, San Diego, and New York City, as well as plans for Bellevue, Washington; Walnut Creek, California; San Jose, California; Los Angeles; Paramus, New Jersey; and another in New York City.

Why should you be angry? Independent bookstores have survived in spite of the risk of Amazon over the last few decades, squeezing through hard times thanks to their more personal, localized experience. I know that not everyone has an independent bookstore in their neighborhood, but frankly, book chains count too. My bookstore growing up was a gorgeous Barnes & Noble, and I was so involved and invested in that outlet that one of my best friends and penpals to this day is a former employee of the store who ran my Harry Potter book club. For those who live far from both chains and indie stores, a Rioter recently wrote a piece on how to shop indie when your nearest store is hours away.

This is about the physical bookstore movement. Even the book chains had to struggle against Amazon. My local bookstore has had rapid declines in employee hours over the years, and it has been in danger of closing more than once. In 1991, there were 11 chains with 13 or more outlets. In 2017, there are five, and they have a total of 1,076 outlets, down from 3,000 in 1991 (those statistics exclude indie bookstores with multiple locations and airport book chains). Since 2011, the number of chain outlets has declined by 32%. Borders was the most publicized failure, but there were plenty of others that closed in the face of the rising dominance of online sales.

Just like independent bookstores, some book chains have survived in spite of Amazon’s takeover of the book selling industry, and now they are cautiously growing again. Books-A-Million has added 30 stores, including a number of former, acquired Borders stores. Barnes & Noble closed 71 outlets between 2011 and 2017, but they have recently opened up a couple test stores and may be able to expand again. Half Price Books has had a net increase of eight stores since 2011, and Book World is also doing well.

But the truth remains that Amazon Books would not have a space to grow into without the vacancy left by the slow death of book chains and independent bookstores between 1991 and 2011. Bookstores and book chains have persisted despite what Amazon has done with the book industry in the last few decades, and now Amazon wants to capitalize on what booksellers and book-lovers have fought so fiercely for: the improbable survival of the in-person bookstore.

So no, you will never see me in an Amazon Books store. The rise of Amazon as a book chain is not good news for the book industry. It’s just one more example of Amazon trying to monopolize the way books are sold.