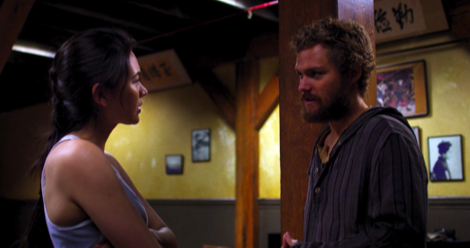 Back when I first watched Jessica Jones, I wrote an article about supporting character Officer Simpson, and how cleverly the writers had included a realistic, subtle portrayal of toxic masculinity to pair with the main villain’s larger than life misogynistic horror show.

Watching Iron Fist, I was struck by how these writers had done something similar. In a world of outsized villainy and horrific violence, they’d included a subtle, realistic sexist, the kind of guy every woman meets every day.

The only problem is, the writers of Iron Fist made him the hero.

Danny Rand is portrayed, especially at the start of the series, as a sweet lost lamb, wandering the mean streets of New York with an incongruous hip hop song on his lips and some glowing chi in his fist. He’s the youngest Defender by far, with an open, guileless face (despite his on-trend perma-stubble), a mop of tousled blond curls, and a boyishly exuberant outlook on life. He’s just so goshdarn nice.

And he is constitutionally incapable of hearing a woman’s “no.”

When he first tells his childhood bestie Joy Meachum that he’s her long lost friend, she naturally doesn’t believe him and kicks him out of her office – so he breaks into her home. Even though she reacts with anger and fear when she discovers this, he continues to repeatedly show up outside her home uninvited, because what are boundaries? Once he’s instated as majority shareholder of the company she has been running for years, he ignores all of her requests and advice and promptly gets both of them, plus her brother Ward, ousted from the company. Now, neither the board members nor Ward are particularly shining examples of humanity, but that doesn’t change the fact that not once on the show does Danny listen when Joy plainly and repeatedly states what she wants and doesn’t want. 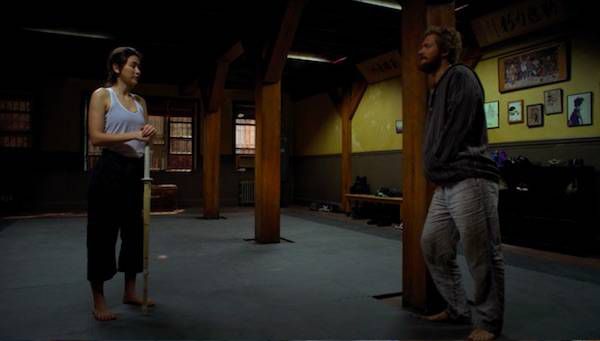 “How did you get in my house?”

But his behavior towards love interest Colleen Wing is much worse. Much has been made of the fact that immediately upon encountering an Asian woman, he starts speaking to her in Mandarin despite not knowing anything about her, but I’d like to point out that he pairs another bit of disrespect with his flagrant racism: Colleen’s in the process of putting up flyers advertising her dojo, and he promptly tears one down to ask her about it, even though they are both literally standing two feet away from it and he could just point. Dude! She just put that sign up! Leave it alone!

Danny then proceeds to ask for a job. Colleen turns him down and walks away, so he shows up at her dojo (which is also her home, because if Danny Rand wants to be in a woman’s house, he will enter her house with or without permission), mansplains her business to her (and whitesplains martial arts), and asks for a job again. In the next episode, when he’s locked in a mental institution, he calls Colleen for help, even though everything I’ve just described is the sum total of their interaction – because why wouldn’t he have the right to demand a massive favor from a stranger?

After he escapes the institution, he trespasses on her good nature again and spends the night hiding at her dojo, which causes her to be attacked by henchmen in search of him. She tells him to be out by morning, which he translates as “wake her up by playing loud music while he exercises and doesn’t leave,” then wheedles her into letting him stay another week, then interrupts her class to call her class of non-white students “monkeys” and assaults a child with a practice sword.

(Sorry for the italics, guys. I just cannot believe that monkey line made it onto the show.)

Danny continues to treat Colleen like this for the remainder of the show – in particular, he’s notably disrespectful to both her and Claire Temple when he interrupts Claire’s private self-defense class with Colleen to pressure Colleen into eating a meal he has already ordered for both of them. He steamrolls over his female employees’ protests to demand opinions of them that could endanger their jobs, or to make them illegally provide him with controlled substances. (It’s worth noting that both women in this example are black.) And he startles his lawyer Jeri Hogarth so badly when he first accosts her that she feels the need to defend herself with pepper spray. 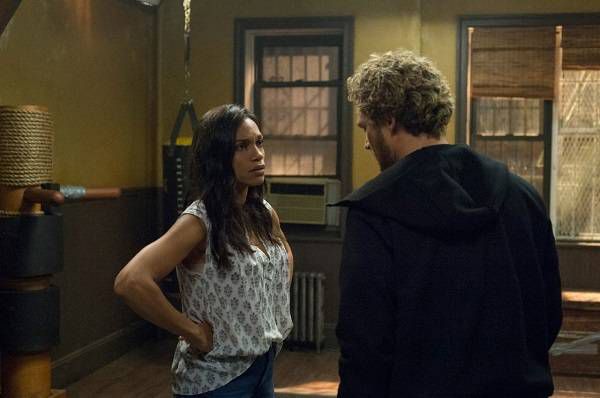 And yet for some reason, no one’s particularly mad at him about any of this? Joy keeps faith in him far longer than she should, Jeri goes to bat for him despite his being penniless, and Claire repeatedly risks her life assisting in his dumb schemes. Colleen, who Danny treats worst of all, inexplicably falls in love with him.

Why? Well, gosh, you guys, Danny’s just so nice.

Despite the comics-canon sexism of K’un Lun, Danny never says anything demeaning about women as a whole. He makes all of his unreasonable requests with a smile. He doesn’t threaten or force anyone, and he doesn’t start yelling at Claire and Colleen every time they open their mouths until the back half of the season.

He just consistently, willfully, cheerfully refuses to hear the word “no” when it comes out of the mouth of a woman.

I believe that the Jessica Jones writers knew what they were writing with Simpson. I don’t believe the same thing holds true here. I don’t think Danny’s behavior is intended to be sexist (and very, very racist, given that a woman of color’s “no” is worth even less to him than a white woman’s). Danny’s polite and cheerful when he disrespects and terrorizes the women in his life, so surely he’s A Good Dude, right?

All it takes, though, is a quick look at his actions to see the kind of person he really is.

Despite the massive disappointment that was Iron Fist (I like Danny in the comics! I wanted to like his show!), I’m looking forward to Defenders, if only because I doubt that either Jessica Jones or Misty Knight will have any patience for this sort of behavior. I hope Danny either drops this friendly stealth misogyny entirely, or gets smacked down for it right quick. And I hope any guys reading this who didn’t see anything wrong with how Danny treats women take a second look at whether or not they’re listening when women say no in real life.