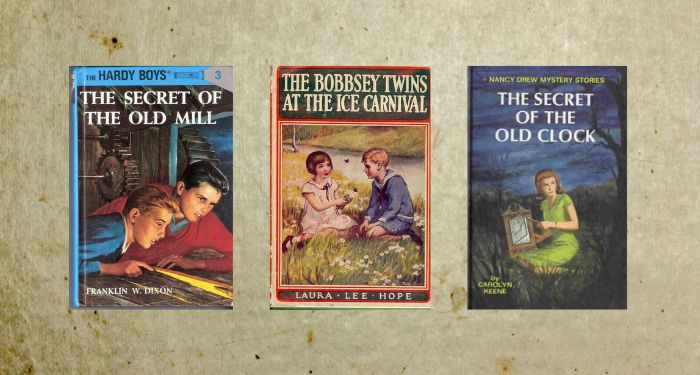 Book packaging and ghostwriting are a booming industry, but where did it start? One of the earliest packaging companies was the Stratemeyer Syndicate, created by Edward Stratemeyer in Newark, New Jersey, in either 1905 or 1906 (sources differ on the date), and run by his daughters after his death in 1930. The Syndicate continued operations under Harriet Stratemeyer Adams with Edna Stratemeyer Squier a mostly silent partner in the business, until the 1980s. When Adams died, Simon & Schuster purchased the company, and it was incorporated into their operations. In the years between, the Syndicate produced popular book series including Tom Swift, Nancy Drew, The Dana Girls, The Bobbsey Twins, and The Hardy Boys. But what was the Stratemeyer Syndicate, and how did they produce so many popular book series?

Edward Stratemeyer was born in Elizabeth, New Jersey, on October 4, 1862. His father Henry Stratemeyer had immigrated from Germany in 1837, had been a ‘49er — gold rush prospector — and returned to Elizabeth, where he married his brother’s widow Anna, who had three children. They had three more children, the youngest of whom was Edward.

An avid reader, when Edward was a teenager, he began printing original stories for his friends — we would now likely call his pamphlets zines — on a printing press in the basement of his father’s tobacco shop. He sold his first story at age 26 and went on to write dime novels, westerns, and magazine serials. In 1890 he moved to Newark and opened a paper goods shop, which he ran while continuing to write, often under pseudonyms.

In 1899 Stratemeyer, by then married and a father of two, began writing The Rover Boys, a series of adventure novels, under the name Arthur M. Winfield. A total of 30 titles were eventually published in the series, all of them believed to be written by Stratemeyer. (My library has several; they’re terrible, but even in just a few pages I can see why they were so popular — in his lifetime they sold 5 million copies.)

Two things seem to have been the leading factors in Stratemeyer’s move from writing his own stories to forming a content mill: one, books that bore his own name did not sell as well as books written under pseudonyms and two, he had, quite simply, more ideas than he could possibly write. He determined that he could be vastly more successful, and get more books into children’s hands, if he created series and hired ghostwriters to pen them.

He planned out the series and each book, writing an outline that would be handed over to a ghostwriter. Those writers were paid per book, and signed contracts that prevented them from publicly claiming authorship (essentially an NDA). The copyright belonged to the Syndicate, who sold the books to various publishing houses including Grosset & Dunlap for distribution.

Authors were paid in the $100–200 range, which was two months’ journalist salary at the time. It’s not a coincidence that many of the early writers for the Syndicate were journalists and/or dime novelists. The books were initially sold for 50¢, which was significantly less than other hardcover “juvenile” titles, and they were immediately popular. In addition to creating and overseeing book series, Stratemeyer was very active in book sales, creating promotional materials for booksellers to encourage them to carry the Syndicate’s work.

In 1914 Stratemeyer opened the first Syndicate office, moving operations from his home to a skyscraper near Madison Square Park in Manhattan. He hired Harriet Otis Smith as his secretary, though her work was more that of a second-in-command. Business was booming and Smith read the manuscripts authors sent in, wrote editorial notes for rewrite requests and in some cases did rewrites herself, and wrote outlines for new books. There is no evidence I can find that suggests she came up with new series ideas, but she has been credited with creating two of literature’s greatest sidekicks, Nancy Drew’s friends Bess Marvin and George Fayne.

Edward Stratemeyer died on May 10, 1930, after a bout of pneumonia. The first four Nancy Drew books, one of the Syndicate’s most successful series, had just been published. He left operations to his daughters, who relied heavily on Smith to teach them the business. When they closed the Manhattan office and moved operations back to New Jersey, Smith resigned, not wishing to commute that far. Agnes Pearson was hired on to assist the sisters; Squier moved to Florida in 1942, leaving operations to Adams.

Like her father, Adams was savvy in business. She oversaw operations, making sure the books stayed up-to-date in style and moral quality, and even rewrote several of the earliest Nancy Drew titles to modernize them. The Syndicate remained successful for decades, and their book series were so in demand that in 1979, when Adams made the decision to sell new books in the Hardy Boys, Nancy Drew, and Bobbsey Twins series to Simon & Schuster, previous publisher Grosset & Dunlap sued. After a lengthy battle in court, a judge ruled that the Syndicate could sell books to any publisher they wished, but that Grosset & Dunlap had the right to sell their already acquired titles — in hardcover only.

Adams died on March 27, 1982, and the Syndicate was left to financial partners who ultimately sold it to Simon & Schuster, ending a nearly 100-year reign for the Edward Stratemeyer’s company. Today there are many book packaging and ghostwriting companies, but Stratemeyer was there first.