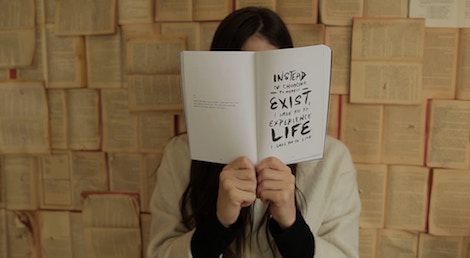 I don’t know how it started, but by the time I graduated high school, the quote wall had grown to take up literally my entire wall around my computer desk.

See, some people collect seashells or buttons or stamps or other trivial little things. I collect quotes.

When I was in middle school, my request at Christmas was for Bartlett’s Book of Quotations, which I got (and it’s gigantic) and readily devoured (okay, not all of it, because there are, like, a thousand pages of quotes in there).

I love quotations because it is a joy to find thoughts one might have, beautifully expressed with much authority by someone recognized wiser than oneself.

As a reader and a writer, the quote wall was important to me. I had a few categories of quotes:

I don’t do a lot of marginalia—writing in books has never really been my style. But sometimes, if something really catches my eye, it’ll make it onto my quote wall.

“But she finds it so difficult to verbalize, Charles dear. It helps her if she can quote instead of working out words of her own.” —Madeleine L’Engle, A Wrinkle in Time

Like Mrs. Who in A Wrinkle in Time, sometimes I feel that it’s difficult to put things into words. And what use is there, when someone else already has? (Okay, maybe that’s a bad thing for a writer to say, hang on, let me revise that). Sometimes it’s nice to be validated and to know that someone else has had the same thoughts as you, that, comfortingly, you’re not as revolutionary as you thought you were. Or, vice-versa, perhaps.

The quote wall has since been dismantled (apparently putting it on a wall near windows wasn’t the greatest idea if I wanted it to have any sort of permanence). It now resides in a commonplace notebook I started. That’s better anyway—it’s portable.