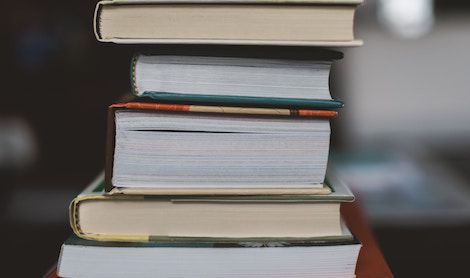 Are you tired of seeing the same types of books on Tinder over and over again? Their descriptions of themselves so formulaic that you could almost write the date yourself? We get it, girl. We’ve all been there, certain that we’ve found “the one” when really he’s just a run-of-the-mill, never-coming-out-in-paperback player. To save yourself some heartache, here are the six types of books on Tinder to keep an eye out for:

You’ll initially be wowed by his wise declarations about life and spirituality, and maybe you’ll get a few coffees together. Soon enough you’ll realize that this book just wants someone to take home to meet his mother and that actually his I-separated-this-sentence-into-its-own-paragraph nuggets of wisdom all sound like variations on the same thing and that thing is that one day we’re all going to die.

2. The One Life Experience Pony

A near-death experience really changes a person, did you know that? He does. It has made his whole world one big emotional journey that he will never stop grappling with. He will fill you in on a lot of specific details about his life before and after the incident as well, but at every story’s conclusion he will relate it back to that one moment where, in a flash, everything changed. What if he had chosen baseball instead of soccer? He never would have had a soccer ball in his car and he never would have been distracted trying to balance it on his nose while driving—if he had only chosen baseball!! The incident made him a different person. And eventually, a better person (it took some time).

He’s the serious, literary type. He’s distrustful of happy endings, which strikes you as realistic and refreshing, at first. But then over drinks he’ll describe in detail how his pet toad slowly withered and died. And that’s just his warm-up. He’ll be one-upping himself with human tragedy for as long as you can force yourself to stay on this date. You won’t be able to finish your dessert because of the pleasure he takes in telling you about the size of the cyst they removed from his back. Yes, he will admit that his life contained moments of levity and happiness along the way, but he has left those out. He doesn’t want you getting the wrong idea: his story is not one big happy-ending cliché, ok? That would be naïve and, frankly, dishonest to the brutality of life lived on planet Earth.

He will try to convince you that he’s fascinated by other people, a natural observer. The stories he tells aren’t about him, they’re about a painter he knows! Just like this date isn’t about him, it’s about you! A painter is not a writer and he did not climb Mt. Kilimanjaro, you did. But he did overcome crippling self-doubt in his own work and he did one time climb a fuck ton of stairs to see a 360 degree view of Venice.

5. The One That’s Only in it For the Sex

You know the type, of course. He’s the easiest punch line on Tinder. For him, interactions between men and women end in sex because how else can you both resolve scene and introduce conflict? Dialogue not flowing? Date didn’t go that well? He’s still going to go for it because how else would he close an awkward scene if not in bed? Cue music and cut to the next chapter.

6. The Six-Volume Series Self-Advertised as “Dazzling” and “Original”

This isn’t the kind of book you’re constantly seeing on Tinder, but when you do, you know they’re basically all the same. Maybe you’ll meet up for dinner or drinks, but you’ll barely get to know him because he’s so busy puzzling over life’s every mystery like why the barista didn’t make eye contact with him when he handed over his $5.95? He’s the brooding type, which you could definitely see yourself being into for one volume and maybe even two, but by volume three you’ll definitely get tired of the eye contact during sex.