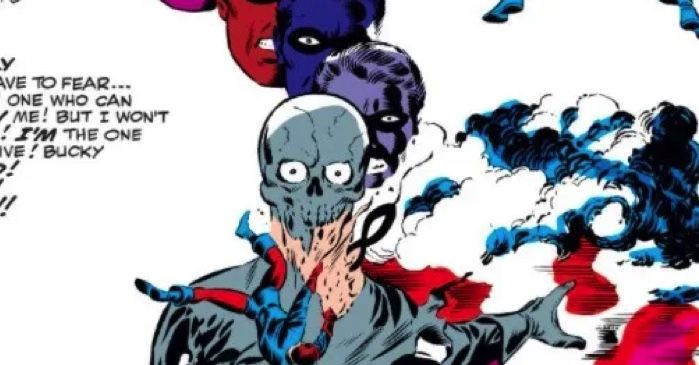 The Falcon and the Winter Soldier has got everyone excited about all things Cap-and-Bucky, so now’s as good a time as any to recall a short, little-remembered chapter in the duo’s history: the time Captain America replaced his dearly departed sidekick, Bucky.

Unlike Captain America himself, who has gone through a number of civilian identities, Cap’s sidekick Bucky has really only ever been one person: James Buchanan “Bucky” Barnes. Maybe this is because Bucky was his actual name, so giving away that identity would feel weird. Or maybe it’s because his “death” was so iconic and so instrumental in shaping Cap’s post-thaw character that replacing him was unthinkable.

And yet, in 1969, Marvel thought the unthinkable for the very first time: they allowed another teenage boy to don Bucky’s blue-and-red togs and follow Steve Rogers into battle. Who is this boy, you ask? Keep reading and you’ll find out, true believer…

I must confess that the character I discuss today is no longer the second Bucky but rather the third. After these comics were published, it was established that the “commie smasher” Cap and Bucky of the 1950s were distinct characters: William Burnside and Jack Monroe. So the real second Bucky would be Jack.

That said, Monroe hadn’t been created yet in 1969, so contemporary readers would have understood the subject of this article to be only the second person to wear the Bucky costume. Plus, I really like alliterative titles, so we’re going with it.

So, what lad was so loyal, so dedicated to justice that he could fill Bucky’s shoes? A lad named Rick Jones, who by this point already had a long history of working with superheroes. As the only person who knew the Hulk’s real identity, Rick would tag along and protect him as necessary. Later, he formed the Teen Brigade, a group of generic teen boys who occasionally assisted the Avengers with their sweet ham radio skills.

But merely assisting the Avengers and receiving sporadic training sessions from Captain America wasn’t enough for Rick. He wanted to be a real superhero. Specifically, he had imprinted on Captain America like a baby duckling to its mother. As a result, he dreamed of taking the dead Bucky’s place as Cap’s new partner.

That may sound innocent enough, at least in the world of superheroes, but Rick’s ambitions quickly took a turn for the creepy. In Avengers #7, he even sneaked into Cap’s closet, where Cap kept Bucky’s old uniform, and put it on in an ill-fated bid for the job.

This doesn’t work for reasons that should be blisteringly obvious, so Rick…waited a few years and tried the exact same stunt in Captain America #110.

This time, it works. Cap and Bucky ride again!

Their partnership was fraught from the beginning. Cap was still so haunted by Bucky’s death that he wouldn’t give Rick any breathing room, and Rick felt like a screw-up who would never get out of Bucky’s shadow. This was illustrated very clearly when Rick was drugged in Issue 111.

Also of note is the fact that no one ever calls Rick “Bucky.” Even in the midst of battle, Cap calls him “Rick” and nothing else. Maybe that’s not a big deal since, as I said, Rick had long been a known associate of the Avengers, so he doesn’t have much of a secret identity to protect. (This argument falls apart a little given that Cap soon fakes his own death just to preserve his own then-public identity. Clearly, secret identities are still important to him. But it’s the only reasonable explanation I can come up with, because otherwise, Cap is endangering Rick’s life by blabbing his real name to the underworld just because he can’t pull himself together enough to give the kid a code name.) But it does emphasize the gulf between the deified Bucky and the well-meaning wannabe.

Rick only got to wear the Bucky costume in Captain America #110–116, and even that’s overselling it: one issue consists of nothing but Rick-less flashbacks. The partnership came to an unceremonious close after Red Skull used the Cosmic Cube/Tesseract to take over Captain America’s body. In this guise, Red Skull told poor hapless Rick to take a hike.

Rick did manage to do something during his tenure as Cap’s sidekick: He helped defeat Madame Hydra and her hordes, as well as a contingent of A.I.M. scientists. But I guess that wasn’t enough to salvage what had always been a tenuous partnership: after Cap defeated Red Skull (with help from a new hero and future partner, the Falcon), he only cared about squaring things with his girlfriend. Rick didn’t even cross his mind.

Well, yeah, but not as Bucky. Even before the Red Skull stuck his nonexistent nose into things, Cap didn’t treat Rick very well. He was not emotionally ready to take on a partner, and he shouldn’t have allowed Rick, who is clearly not mature or sensitive enough for this gig, to guilt him into it.

So what did Rick get up to post-Bucky? If I tried to recap everything Rick Jones has been through since his not-Bucky days, we’d be here a while. He partnered with multiple other heroes and gained superpowers. He’s bounced back from being banished to the Negative Zone, irradiated, paralyzed, and forced to use nonsensical ’70s slang. But every time he comes close to achieving his youthful dream of being a superhero, as with his brief stint as Bucky, everything comes crashing to a halt sooner rather than later.

Don’t feel too bad for Rick, though: he was still able to do and see and experience a ton of amazing things. I guess it just goes to show that you can live a fulfilling life even if things don’t work out exactly the way you wanted. And all you have to do is sneak into your idol’s closet and put on his dead friend’s clothes. Twice.