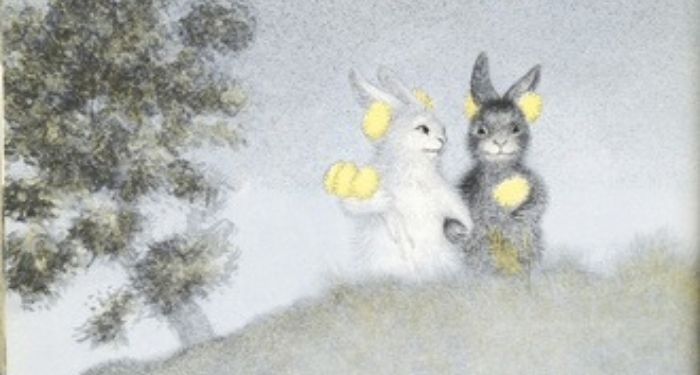 Picture this: you’re browsing your local bookstore in search of picture books for the little ones in your life. You stumble upon a large volume with a beautiful illustration of two rabbits on the cover. You glance at the title: The Rabbits’ Wedding. You promptly decide that, because the rabbits in question are black and white respectively, this book is a sneaky way of promoting interracial marriage. Not only that, the mere thought that it may in fact promote marriage equality infuriates you to the point that you do everything in your power to get it banned.

Sounds ridiculous? Of course it does. But this is what happened with Garth Williams’ 1958 children’s book The Rabbits’ Wedding.

The story itself is simple and straightforward: a male rabbit wants to marry a female rabbit, but he has a hard time finding the courage to propose. Eventually he does so, she says yes, and they get married in front of their woodland friends. The book closes on a celebration in the forest.

That’s it. That’s the story. This is what a group of people in Alabama, led by State Senator Edward Oswell Eddins, found so enraging.

Both the story and the illustrations are the work of Garth Williams, illustrator of beloved children’s classics Charlotte’s Web, Stuart Little, and Little House on the Prairie. It was the only one of his books to be banned.

For the most part, the initial critical reception was favorable: Commonweal wrote that “even in the rabbit world, popping the question can take a long time. The reviewer thought the illustrations soft and amiable.” Horn Book said that “the story has the warmth and security small children love with a happy ending […] the picture Mr. Williams has made of (the final) scene has the magic quality of something one might be allowed to see if one were very young indeed and out alone on Midsummer Eve.”

Library Journal‘s starred review was particularly complimentary, calling it “a large picture book of unusual beauty […] mysterious, enchanting […] A book which will delight the youngest ones.” Only the Bulletin for the Center for Children’s Books’ review was negative, both of the story itself and of the message the reviewer inferred: “While the book gives a very simple concept of love and marriage, confusion could arise about marital practices in the human and animal worlds.”

One wonders if this is how the White Citizens Council of Montgomery, Alabama, heard of this book. However it came to their attention, they decided to counter a sweet children’s story about two rabbits’ love with hatred.

The Rabbits’ Wedding was published on April 30, 1958, 9 years before Loving v. Virginia legalized interracial marriage all throughout the United States. The real controversy started the year after publication, when Alabama senator E. O. Eddins claimed that it was “propaganda for integration and intermarriage.”

He, along with the white Citizens Council of Montgomery, challenged the book and set out to have it banned. When Emily Wheelock Reed, director of the Alabama Public Library Service Division, defended the book, Eddins claimed that she “put stock in racial incorporation” and said that “this book and many others should be taken off the shelves and burned.”

Ah, yes. Burning books. Where have I heard that one before.

The white Citizens Council and Eddins got their wish: The Rabbits’ Wedding was banned from all libraries in Alabama. Reed found a way to get around that, however; she put it on reserve, so that it would still be available for librarians, but she could no longer keep it in general circulation. She then became a target. That same year, she distributed a reading list which included Rev. Dr. Martin Luther King Jr.’s Stride Toward Freedom; this awoke the Council’s ire once again.

Garth Williams response was masterful. In a 1959 interview with The New York Times, he said that the book “was not written for adults who will not understand it, because it is only about a soft, furry love and has no hidden messages of hate.” He went on to say, scathingly, that he “was completely unaware that animals with white furs, such as white polar bears and white dogs and white rabbits, were considered blood relations of white human beings. I was only aware that a white horse next to a black horse looks very picturesque.”

When I first heard about this controversy, I had two main thoughts, very close together: a) They really thought that a story about two rabbits getting married said something about human marriage?; and immediately after that one, b) So what if it had?

Then I realized how little things have changed: book banning is at an all-time high in the United States, basic human rights are contested every day, and hate is still prevalent in society. It was discouraging, for sure, but it reminded me of the necessity of never taking human decency for granted — and of the importance of calling out bigotry when you see it, of fighting book bans, and, oh yeah, of learning about how color works in picture books.