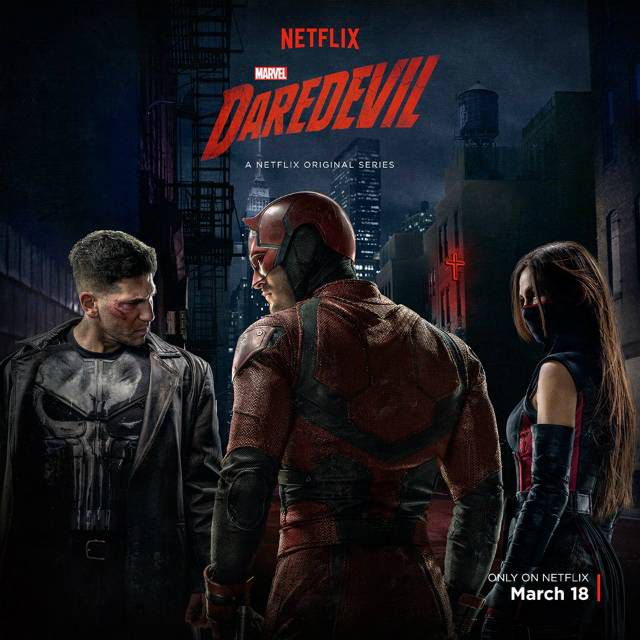 SPOILERS AHEAD. YOU HAVE BEEN WARNED.

There was a lot to love in Daredevil season 2. Those sweet moments between Matt and Karen. Karen discovering her talent for reporting. Foggy’s super-lawyer moments. Elodie Yung’s magnetic portrayal of Elektra.

And, well, there were some things to hate. The plot threads got a little messy. Foggy remained petulant all season long. Wilson Fisk felt really shoehorned in.

But most puzzling of all was the the double standard in play between Daredevil’s condemnation of the Punisher for the same thing he faces and eventually accepts about Elektra. You know, that thing where they keep murdering people.

That was a pretty long run-on sentence, so let’s unpack this a bit.

The season starts with the discovery of a new vigilante in Hell’s Kitchen—the Punisher. Except this guy is putting a less favorable spin on what it means to be a vigilante, compared to Daredevil, because instead of turning over his victims to the police, the Punisher kills them. As a result, the entire city is rethinking its tolerance of vigilantes in general, including Daredevil himself.

The whole killing thing breaks Matt’s moral code (plus it puts him in a bit of an awkward position with the city). So he slaps on his Daredevil gear and pursues the Punisher.

Despite the cold-hearted violence, the Punisher quickly becomes more relatable as we come to understand his backstory. Let’s be real: We’d all probably lose it a little if we saw our family murdered in cold blood for no good reason.

But to Daredevil, the Punisher continues to be judged in simple black and white—the Punisher kills, and thus there is no acceptable end for him except to rot in prison (or maybe, be rehabbed in government custody. Matt was so MIA during the court case that I can’t honestly remember if he was part of any of that deliberation with Foggy and Karen).

In the middle of this, Elektra reappears, bringing with her some serious baggage for Matt. Elektra was Matt’s college sweetheart–though “sweet” certainly does not apply to their relationship. She drew out his dark side—the part of Matt that later is channelled into Daredevil.

Their relationship originally fell apart when Elektra urged Matt to murder the man who ordered his father’s killing, and Matt refused. The paths they took in the years in between reflect their choices that night—Matt becomes Daredevil, while Elektra embraces her bloodthirsty nature as a warrior for Stick.

The dichotomy between how Matt responds to the Punisher and Elektra starts almost as soon as Elektra enters the story. While he actively pursues the Punisher and tries to stop him, his first impulse is to avoid Elektra at all costs. Daredevil does try to talk to each of them at different points about the errors of their Machiavellian approach, and fails both times.

But while Matt continues to fight the Punisher after this confrontation, he falls back in love with Elektra. When “trying to be good” doesn’t work out for her so well—because, as she explains, she enjoys killing too much—Matt simply accepts it as part of who she is.

When you lay it all out, Elektra is basically a glorified Dexter—a psychotic, compulsive murderer who has learned to channel something very dark in herself to try to get some kind of good end result from it. I’d argue that the Punisher is actually the less dangerous of these two, as he seems to have more control over his actions.

Which brings us back to the issue I cannot resolve: How can Daredevil accept impulsive murders in combat from Elektra, but not the carefully measured justice killings from the Punisher?

The answer, of course, lies in the symbolism these characters hold for Matt’s internal over the course of the season. Both characters represent something deeply personal for Daredevil.

But the part of Matt Murdock that is Daredevil doesn’t want to be restrained—something in him wants to be free, even reckless. Which is what Elektra allows him to be.

Elektra seems symptomatic of a psychotic compulsion inside Matt—whatever it is inside him that won’t let him walk away from Daredevil and have the full, happy life that wait for him with Foggy and Karen. It’s soothing he hates to love about himself, but can’t let go of, either. For much of the season Matt struggles with this dichotomy and even fleetingly considers letting go of Daredevil, or so it seems. But he can’t.

HIs response to Elektra shadows his internal struggle with this compulsion—first to run from it, then to try to subdue it, and then finally, to accept it.

So fine. On a symbolic level, the dichotomy makes sense. But on a plot level, as full, breathing characters on the screen, these two antiheroes come together to expose a serious hypocrisy within Matt Murdock.