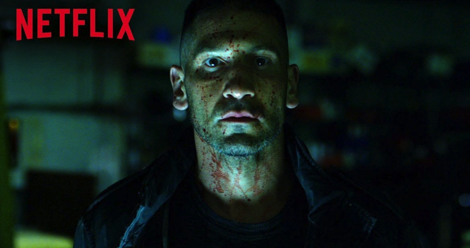 When Marvel and Netflix announced after Season 2 of Daredevil that they’d be giving the Punisher a spinoff show, I wasn’t thrilled.

In part this was because I found Elektra to be a far more compelling character, and despite a decade of shows and movies the MCU still only has one woman-led property (Jessica Jones) and none headlined by a woman of color.

But it was also because I felt that to continue to make Punisher comics, shows, and movies in our current political climate was at the very best in wildly poor taste, and at worst potentially dangerous. I wrote about that here.

The Punisher is out now, and I’ve watched all 13 episodes. If you’re looking for a non-spoilery capsule review, here it is: The Punisher is a very smartly written and brilliantly acted indictment of the military industrial complex and the way the United States exploits and then betrays the young men and women who fight for it…that also thinks the military is super duper cool and badass.

If you’re cool with spoilers, let’s unpack that a little bit more: 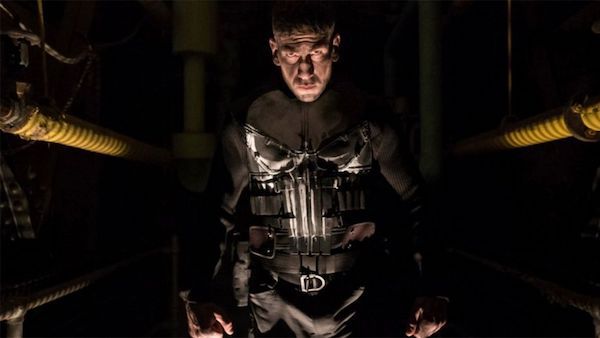 I want to get this out of the way first: as I said, Punisher is both well-written and well-acted. Jon Bernthal’s performance is Frank Castle is an absolute tour de force in an overall stellar cast. The dialogue is intelligent, the rare moments of humor are legitimately funny, the use of music is clever, the cinematography is great. The fight scenes are fantastic (when they’re not too gory to watch). Hell, it’s a Netflix Marvel show that’s actually well-lit, which is a shocking rarity.

And this is a show with something to say. The vast majority of the characters are ex-military or feds who have been treated abominably by their government: Frank’s family was murdered because of his knowledge of the illegal executions he was made to commit while on active duty; Micro was nearly killed by government spooks and had to fake his death; Madani was reassigned and stonewalled when she asked too many times about her partner’s murder; Lewis returned from war with severe PTSD (honestly, you could make a case for every character suffering from PTSD); and Curtis lost a leg.

Some of the best scenes on the show take place in Curtis’s support group for veterans, with Frank lurking in the shadows, stealing scraps of therapy like a starving alley cat. The show takes pains to depict the post-military experience with nuance and respect, portraying a range of viewpoints and stages of recovery, with deep sympathy for what the men and women it’s representing have gone through and are still going through.

The thing is, that’s sort of the problem.

Frank is so sad, you guys! He loved his wife and kids so much. He was a good soldier and good friend. He’s respectful to women and smolders tragically in Karen Page’s direction with the best repressed longing since Colin Firth climbed out of the lake at Pemberley. He teaches Micro’s daughter how to fix the garbage disposal and plays catch with Micro’s son and plays guitar and does shirtless chin-ups and he’s tragic and beautiful and brave. 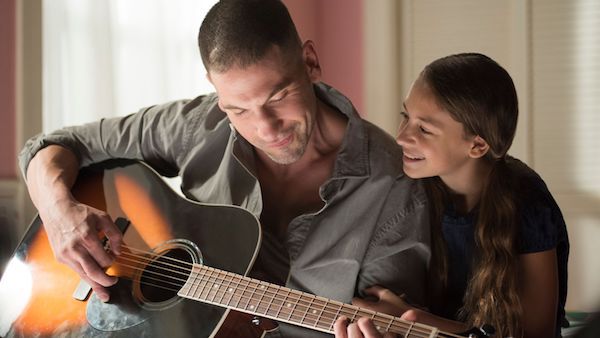 He’s also a mass murderer many, many times over.

The show likes to forget this when it feels like it. “He’s not a terrorist!” Karen says, over and over, as if the fact that Frank doesn’t have any political ideology to speak of means it’s okay to spray bullets everywhere. “THIS MAN IS DYING FOR YOUR JUSTICE!” Micro screams at Madani towards the end, as if Frank killed a man by sticking his fingers into his brain through his eye sockets (I…think? I couldn’t watch that bit) for God and country and not his own quest for vengeance. “Thank you,” two teenagers sob into Frank’s shoulders after he sadistically grinds his best friend’s face into broken glass for a minute and a half.

This hits its nadir in episodes 9 and 10, where the show unwisely decides to tackle gun control because it pretty much knows it has to. Lewis, our tragic baby veteran, starts planting bombs to forward his pro-Second Amendment agenda. This gives the show a chance to bring in a pro-gun control strawman, a craven senator who spouts glib misrepresentations of the argument for gun control but happily sacrifices Karen to save his own skin.

Right. Because the problem with this country is not enough angry young men shooting people in the face.

I wrote the article linked above a month after the Pulse nightclub shooting. That was less than 18 months ago and in the interim we’ve had 517 mass shootings, including the October 1st shooting in Las Vegas, in which 59 people were killed and over 500 injured. The Punisher panel at NYCC later that month was actually canceled and the show’s release date pushed back out of respect for the victims. Between NYCC and the show’s November 17th release date, a gunman killed 26 people at the First Baptist Church in Sutherland Springs, Texas. In fact, there were 47 mass shootings between Las Vegas and Punisher’s release.

Despite executive producer Jeph Loeb somewhat bafflingly declaring that The Punisher—The Punisher!—was not a show about gun violence, Bernthal said when asked about the shootings that he hoped the show would “spark debate” about the issue.

The problem is that under the group therapy scenes and prestige television trappings, The Punisher is still recycling that familiar and most destructive of American myths: everything bad in the world can be solved by a good guy with a gun.

Madani can’t expose Agent Orange and avenge her partner’s murder using the system—Frank has to do it. The authorities can’t save Micro’s family when they’re kidnapped, because it’s the authorities who kidnapped them—Frank has to do it. Billy’s legally sanctioned team, plus a mass of feds and NYPD, can’t stop Lewis from killing Karen—Frank has to do it. Miraculously surviving shootouts, never hitting someone he doesn’t intend to, scoffing at anti-gun rhetoric as he Die Hards his way through a hotel full of enemies. Yippee ki-yay, true believers! 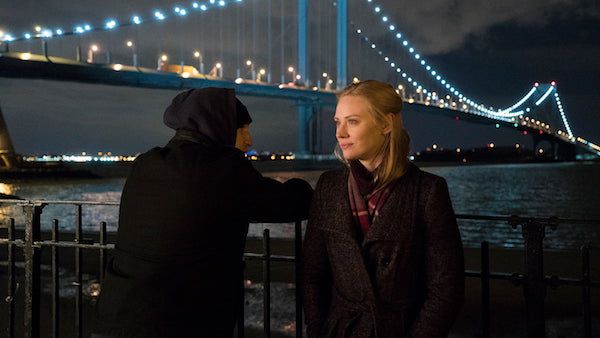 The show blows off real logic-based arguments about gun control in favor of striking at the emotions. When Sarah and Zach Lieberman are kidnapped, it’s impossible to avoid that knee-jerk impulse to cry “Save them, Frank!” (Even if Zach is kind of a little shit.) We want Frank to succeed, and we want him to look dope as hell doing it. Heck, even Billy gets in on this action. He may be a bad guy, but what’s the point of playing some real braggy Creedence Clearwater Revival as he struts out of his apartment, capping Homeland agents with perfect headshots on the beat, if not to make the viewer think “Damn, that is cool”?

Look, we’re all intelligent adults here. But we also possess the capacity to be affected and manipulated by art. That’s what art is. Just because I think the Punisher is a wildly problematic concept didn’t stop me from watching bullies pick on him in the first episode and gleefully anticipating the unavoidable moment he would kill them all with a sledgehammer. And just because I know that neither Frank nor Billy are reliable narrators doesn’t mean that when they call Lewis a coward my heart doesn’t tell me they know what real courage is.

What it boils down to is this: the best Punisher stories—and this show is one of the best—exist to show how dreadful and pointlessly destructive it is to be the Punisher. But they cannot help but undercut their own argument by giving him necessary work taking down people who are worse than him. And the more tormented Frank becomes, the more sympathetic—and, dangerously, relatable—he becomes as well. He’s a good man, stories like The Punisher tell us, doing what needs to be done.

If we knew we could relegate this mindset solely to the world of fiction, I wouldn’t care. But those 517 mass shootings I mentioned suggest that we can’t.

I like Frank Castle. I’ve read hundreds of comics about him. I enjoyed his show, and I respect the skill that it was constructed with.

But from a rhetorical perspective, it’s at best incoherent, and at worst adding more fuel to a fire that’s already raging out of control. You cannot tell us how terrible violence is while indulging gleefully and voyeuristically in that same violence. And you cannot say that your show is “not about gun violence” when all it’s about is that tragic good man with a gun.

I know Punisher’s already had a Season 2 greenlit, and let’s be honest, I’ll probably watch it. But come on, Netflix. There’s still time to make an Elektra show instead.