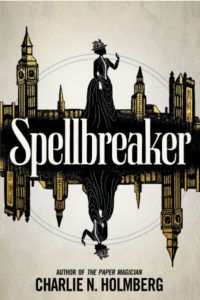 Elsie Camden learned as a girl that there are two kinds of wizards in the late Victorian world: those who can cast spells and those, like her, who can break them. Her gift is considered a crime. Nevertheless, Elsie uses her rogue spellbreaking to help the common man. She always did love the tale of Robin Hood. But when wizards start getting murdered, Elsie is compelled to uncover the truth. Can she, with the help of a handsome ally in magic, uncover the mystery before it’s too late to save everything she loves? Read Spellbreaker by Charlie N. Holmberg.

We’ve written before about how librarians are stereotyped and portrayed in pop culture, and I have personally waited a long time for an accurate portrayal of librarianship on film. While Emilio Estevez’s The Public is not a perfect movie, it mostly does the job.

The Public revolves around a downtown Cincinnati library being taken over for a political protest. One sub-zero night, librarian Stuart makes the choice to support some of his regular homeless patrons when they come to him with a plan to occupy the library overnight due to a lack of shelter space. As police, media, and politicians, become involved, security staff and other librarians (Myra and Anderson) struggle with how to proceed.

The Public begins by contrasting current public library work with vintage reels that promote librarianship as the perfect job for book lovers who enjoy helping people. While a love of books and encouraging literacy is exactly what drew me to library work, that can be a small part. I’ve spent the last five plus years working full time in public libraries—both in smaller, suburban systems and in larger city ones. I probably have a handful of book-related reference questions a day, and the rest of my shift is a mix of digital questions, monitoring that the space is safe and tidy, speaking with patrons, planning and hosting programming, collection development (suggesting new books, removing ones that don’t circulate anymore), and researching and answering reference questions about a myriad of general topics.

Early on in The Public, a character says to Stuart: “It must be really nice to have a job where you get to sit around and read all day, huh?” Oh, oh how I wish. That is the dream, my friends. Every library staff member has heard this statement a million times before. And hey, non-librarians, it isn’t entirely your fault that you don’t know—I went into the field thinking that. And what we learn in school isn’t even especially useful in our day to day jobs—I’ve never needed to know how to catalogue from scratch, but a crash course in social services would have been cool. (If you are a librarian struggling with some of those issues, I recommend Ryan Dowd’s insightful Librarian’s Guide to Homelessness.)

Many of the interactions shown in the film’s first 20 minutes were recognizable to me: people lined up pre-opening (despite horrible weather); librarians chatting to everyday regulars; the reference question sequence (“I got a quote from a book I turned in, like, last week. I forgot the author and, uh, the title but it’s red and I found it on the top shelf. Can you find it for me?”); even the patron with mental illness standing naked in front of a window and singing was not surprising. Have I seen that exact thing? No. But I have seen very similar things.

The film deals with the issue of patron complaints and personal rights. Before everything goes down, Stuart is informed that he is being sued because he had a patron removed from the library because of body odour. That is a constant juggling act that most librarians will relate to. I’ve dealt with complaints from patrons—”that person smells” or “that person has too many bags”. Balancing conflicting rights is a hugely complex part of library work. Some patrons might feel like the library is too loud, while another group can’t find an appropriate place to work on a project together. Balancing conflicts was key in inspiring Estevez when he wrote The Public. In a Forbes article, he credited Chip Ward’s 2007 op-ed about libraries and homelessness: What They Didn’t Teach Us in Library School: The Public Library as an Asylum for the Homeless.

As they head home from a typical day of work, Myra says to Stuart, “I do go home sometimes and cry myself to sleep because…we’re only human, right?” At one point, Myra holds a patron in the midst of a seizure and, while I, thankfully, haven’t dealt with that specifically before, I have been on hand during medical emergencies. In some places, librarians are trained in administering anti-overdose medication. Fobazi Ettar writes in Vocational Awe and Librarianship that “this expectation has gone so far as to create a precedent […] No longer are these trainings voluntary ‘extra’ professional development”. Staff funding gets cut, jobs are left empty, and duties expand steadily (Ettarh calls this “job creep”). So librarians are doing more work for little-to-no extra money, and many of them are working in precarious, temporary positions with little hope that they will become full time or permanent anytime soon.

Burnout is clearly an issue in The Public. Stuart, Myra and Anderson wander the film looking bereft. Stuart, a supervisor, really cares about his patrons and knows the regulars by name, but he looks wrecked. He barely smiles throughout the film. Myra is idealistic but also angry, petitioning Stuart to be working more with books and less with the general public. Their boss, Anderson, is well-meaning but seems disheartened, distracted, and as though he has emotionally checked out. While there is also a lot of joy in library work as well, this version of library life has some truth to it.

Recently, Lynne Stahl perfectly summed up people’s attitudes toward librarians: “Contemptuous ignorance and broad-strokes adulation are two symptoms of one pervasive problem: as a society, we have a woeful understanding of what librarians do.” Also, given the public perception of library work, many newbie librarians don’t realize before they begin working what their job will look like—and that definitely leads to a lot of burnt out library staff. And you can say, well, maybe this isn’t the job for you then— but new librarians just completed a three year Masters program, so what should they do next? Instead of blaming staff, there should be more education about modern public library work.

Given how little people know, it is clear that the film has to try and provide a lot of context and information for the average audience member. At points, the heavy-handed dialogue can be off-putting. I don’t know many librarians who speak like textbooks the way they do in the film:

And you know what? Fine. At times, this movie might be earnest to the point of cheesy, but I appreciated that it is addressing some of the reality of public library work. I dug these exhausted librarians, just trying to do their best. If The Public gives viewers more of an accurate idea of what librarianship is like, I’m thankful for it.