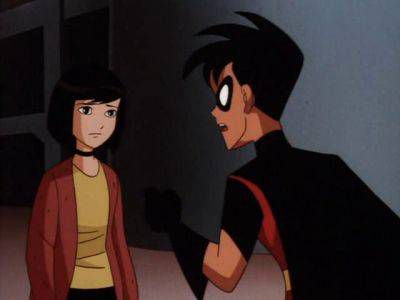 Batman: The Animated Series had quite an impact on fans from the 1990s, and on the various narratives that the mythos adopted. Classic villains gained sympathetic backstories, the city of Gotham attained a believable surreal noir quality.

Despite these homages to the Golden and Dark Age, however, one theme persisted through each season: Batman can never be happy, and neither can his family. Bruce in the Mask of the Phantasm movie struggled with the idea of happiness, and how it eluded him when he considered sacrificing his vow to avenge his parents to spend his life with someone living.

As the series went on, the happy endings eroded. Major and minor characters alike became miserable due to tragedy and neglect. Dick Grayson, for example started out as a cheerful sidekick, and ended as an angry loner. Barbara Gordon saved her father from a frame-up but sustained an unhealthy relationship with Bruce Wayne that left both of them bitter. Tim Drake, the second Robin, revealed his hero worship of Batman from the slums and then his trauma from three weeks with the Joker. The new Batman of the future, Terry McGinnis, had to receive a lecture to not repeat his predecessor’s mistakes and take care of his loved ones, so as to retain his happiness and big heart. With that in mind, let’s explore one such tragedy in the present Gotham. 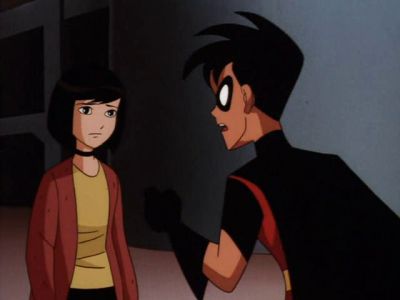 Annie, a minor character from “Growing Pains,” illustrates this theme perfectly. Tim Drake finds her running from a motorcycle gang and then from him. She has no home, and her father keeps chasing her. When her father appears, he proceeds to thrash Batman and Robin in battle before vanishing into the darkness. Robin decides to help her, since he was also a homeless runaway and didn’t have luck in the father department either. Annie, touched, by his kindness, accepts his help to find out who she is. Which led to them finding our her “father” was actually the villain Clayface, who wants to absorb her. In an ideal world, Annie would have survived and discovered shapeshifting powers like that of her father’s. She might have even become an honorary Bat with Bruce Wayne’s parenting and Robin’s friendship. In the Batman world, however . . .

Annie doesn’t live past one episode. The story makes it clear that the writers stuffed her in the fridge to bring out a lot of pain in Tim, although her twenty minutes onscreen made her a highly developed character for an amnesiac. She had potential as a contrasting character to Tim, sweet and yet important. The writers did a good job in developing her, so that she impacted Tim and the fans equally.

What would Annie surviving have meant, in any DC universe? You have someone who believes that she wasn’t real, that someone created her for a purpose. Annie violates her purpose — to see if the outside world was safe for a wounded father– due to amnesia. She spends most of the episode running from perceived and tangible threats, acting on self-preservation. Tim’s kindness breaks her terrified shell, and allows her to confide in him. She expresses fear that her father will hurt him, and joy at Tim’s little jokes. Despite knowing Tim’s enemy created her, she chooses Tim’s life over her own because of his actions.

This great episode lays a foundation for character development. We could have gotten several stories about Annie exploring her free will. She would want to decide if her self-preservation is part of her programming. We could have gotten discussions on how much her father has impacted her identity, and if she would overcome her limitations and fears.

Some writers have decided to explore Annie’s potential, with different angles. In the Gotham Adventures comics, a contrasting “daughter” to Clayface appears who has inherited her father’s powers and desire for revenge. Clayface makes sure that his creations obey in this incarnation. Katharine Karlo, who has a name and a proper identity, performs the job without fear or doubts. In short, she was the version of Annie that animated Clayface wanted.

With the new DC reboot, readers can hope that the writers can revisit Annie. Perhaps Clayface will successfully override her fear and free will. Perhaps she won’t receive the kindness that she received in one universe. Whatever the outcome, that potential exists, exciting and fresh.