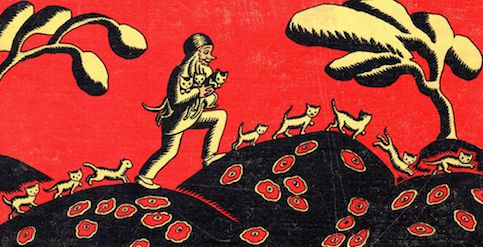 I don’t know if art is every really finished, but Gág certainly continued his work, becoming a prominent artist and illustrator. Then, in 1928, Gág published her first book, Millions of Cats, which was adapted from a story she had made up to entertain her friends’ children. Written and illustrated by Gág, it also featured hand-lettered text (created by her brother) and something brand new for picture books: the illustrated double-page spread.

As someone with millions of cats, I suspect this book is in print still because of how horrifyingly realistic it is (I kid!).

EMILY BRONTË’S SOLE NOVEL, PUBLISHED in 1847, largely takes place in two homes in the English countryside: Thrushcross Grange and Wuthering Heights. For centuries, literary enthusiasts around the world have speculated on the inspiration for the titular setting for this gothic-inspired tale, the remote farmhouse of the brooding Healthcliff. The architecture is described so precisely, the thinking goes, that it seems to be based more in reality than imagination. Ponden Hall, a farmhouse in West Yorkshire, England, bears a plaque above its front door that commemorates a grand renovation of the property in 1801—the same year in which Brontë’s novel begins. Given the fact that Brontë and her sisters (Charlotte and Anne, both beloved writers as well) are known to have visited the home’s library—it was then the largest private one in 19th-century Yorkshire—it has long been thought that Ponden Hall was a model for Emily’s tale. Now, nearly 500 years after it was first built, the historic house is up for sale.

Own your own piece of literary history.

The launch title for HarperVia is Lost in the Spanish Quarter by Heddi Goodrich, an American who lived in Naples for 10 years and wrote the book in Italian and did the English translation herself. It will be followed by It Would Be Night in Caracas by Karina Sainz Borgo, currently set to be published in 22 countries, and The German House by Annette Hess. Other authors who have been signed by HarperVia include Norwegian author Maja Lunde, Eric Dupont of Canada, Amir Ahmadi Arian from Iran, and Korea’s Won-pyung Sohn.