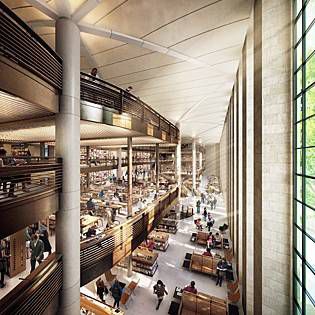 Yesterday, The New York Public Library unveiled the plans for a 5-year, $300 million renovation of its flagship branch at 42nd & 6th in Manhattan. Designed by Pritzker-winning (think Nobel for architects) architecture firm Norman + Partners, the renovation keeps much of the original design, but trades considerable space for book storage for more inviting and usable space for patrons. The images of the new space and the diagrams of what is going where are worth checking out, but I think this brief walk-through video offers a pretty clear idea of what these changes will look like.

So, books (and I mean a lot of books) will be moved out of the main building; some will move to a new storage facility under Bryant Park (pretty cool) and some to an off-site facility in Princeton, New Jersey.

There is a conscious trade-off being made here, as a significant portion of the library’s collection will be harder to access, requiring a 24-hour retrieval process for much of the research collection.

The New York Public Library is making the tacit acknowledgment that space for people is more important than keeping books immediately accessible. It’s a somewhat controversial position, as it undermines much of what we think about when we think about libraries–that they are book repositories.

But, as books and information are increasingly digitally available, it is physical space to read, think, write, and research that is now scarce, especially as the always-expensive cost of living in New York City continues to rise. At my local Brooklyn branch of the NYPL, I’ve noticed that most patrons using the space aren’t interacting with the books on the shelves so much as they are using the desks, chairs, and computers as study, work, and creative space. As anyone who finds working or reading in a coffee shop or reading room knows, being in a certain environment can be enormously inspiring.

If we think of a library as first and foremost a repository for knowledge, learning, and creation, then it makes sense to reconfigure, at least to some degree, the physical layout of libraries. In the past, the books themselves embodied that mission. But now, as textual information is spread across a variety of networked platforms, the human side of that mission is becoming more central.

Some will perhaps decry these changes as the erosion of book-culture and call for a return to previous practices. Such reactions, however, don’t see that the libraries are changing because the world is changing, and that the still important work of the library goes on.