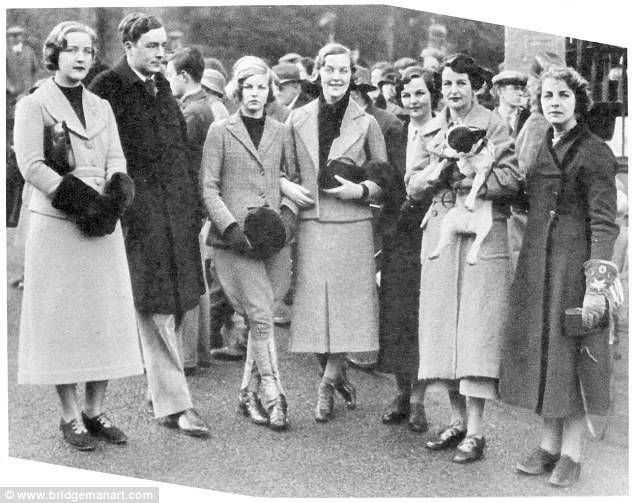 The Mitfords are on my mind. These six British sisters (there was also brother who died in War II) were gorgeous, charming, intelligent, and wild. They came from a wealthy, upper class family and that sense of privilege explains their fearlessness when it came to creating scandals. But in the end they are best remembered for their books and their politics—the former delightful, and the latter usually deplorable.

via The Daily Mail

Nancy, the eldest, was a celebrated writer who settled in France. Her wickedly funny, semi-autobiographical novels (some of which featured a version of her lover, a prominent French politician and a leader in the wartime resistance) are still available and beloved. Even better than the novels are her biographical works, like The Sun King about Louis XIV court in Versailles.

Diana, considered the most beautiful, married the heir to the Guinness brewery fortune only to abandon him for Oswald Mosley. Mosley was the leader of the Fascist Party in Britain. They would be married (after Mosley’s wife’s death) in Germany, at the home of the Goebbels, with Hitler as a guest. During the war Diana was rightfully despised by her countrymen, eventually classified a threat to national security, and imprisoned at her sisters Nancy’s and Jessica’s urging.

Jessica Mitford ran away with her second cousin, a young man named Esmond Romilly who shared her Communist politics and proved it by fighting in the Spanish Civil War. (He was also rumored to be the illegitimate son of Winston Churchill). She became pregnant and they married and eventually settled in America. When England declared war on Germany, Romilly joined the Royal Canadian Air Force, volunteered for service in Europe, and was declared missing in action. Jessica chose to remain in the United States and would eventually marry again—this time to an American Civil Rights lawyer.  She is best remembered as a Civil Rights activist and award winning, muck-raking journalist.  Perhaps her most famous book is The American Way of Death, which exposed corruption in the funeral service industry.

The sister with whom Jessica was closest before the war was Unity. The rift came when Unity joined the Nazi party and became a close friend of Hitler’s. When England declared war on Germany, she shot herself in the head in what was, ultimately, a failed suicide attempt. She died eight years later.

Pamela and Deborah were far less scandalous but just as independent as the rest of the clan. First married to a brilliant atomic physicist, after their divorce Pamela fell in love with an Italian horsewoman. The two women spent the rest of their lives together on a farm in the countryside.  The youngest Mitford, Deborah, would become the powerful Duchess of Devonshire, friend of the Kennedys (among other famous people) and the fierce guardian of her sisters’ legacies.

The details of the Mitfords’ lives are enthralling, and the short biographies I’ve provided don’t come close to doing them justice. Below are some books about the sisters — all of which do a much better job:

The Pursuit of Love, Love in a Cold Climate and Don’t Tell Alfred by Nancy Mitford—Semi-autobiographical novels that are wickedly funny. The heroine, Fanny Wincham, is based on a Mitford cousin.

Hons and Rebels by Jessica Mitford—Opinions on Jessica’s memoir divided the family, though the general consensus seems to be that she played fast and loose with the facts.

The Six: The Lives of the Mitford Sisters by Laura Thompson—The most recent biography of the sisters.

The Sisters: The Saga of the Mitford Family by Mary S. Lovell—Considered the authoritative book on the Mitfords.

The Mitfords: Letters Between Six Sisters, edited by Charlotte Mosley—All the Mitfords were brilliant correspondents. Funny, entertaining, gossipy; if you like reading other people’s letters than you’ll enjoy this one. The letters between the sisters leading up to and during the war are wonderful if you’re a history buff.

The Horror of Love: Nancy Mitford and Gaston Palewski in Paris and London by Lisa Hilton—Whether Nancy Mitford should be pitied for her relationship to the womanizing Palewski or celebrated for choosing to live her life as she saw fit is an open question.  This book sheds some light on the facts.

The Mitford sisters are gone now. Deborah, the youngest, died in 2014. As human beings they could be awful…certainly their politics were. I will never be a Mitford apologist, though they do exist. But it is interesting to consider them, and their different beliefs, in relation to the current political climate. What would they make of Trump’s America, Brexit or the global refugee crisis? Or do we already know? The similarities between their world and ours are both fascinating and deeply disturbing.