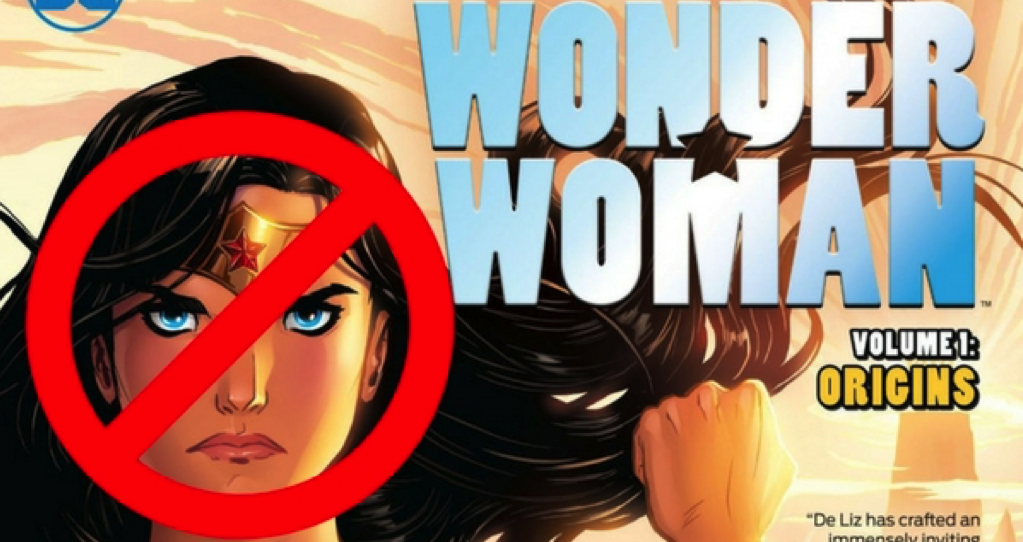 On Thursday evening, Renae De Liz, writer and penciller of the truly stellar The Legend of Wonder Woman, tweeted that the sequel series announced in May had been cancelled, leaving De Liz and husband/Legend of Wonder Woman inker Ray Dillon without a source of income just weeks before Christmas.

Although De Liz did not state why the book had been cancelled, she made clear it was not sales-based.

Also, no, sales wasn't the reason. Last I heard the hardcover was looking to do optimistically well.

This wasn’t simply a case of DC being shortsighted and not giving a book a chance to find its audience; there was something else going on.

Speculation on Twitter quickly turned to now-deleted tweets by De Liz from two days prior about the announcement of a new Wonder Woman prequel series, The Odyssey of the Amazons by Kevin Grevioux and Ryan Benjamin.  Fortunately, the tweets have been screen capped for posterity: 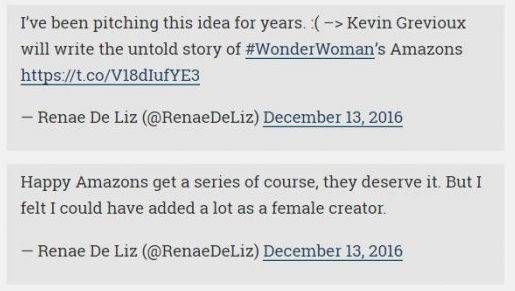 De Liz’s husband and co-creator Ray Dillon also tweeted his frustration about the new series, also focusing on De Liz’s prior pitches for the similar The Legend of the Amazons.

DC has a history of penalizing freelancers for comments seen as critical of the publisher. Anonymous sources within DC quickly confirmed this is indeed what happened, with The Beat reporting the tweets were “the culmination of a long series of problems” with Dillon in particular, and Bleeding Cool claiming that a Mary Sue article that quoted De Liz’s tweets was the last straw.

My own sources more or less confirm this narrative, emphasizing the cancellation was not in direct response to the tweets, but rather to the increasingly fraught relationship that led to them.

While DC has the legal right to hire and fire whomever they want (at least in the absence of an employment contract), and they may have had legitimate reasons to want to part ways with De Liz and Dillon, there are reasons to worry about the repercussions of this particular firing. 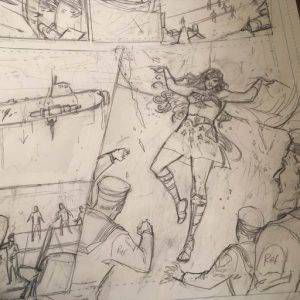 In an industry where women have been all-too-often sidelined and female creators often have to fight tooth-and-nail for any kind of recognition, it is deeply worrying that De Liz was fired following a statement about how female creators might be able to add something unique to stories about women. Whether DC intended it or not, at least some female creators will interpret this as a warning that they should stay quiet about their concerns about the comics industry or they too will be blacklisted.

And let there be no doubt about it: comics has a severe problem when it comes to hiring women, especially women writers. Wonder Woman, for instance, has been written by men for over 7o of her 75-year history, and the main series is once again being written by a man. Greg Rucka is an amazing writer and I am enjoying his current run, but a man should not have been given this book to write in 2016 (especially if rumors that Marguerite Bennett was fired from the book to make way for Rucka are true).

It’s not just Wonder Woman. Not a single woman’s name appears in the credits for DC’s current Supergirl series, reportedly because of an unofficial (and highly illegal) policy not to hire women on books edited by the Superman office in order to keep Group Editor Eddie Berganza away from temptation. And over at Marvel, three books starring Spider-Women are all written by men, including a book about Jessica Drew’s struggles as a working mom, while Gail Simone’s repeated statements about how much she would love to write a Spider-Man story have fallen on deaf ears. (There’s also the all-female X-Men book from a couple of years ago that was written by yet another man accused of sexual harassment, Brian Wood.)

This is an insanely sexist industry, and firing a woman who points that out perpetuates that sexism, even if she might have violated internal social media policies.

Of course, most sources seem to agree that De Liz wasn’t fired for what she said, instead claiming The Legend of Wonder Woman was cancelled primarily because of Dillon’s tweets on De Liz’s behalf. Again we see the sexism baked into the industry: De Liz is simultaneously not responsible for her own actions, while being punished for her husband’s actions. This unofficial (though widely reported) narrative denies De Liz agency.

(It is also interesting that no one at DC—or, from what I can tell, other comics journalists—seems to have considered the radical option of firing Dillon for his actions, but letting De Liz to continue writing and penciling the book with a different inker, color artist, and letterer.)

Comic creators are not the only ones whose speech will be chilled by DC’s actions here, though. By specifically pointing the blame at The Mary Sue, DC is discouraging comics journalists from reporting on legitimate issues of concern at the major publishers, lest we inadvertently get our favorite creators fired. This isn’t a hypothetical concern: in Bleeding Cool‘s piece on the firing, editor-in-chief Rich Johnston stated, “I have been in the exact same position that Mary Sue now finds itself,” expressly taking the blame for two prior firings. I have also heard the issue raised privately by other comics journalists.

This is not to say that DC intended to discourage female creators from raising concerns or comics journalists from reporting on them. But, ultimately, DC’s intentions are irrelevant; these are the natural result of their actions.

This doesn’t have to be the end of the story, though. Even large publishers sometimes realize they have made mistakes and act to rectify them. In December 2012, DC briefly fired Gail Simone from Batgirl, only to rehire her within two weeks. If a Christmas miracle could happen for Batgirl, maybe it can still happen for The Legend of Wonder Woman.

DC Comics did not reply to a request for comment on this story.