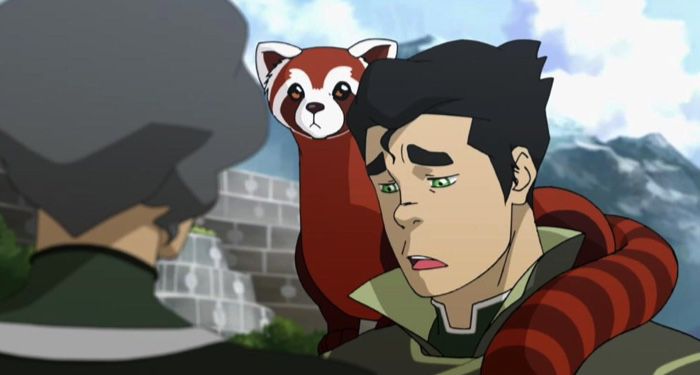 B-list heroes, however, haven’t gotten quite the same bump and I can think of a few who deserve a little love and air time. And with The Legend of Korra enjoying a resurgence thanks to its migration to Netflix in anticipation of an Avatar: The Last Airbender live-action series (anticipated air date: who the hell knows, die in a fire COVID-19) I thought it would be nice to take a little vacation from capes and tights. And since so many folx seem to be acquiring quarantine fur babies, I thought it might be fun to do a meet and greet with…

Pabu would like you to know that no, he is not a red panda, thank you very much, and was acquired by a pet shop owner as food for a pythanaconda. Deciding that he was meant for bigger and more long-lived things, Pabu made a bid for freedom by hitching a ride on a young man’s head. That young man was Bolin. Pythanaconda don’t give their lunch up easily (apparently) and the massive snake later found both Pabu and Bolin; Bolin’s firebending brother Mako was having none of that, however, and saved his younger sibling and the unintentional addition to their family. He agreed to let Bolin keep Pabu provided Bolin kept the critter fed.

Over the years, Bolin trained Pabu to do circus tricks and sometimes took his furry friend to perform under Zuko’s statue in Republic City. On one particular occasion, hoping to raise enough money for the Fire Ferrets—the team Bolin had formed with Mako and a third bender—to enter a pro-bending tournament, the duo was performing when Bolin was kidnapped by the terrorist Equalists. Pabu, who had escaped capture, found Mako and Korra then helped them track Bolin. When all three of the friends were captured after the pro-bending match, Pabu chewed through their ropes, allowing them to escape the massive explosion that destroyed the arena.

Pabu saved the day again when Team Avatar was captured along with General Iroh (Zuko’s grandson, second of his name) while attempting to destroy the Equalist airfield.

When Varrick cast Bolin as the star of The Adventures of Nuktuk: Hero of the South, Pabu went along for the ride, appearing on the silver screen alongside his master in the breakout role Juji the Snow Raccoon. He and Bolin later re-joined Team Avatar when its members relocated to stay with the Southern Water Tribe and stop Unalaq from presenting himself at the Harmonic Convergence that would open the way to the Spirit Realm. When Tenzin’s brother (and Aang and Katara’s oldest son) Bumi was separated from the group, Pabu located him and led him back to the others, who once more found themselves tied up and behind bars; of course it was Pabu who once more had to help bust them out (I think at this point we can all agree Team Avatar would have spent a lot more time out of commission and in restraints without Pabu).

The fire ferret was also an excellent alarm system, warning Bolin when Zaheer and the Red Lotus grabbed Korra in the middle of the night. It would have been better if Bolin hadn’t told him to go back to sleep the first time, but hey, it all turned out mostly okay in the end, right?

Mischievous but friendly, Pabu’s strong bond with Bolin never stopped him from holding strong opinions of his own, especially as regards being bathed (hates it) and being forced to hide in Bolin’s shirt for various and sundry reasons (also hates, especially if Bolin is sweaty). Pabu detests being left behind even more than he hates getting dunked in the tub and usually ignores commands to stay put. Which is probably a good thing since by the time he finds Team Avatar, its collective hands are usually bound by something and its collective bodies are usually trapped behind metal. Bolin’s friends are Pabu’s friends, though the fire ferret also builds his own squad which includes Korra’s polar bear dog Naga.

There are of course, plenty more fuzzy friends of all shapes and sizes where Pabu came from. Should we stick with magical pets for our next few B-lists? The world could certainly use more adorable animals right now…