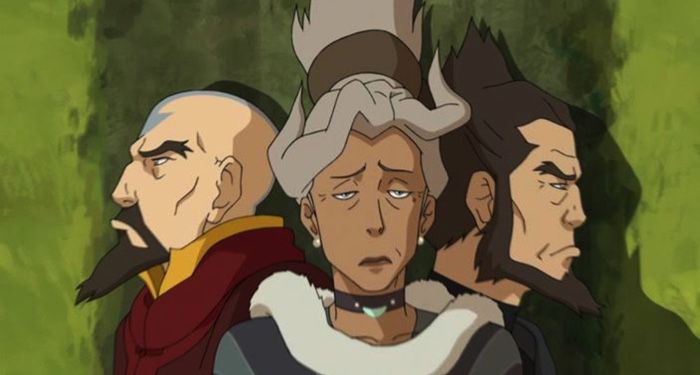 B-list heroes, however, haven’t gotten quite the same bump and I can think of a few who deserve a little love and air time. And with The Legend of Korra enjoying a resurgence thanks to its migration to Netflix in anticipation of an Avatar: The Last Airbender live-action series (anticipated air date: who the hell knows, die in a fire COVID-19) I thought it would be nice to take a little vacation from capes and tights to introduce y’all to some characters who might conceivably pop up at some point.

Bending Ability: Kya inherited Katara’s Waterbending ability. She is the first child of an Airbender to be born with non-Airbender abilities.

Younger sister to Bumi and older sister to Tenzin, Kya was closer to her mother than to her father. While she was inducted into Airbender culture she always felt that Aang was more concerned with his duties as the Avatar and with preserving Airbender culture, and thus educating and nurturing Tenzin, than spending time with his wife, Waterbending daughter, and non-bender son (which…I have to be honest, having watched Avatar: The Last Airbender and seen the way Aang reacted to the loss of his tribe, followed the story of his building a found family, his desperation to protect the people he loved I have never bought as true to character). Katara provided Kya with her training and helped her achieve Master Healer status, after which Kya travelled the world (Tenzin refers to this period as Kya’s “finding herself” which is hella condescending and for sure worthy of the teasing she tosses at him), returning home to live with Katara and the Southern Water Tribe after Aang’s death (which you’ll notice neither of her brothers could be arsed to do).

Reunited with her family at the Glacier Spirits Festival, Kya accompanies Tenzin and his family to the Southern Air Temple after Korra dismisses Tenzin as her teacher, intending to continue her education with the Southern Water Tribe. When one of Tenzin’s children disappears and Tenzin blames himself, Kya agrees, suggesting he, like their father, is paying too much attention to his political duties and not enough to his family.

It’s Kya who recognizes her niece Jinora’s special connection to the spirit world when Tenzin and others insist the girl is too young to understand such matters, and Kya who suggests that perhaps Jinora is the proper guide for Korra when the Avatar needs to make the journey herself. Kya is the one who most often takes it upon herself to protect Jinora’s body while her niece is in the spirit world and Kya who keeps Jinora’s physical body alive when her spirit fails to return until they are able to bring her to the more experienced Katara. She crosses into the spirit world to search for Jinora, then returns and immediately fights to protect Korra’s body as the Avatar fights to end the Water Tribe Civil War.

After Kuvira’s invasion of the Republic of Nations, Kya works as a healer at one of the refugee camps, and it is she who works with Mako in the unfortunately unsuccessfully attempt to revive his ability to Firebend with his left arm.

It is while she is working at the camp (in The Legend of Korra: Turf Wars) that Kya sees Korra and Asami return from their trip to the spirit world, which happened to also be their first trip as a couple. She is the first person outside of Korra’s family to learn of their relationship and the first person to whom they speak about their concerns regarding going public. Kya tells them the story of her first romantic getaway with her first girlfriend, tells them how accepting Aang had been of her coming out, and how Korra and Asami’s story was theirs alone. She also promises to provide council whenever the women need it and assures them of her support.

Kya is one of few confirmed LGBTQIA+ characters in the Avatar universe along with Korra and Asami, Aiwei, Kyoshi and Rangi, and Zenko and his unnamed husband.

Shall we continue with this Avatar and Korra journey? Aang and Katara did have three kids, after all. And Zuko’s daughter has a very capable son who inherited not only his great-great uncle’s name but also his beverage habit…