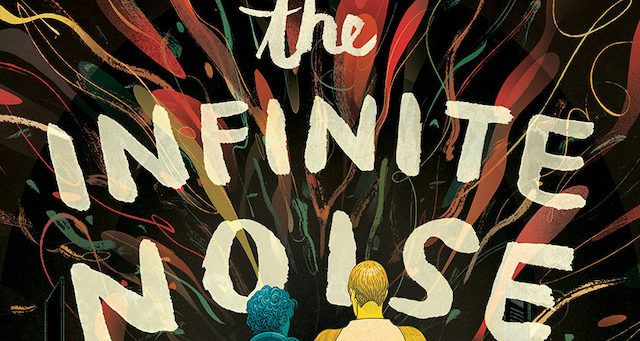 When I read Lauren Shippen’s The Infinite Noise, it was about three weeks out from my release from a long hospital stay and six weeks out from my fourth open heart surgery. I was still attached to an IV, suffering from insomnia, and unable to do so much as shower on my own. I’d all but forgotten what it felt like to be able to do simple tasks without even thinking, and no longer had the capacity to imagine a future without constant pain and discomfort.

This is the mental toll caused by living with chronic illness and experiencing its medical repercussions. And the inability to share my experience with others, simply because no one else has lived it and can’t truly know it, sinks me deeper and deeper into darkness and isolation.

For most of my life, books weren’t a place where I could see myself. For a long time, they served as an escape from my own life, not a reflection of it. When I finally, in recent years, began to see parts of myself represented more and more, I discovered the spark of warmth caused by feeling validated, and came to crave these moments more and more. But these feelings continue to elude me when it comes to the experience of chronic illness and its mental health effects.

The Infinite Noise is not about chronic illness or disability in any explicit way. But somehow, it does capture specific pieces of how I am forced to live and represents them with empathy and nuance. 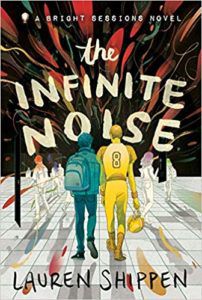 The Infinite Noise is the first in an upcoming trilogy of YA novels by Lauren Shippen, set in the universe of her popular fiction podcast The Bright Sessions. The podcast followed the therapist Dr. Bright and her patients, all of whom are people with supernatural abilities, known as Atypicals. Beyond being a captivating story, it is a brilliant and honest exploration of mental health inspired by Shippen’s own experiences.

Caleb and Adam, two beloved characters from the podcast, are the protagonists of The Infinite Noise. Caleb is one of Dr. Bright’s patients, and Adam is one of his classmates. The novel, narrated in alternating points of view, follows the two young men as they navigate high school and their growing feelings for each other, not to mention the discovery of Caleb’s ability.

Reading Caleb’s chapters, I was finally able to see myself in a way I’d never experienced before, despite the fact that the specifics of his experience are based in science fiction. Caleb is an empath, which means he can feel the emotions of the people around him as if they are his own. It isolates him from his classmates because just being in school, in close quarters with so many other students, is overwhelming. Not only does Caleb have his own share of emotions as a hormonal teenager, but they are exponentially amplified by those of everyone else. This is a weight he carries alone, without anyone being able to see it. My chronic illness, a congenital heart defect, is also completely invisible from the outside, and I alone feel its effects.

When living with chronic illness and disability, there are countless considerations to be made every single day, and we learn to live a certain way that accommodates our unique situations. Just as Caleb’s ability dictates his decisions about how and when he chooses to interact with others and what environments to expose himself to, my heart condition dictates the decisions I make in my everyday life. People like to talk about those who “don’t let disability define them.” The people who are happy, deemed “inspirational” and “brave,” who are living life to the fullest despite their illnesses. But I’ve always felt like that’s something of a myth. I’m not living “despite” my circumstances; I’m living around them. Without my disability, I’d have adopted a different clothing style, gotten a tattoo, traveled to more places. I wouldn’t live where I live, I would have pursued a different career, and I might have even considered having children. So it does define me, in a way. And though Caleb’s life with his ability has only begun, his small choices indicate a way of thinking and living that I am all too familiar with.

A particular challenge of living with invisible illness is communication. Most people wouldn’t know, just looking at me, that I live with serious health concerns, which means I have to tell them explicitly if I want them to have that information. But the idea of that conversation is paralyzing. The world has taught me to see myself as a burden, that others will see me that way too. So I’m scared to let anyone know, despite also feeling like I’m hiding something just by way of existing. In fact, I often find my own relationships being deeply affected by this fear, to the point where I even avoid getting close to people because of it. In The Infinite Noise, Caleb experiences extreme anxiety and insecurity when deciding to tell Adam about his ability and choosing how to go about it. He also feels somehow dishonest as long as Adam doesn’t know about his ability since, due to the very nature of it, Caleb has a window into Adam’s emotions and is able to know him with a degree of intimacy that he knows Adam never agreed to.

Caleb and I are both extremely fortunate to have supportive families who are willing and ready to take on whatever our circumstances throw at us. But no matter how sympathetic the people around you are, there are just some things they will never truly be able to understand. And when you feel like you stand out in your own family, it’s easy to think there’s no hope of feeling true belonging anywhere else. There’s an aspect of guilt as well, as I can’t help but to constantly apologize for “inconveniencing” my parents in various ways, even though I know I shouldn’t. Caleb loves and appreciates his family, but when he notices how guarded they become after learning of his ability, and the effort they put into suppressing themselves so as not to overwhelm him, he feels both alienated in his own home and sorry that they have to change anything about how they live day to day.

The Infinite Noise came to me right when I needed it. I was finally okay enough to read again, but still experiencing intense and unpredictable ups and downs, both mentally and physically. It was able to bring me comfort, as I was able to revisit characters I’d already grown to love in years past through The Bright Sessions podcast, while also allowing me to face a lot of my own complex feelings about my experiences with mental and physical health. Not only did Caleb’s chapters act as a mirror for my own experiences with chronic illness, but Adam’s chapters also reflected my own experiences with depression. Lauren Shippen writes with so much sensitivity and love for her characters, and reading her words became a significant part of my healing process. It doesn’t matter that Atypicals and their super abilities aren’t real; there is an incredible level of truth in The Infinite Noise, and for that I am grateful.