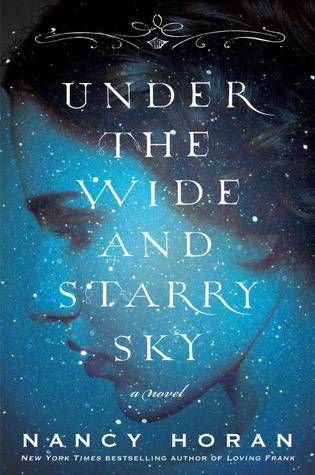 Nancy Horan writes what is quickly becoming my favorite type of historical literature: books about bad-ass women in the late 19th century who might have been lost in the annals of history if it were not for two things: the really famous men they were involved with, and Horan herself. You might recall Horan’s Loving Frank, the fictional bio told by Mamah, lover, muse and backbone to architect Frank Lloyd Wright. Horan’s latest heroine, Under the Wide and Starry Sky’s Fanny van de Grift Osbourne, is a mind-blowingly strong, capable, prairie-raised salt-of-the-earth American woman who hightails it from San Francisco to Europe for a multitude of reasons (drunk and cheating husband and a desire to study art with the masters are a few highlights). Fanny crosses the country and the ocean, with three children in tow; settles down in an artist colony and meet-cutes the man who will be the love of her life, the one she will literally follow to the ends of the earth: dashing, but frail and constantly ailing, Robert Louis Stevenson, author of such adventure gems as Treasure Island and Dr. Jekyll and Mr. Hyde, to name his most famous.

I devoured the book, which, like the adventure novels written by Stevenson, is a swashbuckling, continent-jumping love story with so much adventure and heart that you will feel like you are a part of the action yourself. Then I had to hear directly from the source, Ms. Horan, about her inspiration and process creating these characters who jump right off the pages of history, and into your head. The way all good characters do.

How did you come across Fanny Van de Grift Osbourne?
The pursuit of this story began when I was walking on a beach near Capitola, California. There is a marker on the beach indicating that at one time there was an encampment of Chinese fishermen living on that beach. I became interested and bought a book (Chinese Gold: The Chinese in the Monterey Bay Region, by Sandy Lydon) to learn more about them. I discovered from that book that Robert Louis Stevenson had written about the Chinese in the Monterey bay area and I was surprised that he had lived in Monterey for a while. The book I got next was a biography of Stevenson called Voyage to Windward by J.C. Furnas, published in 1948. That book introduced me to Fanny. I next read The Violent Friend by Margaret Mackay, which is a bio of Fanny. Following that I read a bio by Fanny’s sister. These sources engaged me and I went on to Fanny and Louis’s letters at UC-Berkeley and at Yale libraries, respectively, and on to the works written by RLS and also by Fanny.  She came from a very different world than RLS. I loved her grit. Though they were very different, they both took pleasure in adventure and literature.

Do you research, then write, or do both simultaneously?


I research for a few weeks to see if there is a story I can make out of these people and times. For this book I wrote a 25-page summary that helped me shape the arc and understand some of the thematic material of the book. Of course, there are always surprises—understandings and themes that rise up as I work. I love that part of it.

I read Under the Wide and Starry Sky and Loving Frank as books revolving around the women as a view to the men. Would you say that’s a thought you have in mind as you wrote both books? What is it about these pairings – particularly Fanny and Louis – that leads to such amazing book fodder?
After writing a first draft from four points of view for Loving Frank, I tossed that manuscript and started over, telling the story from one point of view—Mamah’s. So in that case, I would agree that the book was very much her view of Frank Lloyd Wright and the events that occurred during their time together. But Under the Wide and Starry Sky is told from two points of view: Fanny’s and Louis’s. (Stevenson was called Louis by his family and friends.) So half the book is his view of what happens. In both books, you have people who are on journeys, quite literally moving from place to place. There are forces bearing down on them. They are making choices under pressure, and they are facing the consequences.

Is it the romance behind the people, or the historical aspect you’re attracted to writing about?

Unusual Suspects Newsletter
Sign up to Unusual Suspects to receive news and recommendations for mystery/thriller readers.
Thank you for signing up! Keep an eye on your inbox.
By signing up you agree to our terms of use
First and foremost are character and story. History offers up big personalities and real stories that defy the imagination sometimes. In both of the novels I’ve done so far, I first became interested in the famous man. Soon enough I discovered a woman who was equally interesting to me, and central in each of those stories. So relationship became a focus. Relationship means something more complex to me than simply “romance.” Why history? The texture of everyday life in the past seems more exotic; I enjoy learning about it.

Were you creating voices for the main characters, or re-creating them, based on the diaries, journals, letters, etc. you read?
I like reading letters and diaries to get as close as I can to the speaking voices of these people. I look for distinctive words or expressions. And I sometimes weave actual quotes into the dialogue or paraphrase them, though most of the dialogue is invented. My understanding of how a character is feeling at a given time is enlarged by that person’s letters or diaries, but that information is not always available. In the case of Fanny and Louis, he was a prolific letter writer and she was a diary keeper.

When do you feel you need to deviate from the hard and fast facts to flesh out parts of your story of their lives?
So far I have chosen two stories that were rich with incident. Their main facts fascinated me. But there are always too many facts, especially in this 18-year story of Fanny and Louis, and the first task at hand was to decide upon the structural arc and the focus of the novel, then omit pieces of their history that did not serve the main story I wanted to tell. “Fleshing out” is just that: giving these characters physical bodies that pain or please them, emotions, perceptions, and so on; and inventing scenes that do not come from some historical record, but could have. An example is a scene in which Robert Louis Stevenson discusses the unconscious with his friend, Henry James. Did they sit down and converse about this? I don’t have any record they did, but they well could have, and it made sense in the novel, as that was a theme that was present.

What is your favorite historical fiction inspiration?
Kidnapped by Robert Louis Stevenson.