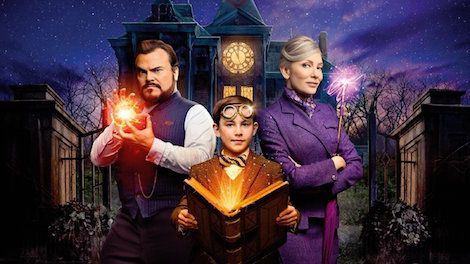 There’s a new movie out—perfect for fall—perfect for the Halloween season—perfect to scare the socks off kids.

The House with a Clock in Its Walls

The House with a Clock in Its Walls has a great title. Clocks portend doom. When Trump got elected President, the Doomsday Clock got closer to midnight. The Doomsday Clock “is a metaphor, a reminder of the perils we must address if we are to survive the planet.” Currently, the clock’s time is two minutes to midnight, the closest it’s been to midnight since the Cold War. John Bellairs wrote A House with a Clock in Its Walls during the Cold War. The Doomsday Clock existed when he wrote this book. It’s easy to believe that Bellairs, too, had the end times on his mind.

For Thou O God art my strength; why have you cast me off, and why do I go sorrowful, while the enemy afflicts me?

Why are thou sorrowful O my soul, and why do you trouble me?

Prayer can sound very sinister— I once sat through a homily (a Catholic sermon) in which the Priest explained in detail that receiving Communion was actually eating the flesh of Christ. He related a story of a saint that turned the Host into a heart muscle to demonstrate that it was more than symbolism.

He was reading about how the Scotch nobles had murdered poor Rizzio right in front of Mary, Queen of Scots. Stoddard compared Rizzio to a purple- velvet plum spurting plum juice in all directions.

This is not your typical Goosebumps- style story for kids. The House with a Clock in Its Walls is more Diana Wynne Jones’ Chrestomanci meets Edgar Allan Poe meets Roald Dahl’s The Witches. The menace drips off the page.

Lewis Barnavelt begins living with his Uncle Jonathan after his parents die in a car accident. Lewis is ten and has to move from Wisconsin to New Zebedee, Michigan. Tragedy and horror are very closely connected, and Bellairs deftly braids both themes throughout the story. In Bellairs’ New Zebedee death is not necessarily the end; pictures can move and change in the blink of an eye, clocks can tick away time without being wound, and doom can be foretold by the formation of the birds in the sky.

“The hookah was shaped like a Spanish galleon, and the crow’s nest on the mainmast was the bowl. The body of the ship was full of water for cooling the smoke, and up on the bow stood the tiny ceramic figure of a boatswain with his pipe to his lips. A long hose was plugged into the ships stern, and there was a black rubber mouthpiece on the end. When you blew into the hose, the burning tobacco in the crow’s nest sent up a long column of smoke, and the boatswain went fweee! On his little pipe.”

Uncle Jonathan is a hookah- smoking warlock and Mrs. Zimmerman is a cigar – smoking witch who lives next door. Both adults sit up late at night with Jonathan and eat cookies and have hot cider parties. They relieve the tension with their humor; often addressing each other with childish endearments: Brush Mush, Hag Face, Frumpy, and Weird Beard are just a few. They’re the kind of irreverent adults most kids would love to live with. There is no ostentation associated with their magic; Jonathan refers to himself as a parlor magician, but can recreate historical battle scenes, and eclipse the moon. Even when Lewis awakens a devil worshipping- witch, the pair handles it gently; letting Lewis decide the best way to battle the witch:

Our game is wild swoops, sudden inexplicable discoveries, cloudy thinking. Knights’ jumps instead of files of rooks plowing across the board. So we’d better play our way if we expect to win.

This is a morbid book. It contains a Hand of Glory (the pickled hand of a hanged man that is supposed to be able to entrance humans), there are allusions to the Devil and the occult, the characters visit historical battle scenes, zombies knock on doors in the middle of the night, and there are séances. The dead are brought back to life. Characters die. Not good characters, but there is death in this short little novel. It’ll scare kids. But it’s also funny. The Edward Gorey illustrations are deliciously creepy.

I just hope the new movie lives up to the standards of the book.

Cate Blanchett as Mrs. Zimmerman is an interesting choice—she’s too Galadriel in my mind to play cigar- smoking Mrs. Zimmerman, but we’ll see. I think Jack Black is a good choice. It’s apparent that the movie will take liberties with the story, which won’t necessarily be a bad thing, but I hope the foundation and characters of Lewis, Jonathan, and Mrs. Zimmerman will stay true to the book.

a quick note on John Bellairs’ other books

John Bellairs wrote three separate series for kids that followed three different boys. Lewis Barnavelt (The House with a Clock in Its Walls), Johnny Dixon, and Anthony Monday. The Lewis Barnavelt and Johnny Dixon books feature young, male protagonists who are orphaned, or semi- orphaned (in Johnny’s case his mother is dead and his father is fighting in the Korean War), and have to overcome supernatural perils. Orphan boys discovering they’re wizards… hmmm, I feel like I’ve read something similar…

I’ve only read the Lewis Barnavelt series, but I’ve been told with authority that the Johnny Dixon books are better.

If you’re looking for more creepy book ideas for kids check out a previous article I wrote 9 Haunted Stories for Morbid Kids, or 28 of the Absolute Spookiest Scary Books for Kids and Teens.