We all love to make lists—from what we need “to do” to what we think of the world around us, it’s a nice device for encapsulating our collective knowledge and/or tastes on any of a wide range of subjects: “100 Most Popular Baby Names of the 1970s;” “Top 10 Blocking Tight Ends in the History of the Green Bay Packers;” “Best Pizza Places in Connecticut and/or Rhode Island, 2007.” The list—er, lists—go on. Nothing seems unlistable.

But, what about trying to capture the entire development of the English language—now peaking at some two billion speakers worldwide and a lexicon of more than a million words (including dialects and technical terms)? And what about doing so with a list of, say, fewer words than it’s taken to compose this post so far… 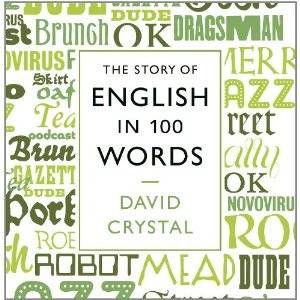 David Crystal, a North Wales-based linguist and scholar of the English language has taken it upon himself to pick out the hundred words that tell the story of the mother tongue since the Anglo-Saxons first arrived on the British Isles and started writing it down some 1,562 years ago. And while Americans love to make books full of lists, it seems somehow so much more British to take one list and expand it out into a book. Crystal’s The Story of English in 100 Words is really 100 chapters—one per word—covering more than 250 pages. But for a system of communication in its 16th and most prolific century as a written language, that’s pretty concise. (It won’t be available in the U.S. until 2012, but your favorite British bookseller or Amazon UK will be happy to “despatch” you a copy for a few quid.)

Crystal, who has written or edited nearly half a hundred books on the English language, took to the pages of The Telegraph this week to explain his process:

…it isn’t enough for each word to be interesting in its own right. It has to represent a whole class of words. It has to tell a story. And each of these individual stories should add up to the history of the English language as a whole.

When I embarked on this project, some words gave me no choice. They just had to be in – such as the earliest example of a written word in the language. Thanks to an exciting archaeological find, we know this to be roe. That starts the story. And the latest word to arrive? Well, as new words come into the language every day, all I could do here is choose an example which points to the future. I picked Twittersphere. That left 98 more to find.

But words are more than just linguistic objects. They are windows into the world of those who use them. Part of the challenge, then, is to find words that best give us a real insight into social history…

It’s worthwhile reading the whole article, if not the book itself (despite exchange rates, it’s still worth the extra sterling).

As you’ll see, Crystal takes on our language from its most basic elements: “Nor must we neglect the commonest everyday words,” he writes. “Word books traditionally focus on unusual and quirky items. They tend to ignore the words that provide the skeleton of the language, without which it would fall apart, such as ‘and’ and ‘what’…”

But he doesn’t shy away from the taboo, either (apparently, English-speaking vulgarians have been saying and writing “See(C) You(U) Next Tuesday” for some eight centuries), or the playfulness of the language; a fictional invention or play-on-words often just becomes the next word. And who said English was primarily the province of English majors: “three quarters [of all English words] belong to the various domains of science and technology.”

You can follow the link to the article (or buy the book) to see the full list, but here, as a taste, are some chosen highlights, with Crystal’s shorthand for their significance and the century in which they first appeared in writing:

Consider this a list of the “Top 35 Words Deemed Amusing Enough For a Blog Post About The Story of English in 100 Words.” Read the whole thing and let us know: What other words should have made the list?