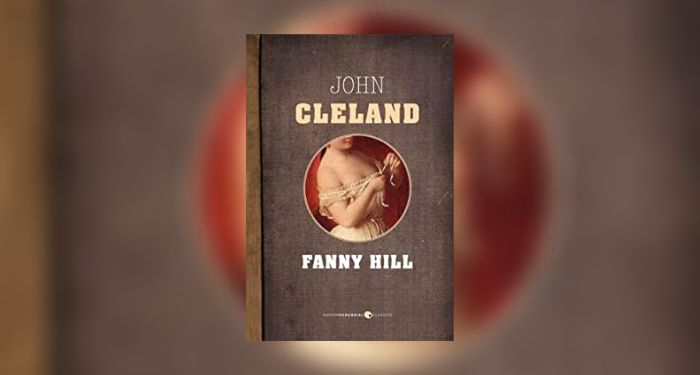 My introduction to Fanny Hill happened through a work of historical fiction by Elizabeth Gilbert named The Signature of All Things. It is a birth-to-death story of Alma Whitaker. Gilbert presents the enigma of life from botany to the human body, and folds in science, mysticism, spirituality, psychosexuality, all in one expansive package. A large part of this novel is Alma desiring sexual experimentation, but never acting upon it. What sets her on this discovery is a copy of Fanny Hill: Memoirs of a Woman of Pleasure she finds in an old closet. In many ways, Fanny Hill awakening Alma’s sexuality is symbolic of the novel’s place in history. It was and continues to be an important work in the literary canon, especially when it comes to paving the way for erotic writing to come.

Who was Fanny Hill?

Framed as two letters written by Frances “Fanny” Hill to an unnamed “Madam,” the novel recounts the fictional Fanny’s experience as a prostitute starting at age 15.
Fanny Hill: Memoirs of a Woman of Pleasure tells the story of an orphaned 15 year old with no skill and very little education named Fanny Hill. She leaves her village to find employment in London, where she is hired by Mrs. Brown. Fanny believed her employment was legitimate and that she would be working as a maid but she discovered that Mrs. Brown ran a brothel and intended to sell her maidenhead. The prostitute that shared her room opened Fanny’s innocent eyes to the sensuality of sex. Over time, Fanny Hill comes to develop an immense amount of pride in her occupation as she flourishes and learns.

John Cleland, a man who frequently indulged in gambling and womanizing, wrote the novel in debtors’ prison in 1748. Denied his mistresses, his imagination went into overdrive. In 1772, he told James Boswell, a renowned biographer who penned The Life of Samuel Johnson, that he had written Fanny Hill to show a friend of his that it was possible to write about prostitution without using any “vulgar” terms. To a large extent, he does.

There is a very limited range of sexual acts described and the most interesting moment is the narrator’s shock when a man and a woman actually undress, as most of the sex described involves euphemisms and loosening and tightening of clothes at strategic points.

Fanny Hill‘s fame does not come only from its groundbreaking subject matter for the time, but also for its continuous banning and stir it was able to cause with the American judiciary. It is one of the books to be so frequently banned that it has remained a centuries-long underground bestseller. Some 70 years later, illustrations from later reprints of the book led to one of the earliest obscenity cases in the United States. It was duly buried until the great Lady Chat liberation of 1960.

In 1959, persuaded by the Society of Authors, parliament passed a new Obscene Publications Act with the intention of protecting literature and tightening the criteria around what was considered pornography. Even though the act in itself proved unhelpful in initially getting books like Lady Chatterly’s Lover and Fanny Hill on shelves, it proposed an important change. It deemed that the obscenity of a work would not be judged solely on the basis of out of context passages that might seem obscene, but rather the book’s contribution as a whole for the people likely to read them. This was the first step that led to further formalization of laws around obscenity.

(a) Whether “the average person, applying contemporary community standards” would find that the work, taken as a whole, appeals to the prurient interest
(b) Whether the work depicts or describes, in a patently offensive way, sexual conduct specifically defined by the applicable state law
(c) Whether the work, taken as a whole, lacks serious literary, artistic, political, or scientific value.

The ban was lifted because Fanny Hill: Memoirs of a Woman of Pleasure was found to be of literary and artistic value. Fanny was defended as an “empiricist,” one who proves “extremely curious about life.” It is in satiating this curiosity that it was proven that Fanny Hill would continue to provide information about the 18th century and would continue to be an important historical work. Coincidentally, the lifting of the ban was also a time of sexual awakening in the 1970s America. Allowing Fanny Hill to take its place in the same literary historical moment as Samuel Richardson’s Clarissa (1747–1748), and Henry Fielding’s Tom Jones (1749).

To understand how the small changes to laws and perceptions led the way to Fanny Hill being widely distributed and published is to understand the significance of reading literature critically and leaving room for tolerance for where you find yourself in disagreement. As Geoffrey Robertson says in his piece on the Lady Chatterly trial, “The damage that gets attributed to books — and to plays and movies and cartoons — is caused by the actions of people who try to suppress them.”

Another reason why this remains a relevant work today is because of its story of inception: the journey from publishing to censorship, it is clear to see that these trends live on. A woman’s pleasure is largely ignored, and if it does make it to the market, is wildly censored.

Whether you choose to pick up Fanny Hill or not, it’s cultural value cannot be looked away from. If you are looking for more accounts of how other works have become parts of the literary canon, then head on over to Lady Chatterley’s Lover‘s history next.