I shouldn’t discuss Batman on social media. A few weeks ago, I remarked on a thread that the Batman vs. Superman movie irritated me. That was it. Of course two random Twitter users decided to argue with me and take me to task. They tried to explain the movie was good, and why. Now note, I didn’t say the movie was good or bad; I said it irritated me. The premise of Batman being willing to murder the American Boy Scout is irksome, but not loathsome.

You have the right to like Batman vs. Superman: Dawn of Justice. You have the right to like the Dark Age, Flashpoint, No Man’s Land, Son of the Bat, and A Death in the Family. By the same token, I have the right to dislike Batman Vs. Superman. I’m not saying your opinion is wrong, or that it makes you a bad person. This is why we have comics discussions, not to determine what is best or worst in comics, but rather to glean what appeals to us in the printed medium. Uncanny Magazine even recently published an insightful piece that questions if Batman is the hero, given what we see in any of the continuities.

Let me, however, make my case. The Batman whom Ben Affleck portrays is not my Batman. Nor should he be, in an ideal world. My Batman will stoop to violence, to occasional jerk moments, but he needs to have a heart under all that armor. If your Batman lacks that heart, then he has no place in my world.

Batman in the Golden Age changed constantly, because he was a character in flux. At one point he had actual wings. At another, he killed a few times before the editors put the kibosh on guns. Note that they didn’t stop him from using guns due to moral qualms. They realized that it didn’t fit the narrative. This decision paid off; in a memorable story where Batman confronts his parents’ killer; although the pragmatic choice would be to kill Joe Chill and avenge Thomas and Martha Wayne, Bruce decides that he would rather sacrifice his identity rather than commit murder. Chill dies in a random accident, but Bruce’s choice still matters.

When Golden Age Batman killed, he reacted to defend the innocent. He killed a vampire who tried to turn his fiancee Julie into a werewolf, for example, and who in turn was trying to kill him. Batman after this rarely used a gun, and in this case any jury would call this grounds of self defense. In other cases, he would only use lethal force on the obviously guilty.

Batman also retained his compassion. He adopts Dick Grayson when Tony Zucco orphans the latter, and has paid off the pre-Commissioner Gordon cops to silence any witnesses. In fact, Bruce saves Dick from going to those cops, and offers him a permanent home in Gotham. Dick takes to crime-fighting regularly, channeling his circus skills into saving lives. Dick also keeps Bruce grounded, by reminding him he’s an adoptive father. 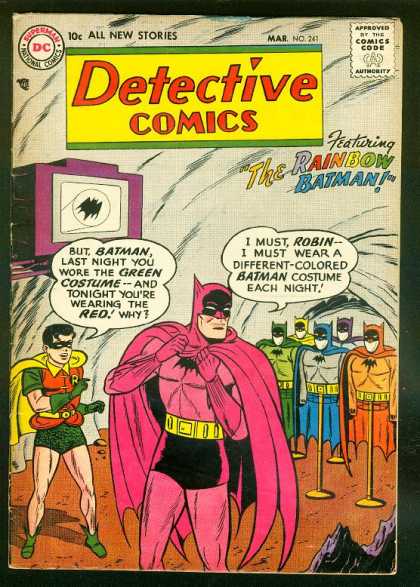 We can thank Frederick Wertham for the Silver Age. His nonfiction work, Seduction of the Innocent, criticized comics for creating juvenile delinquents. It’s no surprise that Wertham’s name became mud, especially when his book was published without sources. Regardless, Batman and Robin had to prove they weren’t engaged romantically (which, it’s obvious Bruce didn’t adopt Dick for that reason).

We also got the age of superdickery, or fakeouts where comics would display comics of heroes acting villainous. Even Batman had a few comic covers like this, say where he plans to drown Robin. You could tell the authors were doing what they could to fight the censors, the Comics Code Authority. They also had their share of fun. Superdickery.com has some of the best moments, if one can navigate the redesigned website. Batman was more than likely to smile than he was before. He and Robin would happily trade quips while throwing punches. They would indulge Alfred’s wishes while letting him join on occasional adventures. New sidekicks, like Bat Mite and Ace the Bathound, would make their debuts. Batman’s Rogues gallery became wackier, as did the multiple death traps. The Joker tried to add more jokes to his schemes, and resort to less murder. One can see the contrast between this Joker and Mr. J’s Golden Age self, where he killed three public officials just because he could.

Bruce remains compassionate. Dick is still his adoptive son, as the Boy Wonder grows up and still quips terrible puns. While he finds himself annoyed with his token love interest, Kathy Kane, he still engages in as many healthy platonic relationships as possible. Robin fended off Kathy’s niece Bette, who would don the cowl to win him over, but he remained as polite to her as possible.

Dick would then join the Teen Titans, who also were part of the campiness. These teen sidekicks would come together for their own thing, and Two-Face’s daughter Duela would also join calling herself the Harlequin. Bruce accepted this turn of events with pride. Bruce returned to his dark roots, after readers make it clear that the campy side would wear thin. Julius Schwartz took over the title and discussed how Batman being married to the job had consequences, and that he was getting old. In a parallel universe that homages the Golden Age, he married the former Catwoman Selina Kyle and started a family with her. Helena Wayne, Bruce’s daughter, becomes the Huntress, and honors her parents’ legacy. When she visits the main canon world, she calls her parallel father “Uncle Bruce” and wants him to never despair.

Again, balance is key. It would have been too easy for Julius Schwartz to sink into the later Dark Age, and to make Bruce’s story ultimately depressing. But his writers knew where to add Bruce’s compassion. Bruce saves one of Joker’s henchmen from drowning in a shark tank, as one example. He also protects his Robins when Dr. Hugo Strange comes calling.

The Bat Family continues to grow. Dick grows up, but he and Bruce can still banter. Bruce happily ponders that Dick would spend time with a lady, while Dick teases Bruce about his newest girlfriend. The two are partners, and family; that family only grows when Dick decides to adopt a fellow circus brat, Jason Todd the strawberry blonde, who loses his parents to Killer Croc. Dick eventually decides he’s grown out of the Robin role and changes into Nightwing. Jason dyes his hair and becomes Bruce’s new sidekick. Bruce makes it a point to protect his new adopted son. He remained a goofball while pleasing his adoptive father.

The Dark Knight Returns, Batman and the Dark Age 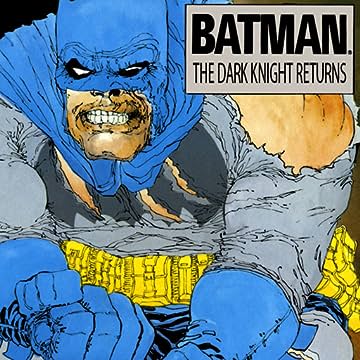 I can’t comment on  Frank Miller’s later works. I’ve only read The Dark Knight and feel that it strikes the balance between hope and despair that later works missed. With that said, I wish that writers had tried to balance the Dark Age’s grittier elements with its heart.

In Dark Knight Returns, Bruce has retired because he has gotten old, and Jason died in battle. This was before Jim Starlin thought it was a good idea to turn the sweet goofball Jason into the Joker’s crowbar target. (Jim Starlin, I will hold this forever against you.) Batman returns because the city still needs him, with Two Face’s threatening reappearance.

This would still be a dark story. But then Carrie Kelly arrives on the scene. A perky, redheaded teenager whom Bruce saves from muggers, Carrie gets inspired and makes her Robin costume. She helps Bruce fight Two Face, and sets his broken arm. Batman starts to regain the will to fight, and to not die trying. He teaches Carrie how to drive the tank, and how to act as a disguise. She spots clues, and keeps him grounded.

It’s all right for Batman to use a gun in Dark Knight Returns. He learns the hard way that getting old means he can’t just beat his way out of problems. While he is willing to unleash a beatdown on Joker, he has to still face the consequences. Joker uses this to his advantage, killing himself after Bruce paralyzes him. Breaking Batman’s code has a price, and it shows. Bruce only gets more freedom by faking his death, while Superman begs for him to stand down. The Boy Scout has become a government employee, but he fights to save his world, and to keep his friend from dying. When Superman realizes that he didn’t fail, he lets the matter go.

Next post I will discuss post-Frank Miller Batman, and the modern age.In the meantime, please remember that everyone has the right to their opinions, and to never discuss Batman on Twitter.