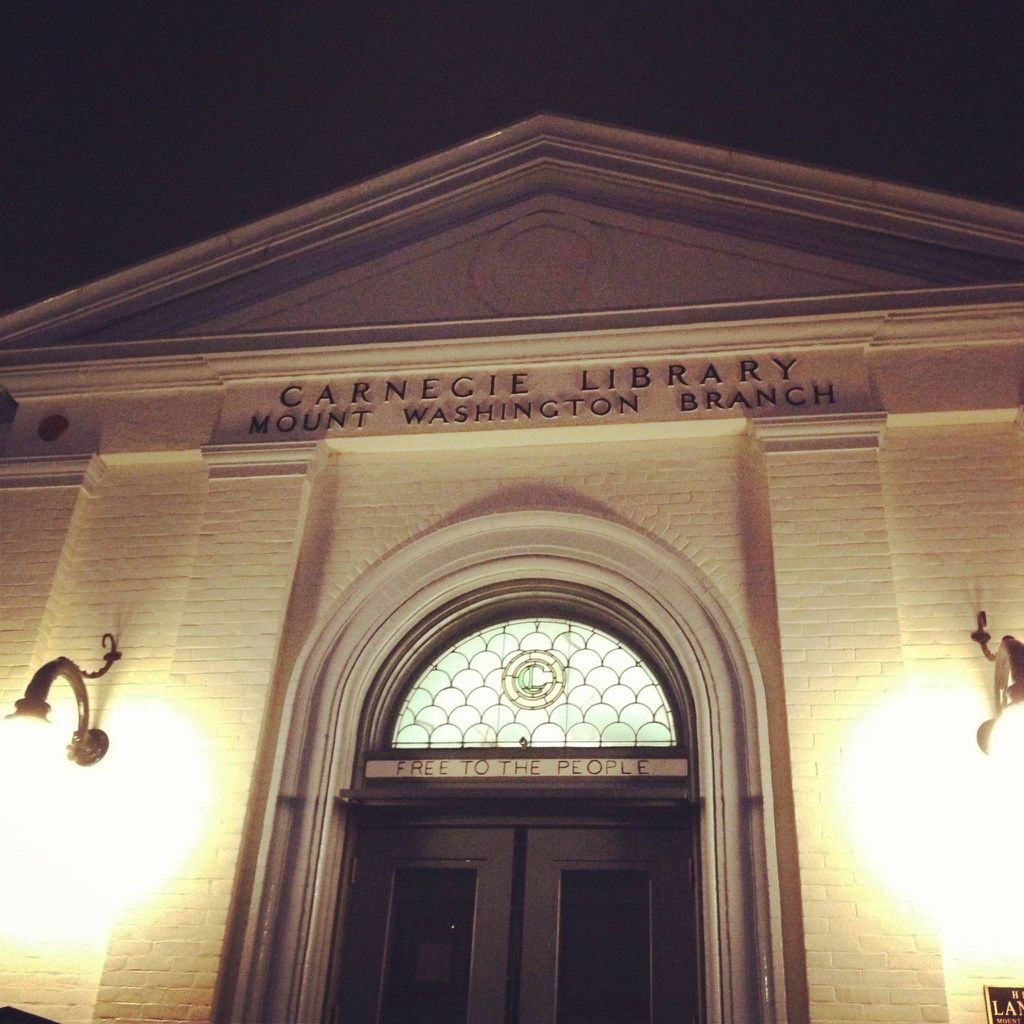 On Saturday night, I braved the cool temperatures and the somewhat slushy rain for the Haunted Pittsburgh Incline Ghost Tour. The tour meets at the bottom of Mount Washington, and the group travels to the top via the Monongahela Incline railroad, one of only two of the original 17 funiculars that carried miners and mill workers from the bottom of the mountain to the top at the turn of the 20th century. I knew that the tour stopped outside the Mount Washington branch of the Carnegie Library, but I didn’t realize is that it is not the only library in the city that has a story attached to it. Here are a few of those stories, courtesy of my tour guide, Rachel. 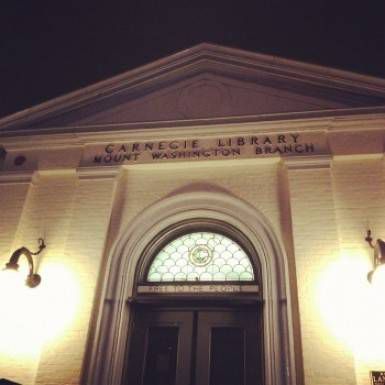 This library opened its doors in the summer of 1900. Physically, little has changed. The circulation desk is the same one that patrons saw when they walked in the doors on opening day. The creaks, groans, and wheezes that are heard are typical for a building that is more than 110 years old, but there is something more. It is not unusual for the librarians to feel as sense of dread when they are the last one out for the night. There are no dark tales in this particular library’s past, though – not that anyone knows of.  In an effort to explain these uneasy feelings, the Haunted Pittsburgh folks asked a local medium to visit and get to know any other-wordly inhabitants. On just the first floor, she identified 7 spirits. All of them are locals who enjoyed the library in life and have found it a pleasant place to pass the time now that they are dead. One spirit is especially active. Her name is Clara, and she likes to help patrons find the titles that they are looking for. Sometimes, she even gently guides patrons to titles that she thinks they will enjoy.

This is one of the most haunted libraries in Pittsburgh. Oakland is the main branch of the city’s library system, and it opened in 1895.  Within just a few short years, the library had its share of ghosts attached to it, and they continue to remind both library workers and patrons of their presence. The stories range from the strange but relatively innocent, to the somewhat  disturbing. We’ll start with the annoying end of the spectrum.

When the librarians leave at night, all the books are shelved in their proper places. When they return in the morning, however, it is not uncommon for all the books from a particular section to be piled in front of the circulation desk. They have never been able to figure out how it happens or who (or what) is doing it. It’s a mystery fitting for the books that find their way to the floor – all from the mystery section.

Other mysteries in this branch are easier to explain, even if the explanation gives you chills. For example, there was a worker in the basement who saw a man standing next to an electrical box. The worker went to approach this oddly-attired man, but before he made it to him, he had disappeared, presumably around the corner. This part of the library is off limits to patrons, so the worker felt he should report the man to the librarian on duty. Here is their exchange:

“What are you talking about?” the man said.

“Who told you to come in here and ask me about him?  Whoever it was should have also told you that subject is off limits in this office.”

The man swore that no one put him up to anything. And the head librarian realized he was serious.  Her face grew solemn and she got up and closed the door. She sat back down, looked down at her desk for a moment, then she lowered her voice to a whisper.  “Several others have seen him, too. And they’re scared.”

The man said, “Why doesn’t someone tell him the basement is off limits to patrons?”

“Because,” the librarian said, “he’s not a patron.  He thinks he still works here. You see, the workman you saw in the basement was electrocuted while he was installing the electrical box the day the Carnegie Library got electricity.”

The final story is the more disturbing one, at least for me. There was a judge that was known to be a regular patron of this library.  Though the reasons have been forgotten, he chose to hang himself in the stacks. Before he died, he left a note scrawled on the wall.  Even though the scene was cleared and the wall cleaned before the library was reopened to patrons, it is not unusual for the library staff to find the same message on the wall in or near that location. The really odd thing? It isn’t always written in English, but it always says “The judge is here.”

The site of this library had spirits attached to it even before the library was built. The site was once a cemetery. In 1879, the City of Pittsburgh set aside that land for a new school. Before they began building, the families of the people buried there were supposedly contacted and asked to move their loved ones’ remains to a new location. Only 70 of the 450 bodies were claimed. When they broke ground, they discovered that there were still hundreds of coffins and tombstones, which was more than a little bothersome to construction workers. The city responded by relocating the remaining bodies to a mass grave. They built the school – and a library – right next to it. It makes sense, then, that these spirits are more than a little restless. Janitors are afraid to work there at night, and library patrons have reported seeing the spirit of a little boy wondering the halls in the evening. He is reported to have a mischievous nature, pinching patrons on the arms and otherwise disturbing their reading.   It is widely accepted that it is the spirit of the little boy whose tombstone is on display in the library – “In Memory of Henry Snowden who departed December 7th, 1830.”

As evidenced by this list, Pittsburgh is not the only city with haunted libraries. Do you have a scary library story? Share in the comments below!