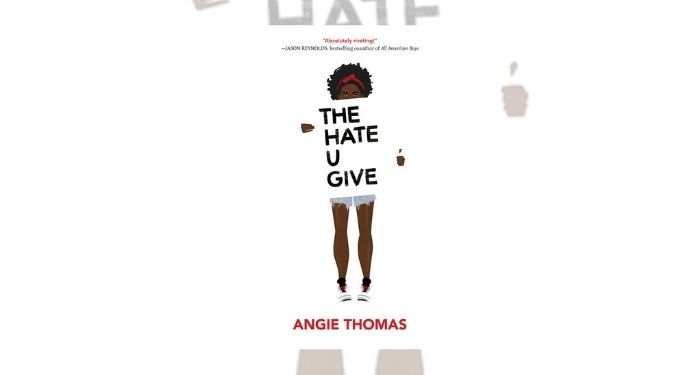 In most parts of the US, if public schools aren’t back in session, they will be soon. If fights about masking or not masking during a global pandemic and rise of the COVID-Delta variant weren’t enough, nor were protests against access to inclusive sexual education material, now teachers and librarians have to fight a third front. Opponents to Critical Race Theory (CRT) are flooding school and library board meetings, hoping to squash use of titles that explore anti-racism. Angie Thomas’s award-winning debut The Hate U Give is one such title under the spotlight by anti-anti-racism activists in Putnam County, New York.

The book is on a ninth grade reading list for the school.

“This is what they are “ suggesting “ your child read !! Are you going to allow them to teach your kids to hate our police , is this what you really support??! I need you all of you any of you to get up make those calls , write those emails demand these books be pulled , you are paying for these books your child is being abused by an organization who wants to control your children!!!! It also entices violence and murderer citizens and our police,” reads a Facebook post from local anti-anti-racism advocate Tatiana Ibrahim (a pseudonym for Tanya Brahimi). Ibrahim encourages her followers, many of whom began following her after she gained national attention for a speech to the school board decrying CRT, to speak up and demand the book be pulled from the list.

Those who saw, shared, and responded to Ibrahim’s post about The Hate U Give noted other schools where the book was on reading lists and said they wished that the attention being given in Putnam County would reach a wider level.

“I’ll be honest they are coming out and fighting my county alone a county that has been silent for a long time is not taking this crap anymore. Putnam county is taking its schools back . I’m so honored to be part of a strong courageous county of Patriots,” responded Ibrahim in the comments.

Ibrahim has garnered attention not only for her work in speaking out against CRT, but also in support of “Blue Lives Matter.” She’s helped other parents bring material to the attention of their school boards and wider communities in order to further her anti-anti-racism messages. Diversity, inclusion, and equity in education have been subjects of her protest, including recently at Yorktown.

The Hate U Give is no stranger to criticism, having been on the American Library Association’s most challenged list since its publication in 2017. Reasons for its continual challenge include it being “‘pervasively vulgar’ and because of drug use, profanity, and offensive language.”

Anti-CRT advocates have taken this moment to push their agendas by now targeting individual books like Thomas’, adding a whole new series of reasons why the book is inappropriate for high school students. For Ibrahim and those working with or near her, anti-police messaging and “hate speech toward AA” are reason enough.

“Absolutely disgusting that the BOE would subject and pervert our children with such offensive reading. Truly a sin!,” wrote one commenter, while another noted, “Pull your kids, no kids, no money. The only understand $$. I would never allow my kid to be exploited this way.”

One commenter laid out a slick plan for pushing back against these “new” standards, begging locals to attend meetings. “Don’t expect your neighbors to stand up and fight if you don’t…the Warped term to be used under this initiative is..”Unconscious Bias”…Really?…look it up neighbors..,” he wrote, adding, “It’s urgent and extremely important and I dare say, most parents don’t know this…but Facebook did…a d the Facebook censors did prevented me from posting the “Public” weblink to the NYS Department of Education site that shows and lists the names an members of the State Regents…What gives that selected group the right to impose their initiative on all the school districts?…but this has happened before with Common Core methodology and other State Regents mandates..”

What’s important here, though, is that that those who are proponents of access to information, as well as books like The Hate U Give, diversity and equity educational initiatives, and CRT in the classroom can use these same plans stand up for this work. Certainly, Facebook’s decision to censor a link is a real hurdle in the anti-anti-racism fight, but for those who want to encourage continued use of books like Thomas’, the link to the New York state department of education is here, with contacts listed here.

For those in New York, reach out to the Regents and encourage them to continue their work in diversity, equity, and inclusivity for state-wide curricula. Stand up and speak out at meetings happening locally, to lend your voice in opposition to those organizing and encouraging a white-washed education.

One thing this group has right is parents need to be involved. But they need to be involved by considering the needs of every student served by public schools (and libraries), not just the ones from conservative, often white, parents.

Besides, what’s so scary about learning about racism? As one commenter on the local Patch article wrote, “Politically correct, conservative parents who are afraid that books “contain divisive topics” are activists for regression.”

Get on your phones, get into the rooms where the meetings are happening, and ensure that a small group of loud, agenda-driven community members don’t have the capability of dictating what the standards of information should be. Additional ways to be involved, whether in schools or libraries, the tools here can help.

*all quotes are reproduced as written