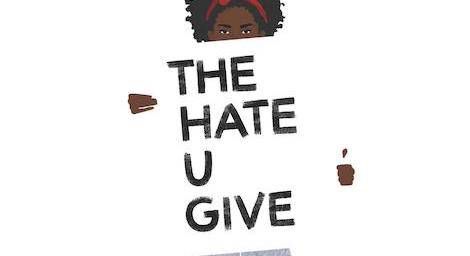 Angie Thomas is having quite the year. Her debut novel The Hate U Give debuted to widespread critical acclaim. It nabbed the number one spot on the New York Times list for young adult best-sellers and has enjoyed a comfortable 38 week stay on that list to date. It made the longlist for the National Book Award for young people’s literature and was the Boston Globe-Horn Book Award winner for fiction. It’s even been optioned for film adaptation. In rather less exciting news, The Hate U Give has been banned from the Katy Independent School District in Texas.

The Hate U Give – often shortened to THUG, is the story of Starr Carter, a black teenager finding her way in two very distinct worlds: the streets of the poverty-stricken neighborhood she lives in and the halls of the suburban prep school in the “good” part of town that she attends. One night, her life changes irrevocably. A white police officer shoots and kills her best friend Khalil and Starr is the sole witness to the shooting. Khalil’s killing quickly becomes a national headline; some call Khalil’s character into question while others protest in his name. Starr struggles to find the bravery to bring truth to light while also trying to protect her life and those of the people she loves. The book was clearly inspired by the Black Lives Matter movement, tackling issues of racism and police brutality head-on.

Thomas shared the news about The Hate U Give banned on Twitter:

I'm saddened to hear that a school district in Texas banned #TheHateUGive, but I'm also empowered – you're basically telling the kids of the Garden Heights of the world that their stories shouldn't be told. Well, I'm going to tell them even louder. Thanks for igniting the fire.

A deluge of support poured in from fans and supporters of her work on Twitter. Teachers in the district pledged to read and recommend the book. Author Ali Benjamin then offered to purchase copies of it for any of those teachers to give to their students anonymously. A young woman by the name of Abby Berner tweeted a call to action, urging others to contact the district office in complaint. She claims Superintendent Lance Hindt banned the book unilaterally without conducting the normal review process, and that he did so in response to complaints from parents about the book’s use of “inappropriate language.”

The book does indeed contain its fair share of curse words; THUG’s foul language runs the gamut from the usual four letter expletives to the use of the N word. Thomas acknowledges her use of this language and understands why educators might take issue with it, according to tweets that followed her original announcement of the ban. She does however implore those educators to look past the language and focus on its message.

Critics of the ban suggest that the language is hardly the problem. Commonly taught classics like Catcher in the Rye and Adventures of Huckleberry Finn are after all rife with curse words. Some suggested the “presumptive normalization of sexual activity” was what bothered them about the book. There are however very few references to sex in THUG. One involves a scene between Starr and her boyfriend – one where Starr decides she isn’t ready. In the other, Starr’s parents leave the room to, as Thomas puts it, do “what married people do.”

A quick scroll of related tweets suggests it is the book’s thematically uncomfortable material that led to the ban. In other words, racism and police violence. Several readers have called upon the Office for Intellectual Freedom of the American Library Association (ALA OIF) to intercede; others have reached out to the superintendent directly demanding that usual review process take place.

While saddened to learn of the ban, Thomas shows no signs of discouragement. “I’m not bothered,” she states.

As of now, neither Superintendent Hindt nor the ALA OIF have commented publicly in response.

Check out all of our coverage on The Hate U Give and its upcoming movie here.