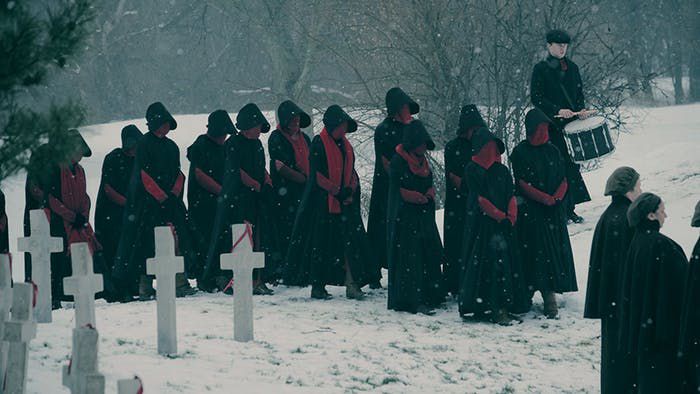 In six days it will be the one year anniversary of the Women’s March. If you want to keep up the rebellious spirit of the past year, Margaret Atwood’s The Handmaid’s Tale is a fantastic place to start. You should also check out the television adaptation on Hulu. There’s good news for fans of the series, too: In 100 days season 2 of The Handmaid’s Tale will debut on April 25, 2018. Hulu released the new trailer yesterday and it looks like we’re in for a fiery new season.

Everyone is being super secretive and tease-y about season 2, but Margaret Atwood is said to be stepping up her personal involvement in the project. Whether this means a Stan Lee-esque cameo or not will have to wait to be seen. Show-runner Brian Miller has declared that Elizabeth Moss’ Offred will continue to be the series’ primary focus, but we do know we’ll be seeing more of Alexis Bledel’s Ofsteven and Samira Wiley’s Moira. We’ll also be seeing Marisa Tomei in an as yet undisclosed role. Perhaps as Aunt Lydia, whom Miller has teased a possible introduction of this coming season? The plan seems to be to continue following and expanding upon the book with some changes similar in scale to the book-to-screen changes seen in season one.

Check out the new trailer for The Handmaid’s Tale season 2 and tell us what you think.