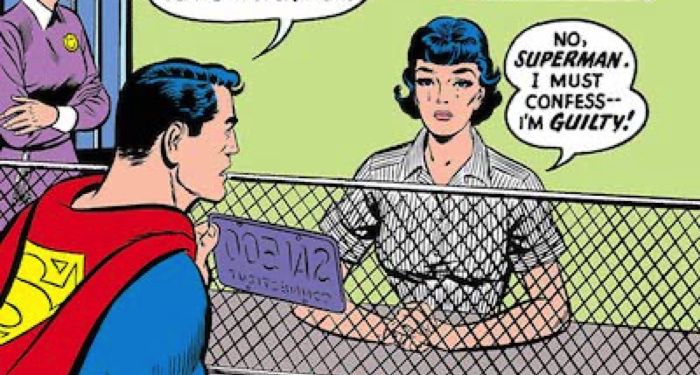 Superman’s Girl Friend, Lois Lane is a legend in the annals of comic books. This awkwardly named series ran for 137 issues from 1958 to 1974, making it one of the longest running female-led comics of all time outside of Wonder Woman and Betty and Veronica. At one point it was the third best selling book on the stands, after Superman and Superboy. It’s a classic.

It’s also…uh, let’s say a problematic fave? Like its brother title, Superman’s Pal, Jimmy Olsen, SGFLL is infamous for its bizarre, convoluted plot lines, which frequently involved Superman acting seemingly out of character, often for the ultimate purpose of teaching Jimmy or Lois not to be so impulsive//curious/young/female/[enter the supposed personality flaw of the week here]. This is weird and upsetting enough with Jimmy, but with Lois there’s a whole extra level of, well, Superman repeatedly deceiving and gaslighting a woman he’s romantically involved with, who is also his coworker. Lois spends a lot of Superman’s Girl Friend, Lois Lane in tears.

I was familiar with this formula, which is why I was so surprised and delighted to encounter the glory that is “The Amazing Superman Junior,” the first of three stories in Superman’s Girl Friend, Lois Lane #6 (January 1959), because Superman attempts to pull his usual shtick on Lois—and she is completely and totally not having it. And it’s amazing. 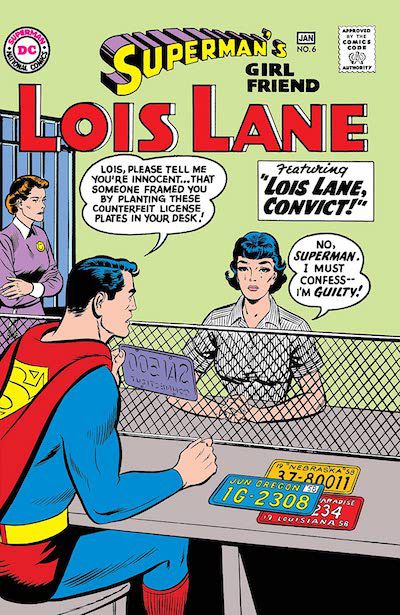 First of all, how incredible is that cover? It has nothing to do with the story we’re discussing, but I love it. Oh Silver Age Superman, never change.

Our story begins with Lois covering the launch of a new rocket. Determined to be the first civilian aboard and thus get a scoop, she feigns sunstroke and asks to be carried inside. Once alone in the rocket, she accidentally triggers a launch, which is definitely very easy to do with rockets.

Any girl who ever used “female troubles” to make a male gym teacher panic and let them skip class can relate to Lois’s incredible over-acting in the first panel.

Luckily, Superman happens to notice the rocket taking off ahead of schedule, stops it, and rescues Lois, who has fainted from shock. Furious because she…tried to get a scoop…because she’s a reporter…like he is…okay, whatever, he decides to “teach her a lesson,” because that’s an appropriate way to interact with one’s fellow adults.

WHY DOES THE WHOLE PAPER GET THE WEEK OFF FOR THIS. Perry slouching in his chair there has never looked more deserving of a harassment suit.

Batman is too busy doing *checks notes* literally anything else to participate in this communal punishment, but Robin and his gams are all in: 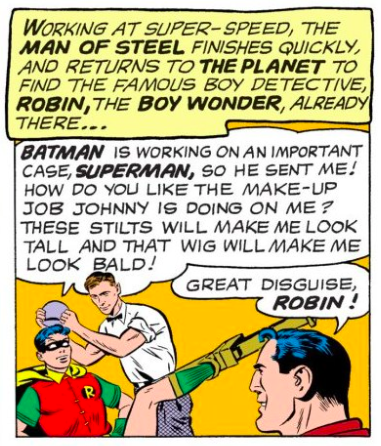 I can’t stop laughing at this panel but it also makes me extremely uncomfortable.

When Lois wakes up, Superman has brought the rocket to an uninhabited island upon which he has built a fake futuristic city. Waiting to greet her are Superman, Perry, and Jimmy, who claim to have aged 50 years because something something relativity. (Also: Perry and Jimmy, who are at least 30 years apart in age, are somehow now equally old. Relativity again, probably.)

Where are her good friends Clark (who can’t appear for obvious reasons) and Batman? Oh, they’re dead. Take that, Lois! And what’s up with Robin, 50 years later? 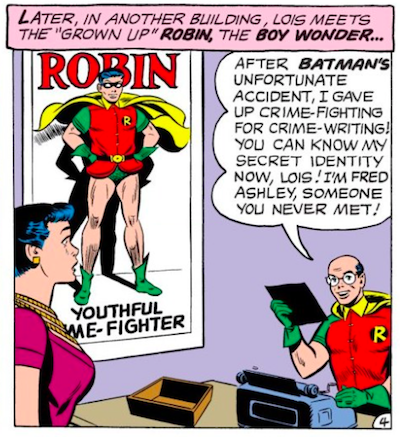 STILL WEARING THE SHORT PANTS COSTUME, JUST BALD. (And apparently on stilts.) Take that, The Dark Knight Returns and Kingdom Come! This is the real future of the DCU: male pattern baldness.

Lois, having spent the past several pages sobbing while all of her male friends (ha ha just kidding she’s not allowed to have female friends) snicker behind her back, asks to go back to the rocket to touch up her makeup. As you’ll note, she’s particularly devastated by Superman’s passing comment that he married and had a child with another woman.

But wait, what’s this?

(Please also note that these sociopaths let this prank go on for more than a day.)

“Superman Junior” immediately starts putting the moves on Lois, who very clearly doesn’t mind. Fake Old Superman, meanwhile, is baffled. He’s…pretty sure he doesn’t really have a son? But this newcomer demonstrates all the typical Kryptonian powers on command:

Lois and Superman Junior have a whirlwind and extremely hilarious courtship:

I was going to make fun of that enormous cake but no, I would marry any man who brought me a cake that big, that’s legit.

Fake Old Superman has gone from confused to furious. This is insulting! Spending 48 hours conspiring with dozens of people to convince the woman you love that she’s been lost in space for half a century and all of her friends are dead or elderly is just good clean fun, but this is a bridge too far! This is a prank being played on a man!

Suddenly, Fake Old Superman realizes who this imposter must be, and uses his heat vision to prove it: 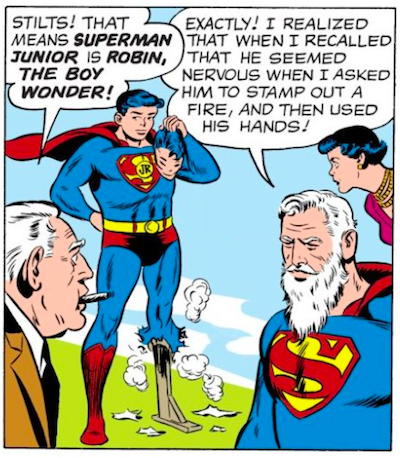 It’s Robin! He put out the fire earlier with his hands rather than stamping it out as Superman requested, because he was afraid his wooden stilts would burn. The rest of him is temporarily invulnerable thanks to a Super-serum that he happened to have in the Batcave (you know, like you do) which Lois made him drink.

But why did Lois make him hoax Superman, and why did he go along with it?

I love that there’s literally no reason “adult” Robin should be sitting at a desk, in a child’s costume, typing…something? but he’s doing it anyway, because I guess stopping criminals and saving lives is less satisfying that keyboard smashing bullshit on random pieces of carbon paper.

Good thing Lois always carries a ludicrously enormous piece of paper in her purse! (Oh my god you guys, Ernie Chandler is Robin!!!)

Anyway, that’s how Lois figured out that she was being pranked and turned the tables beautifully on her tormentors. (Note that Lois didn’t tell anyone their loved ones were dead or make them cry.) This is some of the most satisfying vengeance I’ve ever read and I’ve read like 300 issues of The Punisher.

And it gets better!

“Lois, I can’t believe you blackmailed a child.” Hush, Clark. You’re the one who dragged Robin into these psychosexual mind games in the first place, not Lois. Why don’t you listen to her and do something good for the world instead of figuring out new ways to manipulate your friends?

And no, Perry. No one will ever teach her a lesson, because she’s smarter and better than all of you. Now print that story on page one (above the fold, thank you) and make sure to clap when she wins her multiple Pulitzers.

By the way, the other two stories in this issue are: 1. Lois gets arrested for taking a bribe not to expose a counterfeit license plate printing gang, only to reveal that her arrest was part of an elaborate sting to take the gang down, and 2. Lois becomes a lieutenant in the army (…sure) and turns out to be a tyrant and a bully, only to reveal that her seemingly cruel behavior was designed to ferret out a foreign spy. It’s a pretty great comic book.

Superman’s Girl Friend, Lois Lane is overall an entertaining but somewhat troubling book. But every so often gems like #6 pop up and show us why this character has endured for over 80 years. Here’s to you, Lois Lane!