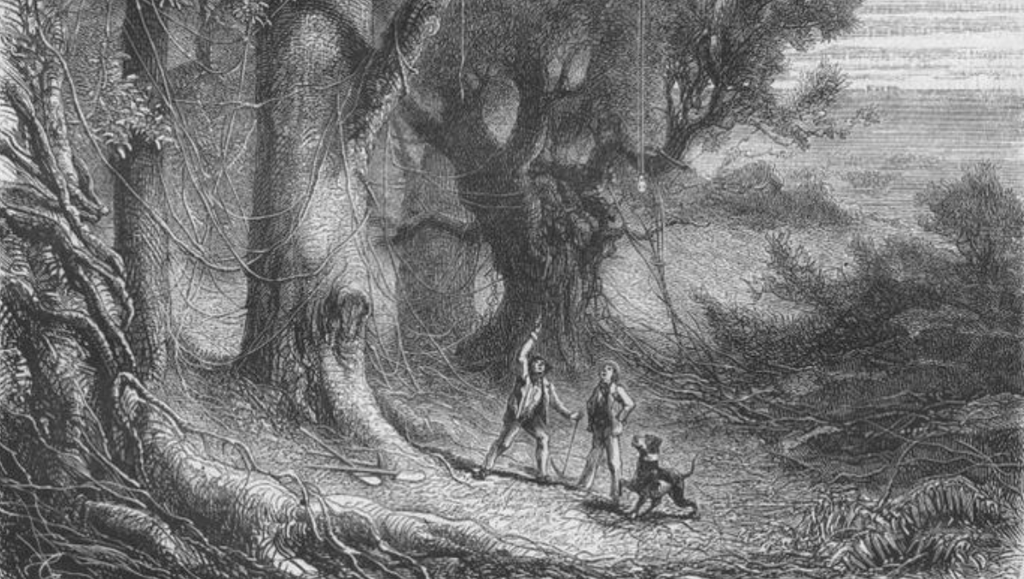 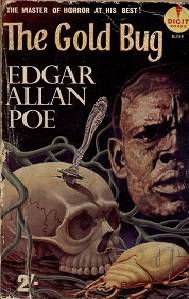 For modern readers, Edgar Allan Poe is synonymous with Gothic tales of horror and “dark” poetry, like The Raven or The Tell-Tale Heart. But during his lifetime, that wasn’t the case. Instead, by far his most successful and famous story was one little-known today: The Gold-Bug.

In The Gold-Bug, our unnamed narrator meets with an old acquaintance, William Legrand, who lives on an island near Charleston, South Carolina. Legrand is in “one of his fits…of enthusiasm,” having just discovered what he believes is a unknown species of beetle. So imagine how excited he gets when he realizes that, in collecting the bug, his black servant Jupiter accidentally grabbed a scrap of paper with a code revealing the location of Captain Kidd’s lost treasure. 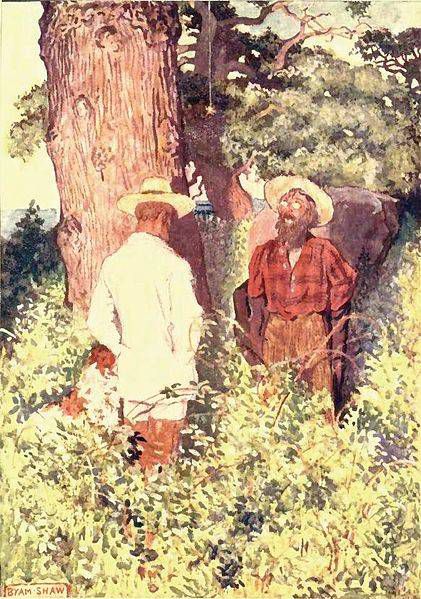 “The beetle, which he had suffered to descend, was now visible at the end of the string.” Byam Shaw, 1909.

The Gold-Bug was the first work of fiction to incorporate cryptography into the plot. In fact, the very word cryptograph was invented by Poe and used for the first time in this story. It inspired future cryptologists for generations to come (including William F. Friedman, an American famous in cryptographic circles for breaking Japan’s PURPLE code in WWII), and dozens of writers all over the world. Think Robert Louis Stevenson’s Treasure Island, Jun’ichirō Tanizaki’s Devils in Daylight, or The Gold Bug Variations by Richard Powers. It’s entirely plausible that the science of cryptanalysis as we know it today wouldn’t exist without The Gold-Bug. 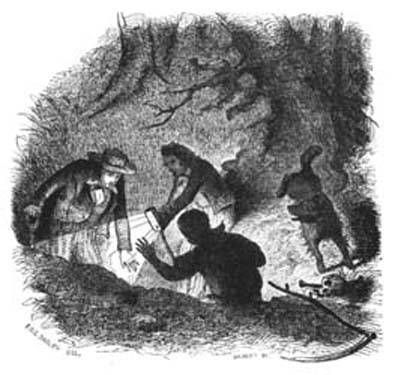 Before Poe, cryptography was a complete mystery to most people. Simple substitution ciphers like the one in The Gold-Bug were considered unbreakable unless you possessed the key to decode them. But Poe’s knowledge of language and obsession with logic, or “ratiocination,” made him realize that any code could be broken. And he showed people exactly how to do it.

In 1839, four years before the publication of The Gold-Bug, Poe published an article in Alexander’s Weekly Messenger where he challenged the readers to send him coded messages, stating,

It would be by no means a labor lost to show how great a degree of rigid method enters into enigma-guessing. This may sound oddly; but it is not more strange than the well know fact that rules really exist, by means of which it is easy to decipher any species of hieroglyphical writing—that is to say writing where, in place of alphabetical letters, any kind of marks are made use of at random. For example, in place of A put % or any other arbitrary character—in place of B, a *, etc., etc. Let an entire alphabet be made in this manner, and then let this alphabet be used in any piece of writing.

Poe knew that the frequency of letters in the messages would be the key to breaking the codes. This is a pretty basic code breaking technique by modern standards, but at the time was groundbreaking. Poe’s cipher challenge became a huge hit: he received hundreds of coded messages from all over the country, and indeed solved them all except for one that, “we fully proved…a jargon of random characters, having no meaning whatsoever.”* 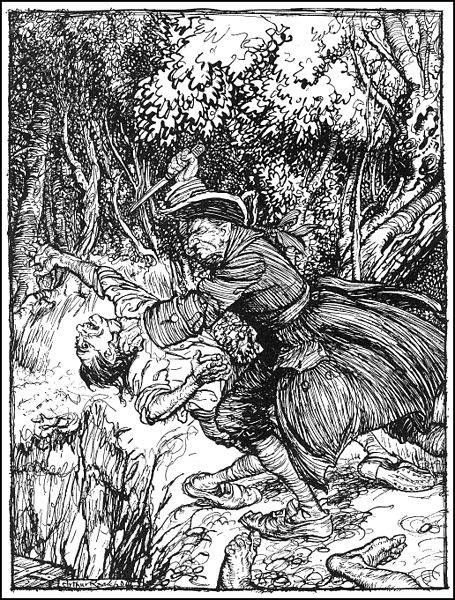 Captain Kidd hiding his treasure. From Poe’s Tales of Mystery and Imagination. Illustrated by Arthur Rackham, 1935.

Realizing the public’s fascination with code breaking, Poe decided to write a story specifically for his cipher-fanatic audience. Throw in buried treasure, an exotic “very singular” island, mystery, madness, and—a must in any good treasure hunting tale—the spectre of death, and you have an intense tale of adventure that captured people’s imagination and made Poe a household name.

The story won a $100 grand prize—the most Poe was ever paid for a single piece of writing during his lifetime—and publication in the Dollar Newspaper, becoming an instant success. It was The Gold-Bug—not The Raven or The Tell-Tale Heart—that drew standing room-only crowds to Poe’s lectures and established his international fan base in countries as far flung as France, Russia, and Japan. 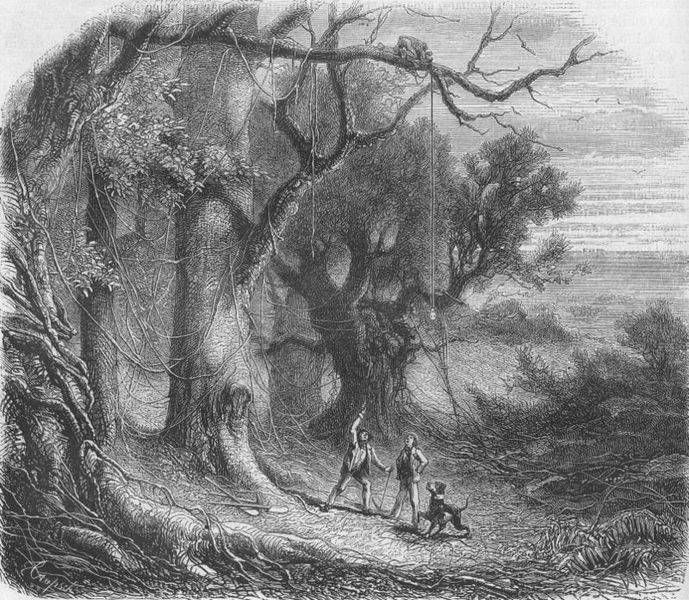 So if The Gold-Bug is so awesome, why isn’t it more widely read today? The answer is two-fold. One, the code used in the story is pretty simple. What was new and exciting in 1843 is something gradeschoolers are taught today, which takes a lot of the wow factor out of the story for adults. It’s still a fun story, just probably not something you’d get into unless you were a kid.

Secondly, there’s Poe’s treatment of Jupiter, which is problematic to say the least. Jupiter is a former slave who refused to abandon Legrand even after he was freed. Poe probably intended Jupiter to serve as comic relief, but in reality his portrayal of the character is ridiculously stereotyped. And that’s a shame because Jupiter is the only sympathetic character in the entire story.

In particular, Jupiter’s dialect is head-scratchingly strange and hackneyed. Take this exchange between Jupiter and the narrator, for example:

“Well, Jup,” said I, “what is the matter now?—how is your master?”
“Why, to speak de troof, massa, him not so berry well as mought be.”
“Not well! I am truly sorry to hear it. What does he complain of?”
“Dar! dat’s it!—him neber plain ob notin—but him berry sick for all dat.”
“Very sick, Jupiter!—why didn’t you say so at once? Is he confined to bed?”
“No, dat he aint!—he aint find nowhar—dat’s just whar de shoe pinch—my mind is got to be berry hebby bout poor Massa Will.”

This is obviously nothing like how slaves (or anyone, for that matter) talked. It’s just a dialect that Poe made up, which in itself is a mystery. Poe spent plenty of time in the south during his military career, and grew up only a few blocks away from a slave market in Richmond, Virginia. It’s hard to believe he would have never spoken to a black person. Why wouldn’t he simply draw from what he knew instead of inventing a strange new dialect? 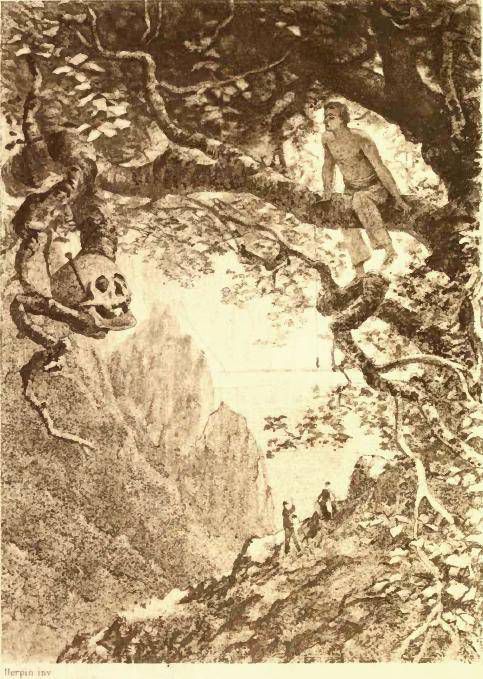 Illustration by “Herpin” for a 1895 edition of Poe’s The Tales and Poems.

Of course, the obvious answer is that he was racist and didn’t GAF if Jupiter’s dialect was accurate or not as long as he “sounded black.” But perhaps Jupiter’s odd way of speaking might be a code within a code. Poe was known to hide messages into seemingly ordinary poems and stories, a special type of cryptography called steganography. The problem with steganography is that, once the rules of the secret message are set, you have to write around it, which could explain the odd spelling and format of Jupiter’s dialog. Some have speculated that Poe’s more oddly worded and organized works—like Eureka, his weird poetical essay on cosmology where he basically came up with the idea of the Big Bang—contain codes that have yet to be uncovered.

The idea that Jupiter might be speaking in code doesn’t negate Poe’s treatment of the character, and it might not even be true. But it does show what kind of story The Gold-Bug is, and why it inspired so many people both artistically and scientifically. On the surface it’s a riddle within a riddle: The riddle of what’s wrong with Legrand while he solves the riddle of Captain Kidd’s treasure. But the riddle never feels fully revealed. There’s always a sense that there’s more to the story—an obsession not fully quenched, or only just begun to foster. In The Gold-Bug, as in so many of Poe’s stories, one’s left feeling it only scratches the surface of what the man himself knew. 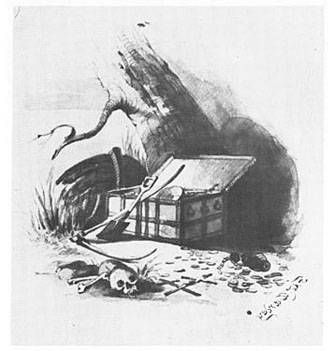 *There are actually two exceptions, but that’s too complicated to go into detail here.