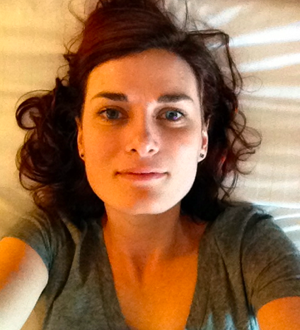 Publishing is currently going through a rough period. Writers are publishing stuff themselves, publishers are merging to create super-publishers (or perhaps this is just a sign of desperation). Anyway, we at Book Riot love books in all shapes and forms, regardless of the publisher, and so we decided to talk to a person who is trying something interesting.

Ksenia Anske is writing a YA book called Siren Suicides and is letting everyone who wants to watch her in the process. She has been giving the book away to beta readers and has built up a considerable following (just under 30,000 followers on Twitter) already, around a debut novel that is not even finished. Is she the next Hugh Howey? Only time, and a lot of readers, will tell.

In the interest of books and publishing, I asked her if she would answer a few questions for Book Riot, and (of course) she was thrilled. So, here you have it, an interview with Ksenia Anske, who is one of the authors turning the publishing world upside down.

1. Since this is a book site, let’s start by talking books. What are you reading now, and what are some books you really love, you know, the ones you keep recommending to people?

I’m reading The Dark Tower book 7, by Stephen King, because my boyfriend has been on my back for over 1 year to read the series, and because I’m a Stephen King fan and have read pretty much everything else by him. I didn’t even know about its existence, and I believe every writer should read it, if only for the big joke on page 363 of Book 6. Trust me, it’s worth it. And in-between breaks, when I have to take a breath, I’m reading Monty Python’s Flying Circus, Complete and Annotated. Because their penguin on pogo sticks jokes stir my brain.

What I absolutely love? Everything Stephen King. His On Writing is my writerly bible, and I recommend it to everyone. Everything J.K. Rowling, Harry Potter, of course, and I loved The Casual Vacancy, despite its not very enthusiastic reviews. Everything Chuck Palahniuk, especially Fight Club. Loved 1Q84 by Haruki Murakami and recommend it to every beginning writer to see how plot is secondary and characters are first, plus, of course, to dab in his fantastic imagination.

I also recommend two other awesome non-fiction books to people. The Go-Giver, and The Elements of Style. Well, I recommend even more, but I better stop here.

2. You are in the process of writing your first novel, Siren Suicides, and have stated that you will give it away. Do you think you will stick to this? Have you made up your mind about not trying to get it traditionally published and do you think that this is the way to go for new writers?

I have been giving it away already, starting from draft 4, to beta readers, to cries of some writers, “What are you doing! Don’t let them in! You are crazy! 150 Beta Readers? Who does that! You should copyright it!!!” etc, etc. But I’m not crazy, I’m not writing this book to make money, I’m writing it to spread my story, to change this world for the better, or die trying. I was suicidal 2 years ago, and, you know, after you’re standing in your kitchen at night with a big butcher’s knife pressed to your stomach, contemplating how much force you would need to cut yourself open… After you wake up from this self-hate daze and whisper under your breath, “Oh my God, what the hell am I doing?!?” After that, your priorities change.

I have enough savings to last me for close to 9 months, if I’m careful, give or take. I sold my car to write, got rid of most of my possessions and changed my diet so I can eat less and cheaper. All of this, TO WRITE. I was hit by a truck, for real, while biking home from work two years ago. I woke up in the hospital and decided, “This is it!” If I won’t start writing now, it will be too late. So I quit my career to write. I write for therapy, to shed my pain. And to help others shed their pain, hopefully.

3. You were inspired by Amanda Palmer’s TED talk to give your as-yet-unpublished book away and only ask people to pay for it if they want. Have you made up your mind about not trying to get it traditionally published and do you think that this is the way to go for new writers?

Watching Amanda Palmer’s talk was simply the last straw in a decision that was already brewing in my head. To give my book away for free. I’ve talked to a lot of friends about this who encouraged me, I’ve gotten the same advice from Seth Godin, who has been a mentor of sorts via email. I’ve been following what Cory Doctorow does. And I have been overwhelmed with demand from my beta readers, and their friends. They want to read my book NOW. It will take about 2 years for Siren Suicides to make it into stores if I go the traditional way. I don’t want to wait this long. But it doesn’t mean I’m closed to the idea, no, not at all. I’m following Hugh Howey’s example (he is one of my mentors as well, via email, patiently answering a million of my stupid questions). He gave away Wool for free first, then self-published, and then got picked up by Simon & Schuster. Will I stick to this? I WILL TRY!

My beta readers talked me into putting up a “Donate” button on my site, and within the first hour I got $60 on a book that is not finished and not even published yet! Overwhelming. Does this scare me? Of course it scares me.

Check out Ksenia’s blog if you want to know more about her, and her approach to publishing.