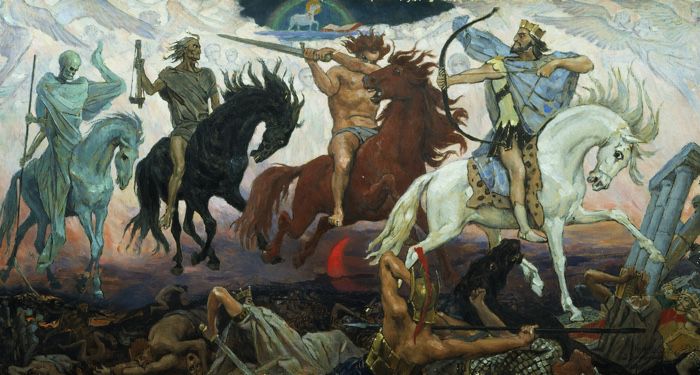 Content Warning: The following contains a discussion of violence, torture, death from disease, and imprisonment.

“I think I’ve come to the end of romance,” I texted my friend right after Amazon Kindle recommended Pestilence by Laura Thalassa. Pestilence is a romance about one of the four horsemen of the apocalypse. It came off as a novel concept in a sub-genre of good-looking monster or villain romance books. Anywhere you throw a stone you can find a romance about some hot monster or villain. Popular protagonists include Lucifer, Hades, demons, vampires, werewolves, ornery dragons, ornery dragon CEOs, abducting aliens, alien princes, mutants, angels on a vengeance, ornery alien dragon CEOs…the list goes on. But no matter what they are, in human form they are always, 100% grade-A beefcake.

The four horsemen as protagonists, though? Not as often as one would think. The idea has a lot of merit; four horsemen means you could milk out at least four books. More if you include other “characters” of the apocalypse or a sprawling cast. That is what Thalassa is doing here, having published three of the Four Horsemen books. I mentioned in 2019 that I tend to pull myself into fun-to-read romance books when I’m stressed. In 2020, I have become a connoisseur of schlocky shifter romances and romantic comedies when I’m not cowering under a blanket while doom scrolling. When the Amazon Kindle app recommended Pestilence as the start of a whole new series, I thought there would be some delicious irony in reading a fun, albeit ridiculous, romance about the plague bringer.

This was not that.

Romance and Other Horrors

The books have all the general hallmarks of one of these dark romances. God has called down the apocalypse and sent the four horsemen to begin the end of the world. The four horsemen are all hotter-than-sin hunks, that’s a given. And of course they are all changed by the love of a plucky heroine. On the surface, this fits a typical narrative of this genre. It is in the execution of this narrative that makes this particular series all the more visceral and (practically) genre busting, as well as personally sending me into a moral crisis.

These books are violent in a way that differentiates them from some other dark romance books. Good body horror, like good eroticism, has a very tactile quality to it. It stands to reason that writing one part well will result in writing the other. It is also not unusual to have bombastic fight scenes where the hero and/or heroine get beaten to a pulp. Thalassa’s work has that, but it is wholly more grotesque, focusing on the horrific over the romantic. Death does not happen off page or in short bursts; it is a constant companion to the plot. The male leads are also largely more cruel, and unapologetic for murdering leagues of people and inflicting loads of violence on their love interests. They are not reluctant villains, they are relentless.

A Steady March of Terrors

For instance, in Pestilence the protagonist and narrator, Sara, tries to kill Pestilence when he rides into her town. For her trouble, he captures her, takes her prisoner, and proceeds to tie her to his horse. He forces her to run behind it as they travel through Canada. He finds different ways to torture and humiliate her while he travels to spread plague.

That’s not even the worst of it. We also are treated to graphic representations of how the disease eats at its victims. They are feverish and withering away from coming into contact with him. In one emotional instance, the leads are taken in by an elderly couple who have made their peace with the end of the world. The couple cooks for them and talks to them, until ultimately Sara ends up caring for them while they wither away in their presence. Sara begs Pestilence to show some mercy, to stop. He does not for a very long period of the book.

Miriam, an arrow-maker, gets captured by the second horseman and his army in book 2, War. While traveling with him as his prisoner, she witnesses him and his war band slaughter and capture city after city. When they bring captives back to camp, War oversees a ritual wherein the captives are offered a place in the army. If they decline, they are massacred on the spot. Miriam is a witness, and at times a participant, in the endless march of death.

The most recent one, Famine, has his soon-to-be love interest, Ana, stabbed and left in a mass grave among the dying and rotting bodies.

“Vaguely, it registers that I’m sitting in the unfinished pool, and that someone has thrown mounds of dirt back into the craterous pit. But that’s not what’s truly snagging my attention.

Little more than a meter away, I see a face peering up through the soil like some newly sprouted plant, its mouth slightly agape, dirt lightly sprinkled across its open eyes which stare blankly into the distance.

A sound slips out of me as my gaze darts over the rest of my surroundings. To my left I see a leg and part of someone’s torso sticking out of the dirt, to my right I see a shoulder and the arm of yet another body.

My hands brace against something lumpy and vaguely hard. I glance down only to realize this whole time I’ve been pushing against the face of the mayor’s wife, two of my fingers are brushing against her teeth.”

—from Famine by Laura Thalassa

Famine is in no way a passive killer in the way that Pestilence was. Instead he opts for using killer plants to violently slaughter cities and villages when they are not dying fast enough. Or he utilizes the cruelest of people to carry out his mission for the illusion of leniency. He often resorts to impaling his victims through their torsos and letting them rot in the sun.

In each of these installments, Thalassa is clear to explain that these horsemen are not male representations of their namesake. No, Pestilence is disease, War is war, and Famine is famine. All three are made flesh for the purposes of carrying out the apocalypse. They did not have bodies before being called to duty. It goes a long way in explaining their inhumanity.

Not that that is particularly comforting. Especially when you were expecting Nalini Singh’s Archangel’s Storm and you’re reading something closer to Cormac McCarthy’s The Road. The focus here is less on the romance than on the violence that seems all too reminiscent of real-world horrors. Or when that violence is the abusive, interpersonal violence that characterizes the initial encounters.

It is with morbid curiosity that I marathoned these books to see how these characters would be redeemed through “love.” They aren’t so much redeemed as changed, even settling down and having kids. To be fair, at that scale there really is no real chance of redemption. That answer is more fitting than trying to get the characters to do a mea culpa tour to make up for their sins. That does not bring back the dead. At very least, they can genuinely blame God for their troubles.

For their part, the heroines are not willing participants in their activities. They spend much of their books trying to stop it or outright kill the horsemen. In the real world, people have loved and continue to love men who commit atrocities. These women are not the complicit wives of despots, but doing their “best” and trying to undermine a largely hopeless situation. The theme then being that even these monstrous beings can find their humanity through experiencing love and sacrifice.

This sounds a bit reductive because it is gross oversimplification. The protagonists struggle with their feelings of helplessness, anger, guilt, and attraction. But it still manages to meet that “beast tamed by beauty” trope, albeit in a more gruesome way than is typical.

Perhaps It Is I Who Is The Monster

My biggest concern is more about what it says about me that I am so fascinated by this series. As a romance, it does not have the understanding that horror does, the expectation that you will be uncomfortable and should hope to be frightened. The expectation of most romances is more that you will find the book namesakes compelling if not alluring. In particular, wounded villains who end up reluctant of their actions. This strikes the same chord as all those devotional sites, posts, and fanfics that are endeared to other characters like Loki, Spike, Kylo Ren, Hannibal, and Pennywise (I still don’t understand that one). It’s all about the desire to come close to something dangerous and defeat it by simply being oneself. Defeating cruelty by being something deserving of love.

For my part, I’d been searching out redemptive stories and romances like that to see if I could test my personal limits of empathy. Working in mental health, the people I most admire are those with a larger capacity to forgive quickly or to have no judgement of who they work with. We work with a lot of formerly incarcerated persons and I have done my best to remove a lot of my old fears or misconceptions of people with violent histories. This is particularly difficult if you’ve been the victim of such violence.

Not that it is in my responsibility or right to “forgive” any one, but it is in my capacity to have empathy. These books are also widely extreme and fictional at the end of the day. I nor anyone should excuse those actions, but what it does model is a pattern of such empathy. An empathy, love, and forgiveness that while impossible, (and a bit ridiculous) should still be something at least a little admirable.

What can we learn?

My fascination is less with the monstrous men of these stories than with the plucky heroines who, despite themselves and their situation, struggle to stop the horror and come to understand the monstrous men they are now attached to. Perhaps we may look at that bottomless empathy as enabling, but I wonder how much of that I can model in my life and my work. Or if it is even right or moral, or useful to have that level of empathy.

Redemption, or the limitations of forgiveness, are typically executed more with less bombasticity in other genres. But romance books tend to be more fun for me when engaging in these themes. I’ve lately been drawn to these types of stories. Ones where I can muddle over the ethical implications coated in the veneer of commercial genre-romance. What I was not ready for was something so challenging that it made me reexamine my personal morality, causing me to reflect on my own discomfort with redemption, forgiveness, and cruelty. However necessary that might be.

And yes, I have preordered book 4.