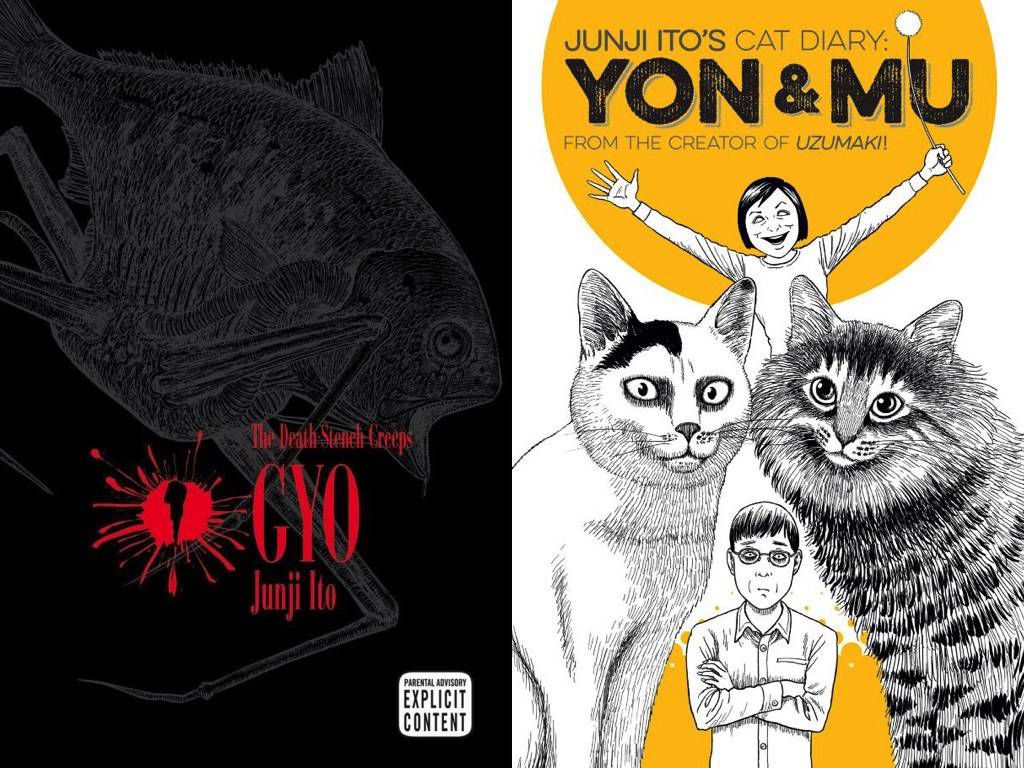 One of my friends is afraid of birds, another afraid of fish. I’ve never been able to remember which is afraid of which. Consequently, I’ve never suggested to either that we visit such dope locations as the zoo or aquarium. I deem this a profound sacrifice made out of platonic affection. Then, I’m allergic to cats, and many of my cat-owning friends have made concessions to accommodate me.

This is a meditation on cats, fish, body horror, sacrifice, and love. Besides the opening anecdote, birds don’t actually have anything to do with it.

I’ve been reading some Junji Ito lately. My spirit animal Guillermo del Toro considers him one of the foremost storytellers in the genre of horror, and indeed he is widely celebrated as a mangaka master of the macabre.

Today I want to talk about two of his works, the two volume Gyo (2002), and the recently collected Junji Ito’s Cat Diary: Yon & Mu. Both involve animals. Both involve horror. Both involve the things we do for love.

I’ve been aware of Gyo as a disturbing, big-W-Weird fish story for some time, but only recently put toe to the waters. It starts as an unnervingly creepy story about two young lovers on holiday in Okinawa who encounter a crawling fish as persistent in its pursuit as it is malodorous. Kaori is deeply rattled by the smell and pleads with Tadashi to kill and dispose of the mysterious creature, but this is one bad penny.

In terms of pure storytelling, these early chapters were most effective and affecting, limiting the disturbance to one unnatural creature and its wretched scent. Ito capitalizes on the reader’s inability to share in–and thereby limit the potency of–that terrible smell in the same way writers like Lovecraft benefited from a reader’s inability to physically see his protagonists’ visions of terror. The characters aren’t even especially articulate about the composition of the smell other than to exclaim their inability to bear its presence.

Knowledge is power and the unknowable is unyielding dread.

Cat Diary doesn’t sound like an especially harrowing title, but consider just how much fear Stephen King has wrung from his own observations on pet ownership. Animal lovers, myself included, take for granted the anxiety other people hold for the mere concept of sharing a home with these creatures. We might as well be rolling down the passenger window to greet a storm-drenched hitchhiker. Of course, pet owners also willingly accept that mad love and benefit from sharing their habitat. Endlessly curious about the dynamics of love, jealousy, community, and invasion, Ito’s vignettes amount to more than all those LiveJournal posts we’ve read from bemused dog and cat people.

Ito and his partner settle into a new home, and he reluctantly agrees to her suggestion that they share the place with cats, something she’s been accustomed to for much of her life, but is new and intimidating to Ito. The author’s heightened depiction of his own paranoia is comical but also exceptionally honest and relatable. It’s not so far removed from Robert Muldoon’s weird romance with velociraptors, and eventually evolves into more of a Chris Pratt raptor pack motorcycle gang, such is Ito’s growing obsession with nabbing the two cats’ trust and affection.

And that’s the real fun of Ito as a storyteller. Escalation. Everything ramps up, from the number of things to fear, the sheer volume of the grotesque Cronenberg style body horror, to the coals shoveled furiously into the furnace of the absurd. Ito is a gambler refusing to leave the table, constantly asking more of our suspension of disbelief until the parameters of the science fiction reach GumbyPunk levels of strange. Gyo volume two is cuckoo for Coco Puffs. Full stop. What began as a creepy, tender Haruki Murakami-ass campfire tale transitions to Showa-era Godzilla mutant invasion camp and finally to Jeff Goldblum shrieking “KANEDAAAAAAAA!!!” in a Spencer’s Gifts.

I mean that in a good way. There’s a sense of abandon to Gyo that I truly enjoyed, as Ito thrusts helplessly devoted Tadashi through mounds of rotting fish, chased by one zombie shark after another. It all works because of a somewhat asymmetrical love story, where Tadashi reads more as a dauntless older brother than loving boyfriend to the sensitive Kaori. Not that Kaori doesn’t make her own sacrifices for him. I’d explain, but that trajectory is a big part of the experience, and you also wouldn’t believe me if I told you. And you’d also be really grossed out, because this book is intensely disgusting. Let’s say this book qualifies as steampunk in very unorthodox ways.

I make no claims that Gyo or Cat Diary are timeless love stories, though I do think they’re a bit more honest than Nicholas Sparks. And only about as grotesque.