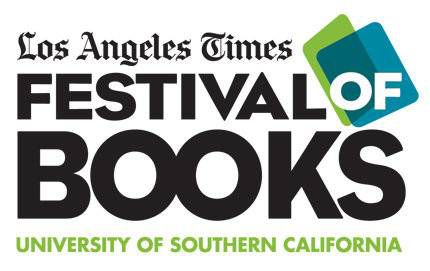 What’s your favorite holiday? Mine is Thanksgiving. My second favorite is the LA Times Festival of Books. This holiday doesn’t show up on any official calendars. You don’t get the day off but it occurs on the weekend so you might have the day off anyway. Many people haven’t even heard of it, let alone celebrate it. For me however, this annual celebration of books, reading, and the arts in general is a holiday of the highest order. It provides an opportunity not only to celebrate all things literary, but to do so with fellow devotees.

Joy – that’s what I felt the moment I stepped on the UCLA campus and saw this thing called the Festival of Books – complete and utter joy. (The University of California, Los Angeles campus used to be the festival’s home. Now it is at the University of Southern California.) It felt like arriving home even though it was my first time there. Thousands of people were talking about books, reading them, listening to other people talk about and read them, and even making art about them. I had found my people.

I had been to other book festivals and conferences. Most were small and often focused on a particular theme, offering a chance to meet local writers. Slightly bigger events attracted a well-known author or two. Some festivals had as many vendors selling jewelry and tee shirts as they did books. No matter how small or narrow in coverage I appreciated these events for no other reason than they celebrated books and reading. It was “it’s the thought that counts” sort of situation. Then I heard about the Festival of Books and saw all that I had been missing.

I knew it would be bigger than other events I’d attended. Given that the Los Angeles Times is a daily newspaper, I expected an emphasis on journalism and nonfiction. I thought it might be like that Book TV on C-SPAN. That is, authors who write nonfiction about history and politics talking about history and politics. It was described as a family event so I figured there would be something to entertain the kids while their parents engaged in serious discussions. Overall all I figured I would spend a few hours walking around the campus, listen to a few talks, pick up a couple books, and then go home. Not a bad way to spend a Saturday. It turned out I was a little bit right but mostly wrong. The Festival of Books turned out to be so much more than I imagined.

The first thing I did upon arriving at the festival was stop and stare. Everyone seemed to have a book in his or her hand. Every other person carried a tote bag or wore a tee shirt referencing a book or pop culture. I wandered from booth to booth and panel to panel. Chefs prepared dishes from their new cookbooks. Teenage poets performed their spoken word poetry. Authors and readers discussed the significance of the paranormal in young adult fiction. It was overwhelming in the best way possible. It was wonderful.

I love reading and engaging with others who love reading. Growing up I had friends who read, but most of them didn’t. The internet made it easier for people who share similar interests to find each other. Whole communities exist online around like-minded souls. This site is one example. That such online communities exist is wonderful. Still it is nice, more than nice actually, to occasionally be physically surrounded by people who share one’s interests. I’ve never been to Comic-Con but I imagine attendees feel a similar rush of serotonin. My book club provides this feeling well. The Festival of Books is like book club times a thousand. And so every year I go to the festival and celebrate my second favorite holiday. Along the way I get a visual reminder that there are thousands of people who are passionate books just like me.