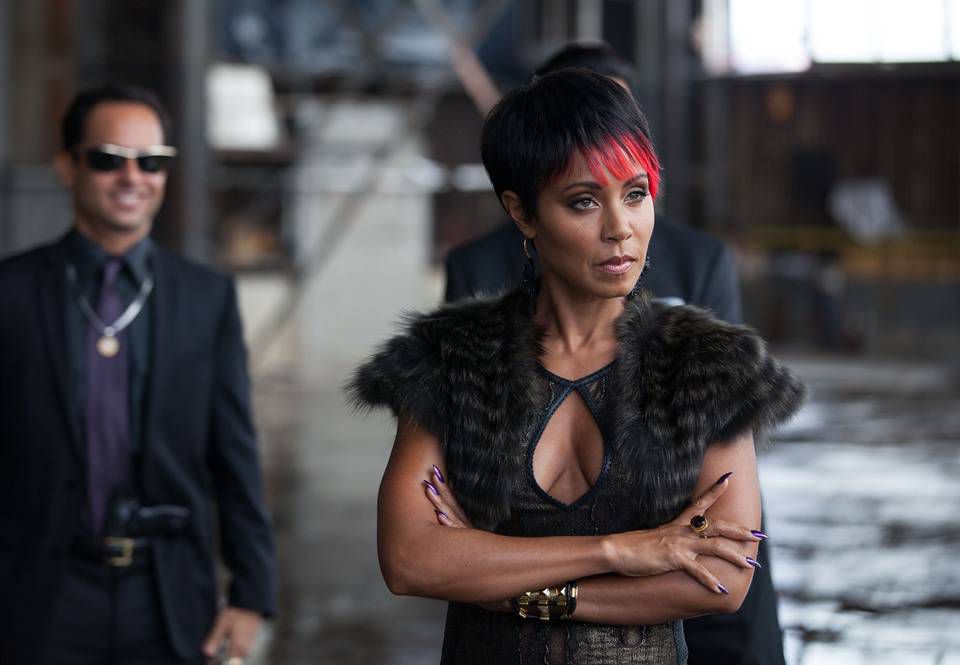 Full disclosure: I gave up on the story of the new television series, GOTHAM. But I keep reading the recaps. This is largely due to my interest in seeing what the characters are wearing each week. I find the costumes of the show fascinating, and invited genre-fashion blogger Anika Dane to talk more about the clothes and styles of GOTHAM.

Sigrid: As a casual observer of the show, it seems that a lot of thought has gone into the semiotics of the characters. Broadly speaking, everyone on the show seems to be wearing social armor. Yet all the characters have individual looks. Can you describe how this works? Whose armored looks are most interesting to you, and why?

Anika: There are both social and personal cues in play, yes, and they are both very helpful when there’s a cast this large. Layer one is social norms, and it includes dress codes, class differences, tropes. For example, the audience can tell the difference between beat cops and detectives in the GPD because the detectives wear suits. That’s something we recognize instantly from our own experience or twenty years of Law & Order. Little Bruce Wayne doesn’t wear blue jeans because they’re beneath his station. Little Selina Kyle’s leather jacket and gloves indicate she’s tough.

Layer two is personal character design — the choices the character, and costumer, make to differentiate them from the crowd. Edward Nygma wears stripes instead of solids. Harvey Bullock has a favorite hat. Some characters cultivate an entire look: Oswald’s dapper penguin, Selina’s street cat. I find the details most interesting. Oswald dresses for the job he wants, not the job he has, but he does it — well, not quite wrong, but not quite right. So there’s an added awkwardness, but that has actually helped him get by and gain power.

I love Fish Mooney’s costuming. She has the most variety in her wardrobe, but her design is very clear. She dresses herself up like a fancy, exotic, dangerous animal. Jada Pinkkett Smith is tiny but Fish has an enormous presence. She’s always the most colorful person in the room. But all of her jewelry looks like a weapon.

She looks like a weapon, and it’s not concealed, it’s in plain sight. The only other character costumed that way is Jim Gordon. He’s probably the least interesting to look at, clothing wise, but that’s the point — his power is found in being a normal guy taking a stand. But Jim’s and Fish’s costume design link them together and it supports the story.

Sigrid: In what way do you think Jim Gordon’s look reveals him as a weapon? Because I find him boring as watching paint dry, honestly…

Anika: Well, I mean to put the emphasis on “not concealed” over “weapon” in that comparison — they both hide their ambitions in plain sight. Jim is coded as exactly what he is: thirtysomething educated straight white male with a white collar job. And he’s the hero. He has all the power and he’s set up to succeed. He is his own weapon. Harvey, though he has the exact same job, wears the leather coat and jacket because he doesn’t have Jim’s confidence, he needs to be reminded who he is. You’re right, Jim is totally boring, but I think it’s on purpose.

Sigrid: So, tell me about the different gangsters. How does the show distinguish between the mob factions, sartorially?

Anika: I’d say Falcone is old money, and old world, while Maroni lives more in the moment. Falcone dresses down by taking off his suit jacket to reveal suspenders while Maroni takes off his tie and unbuttons his collar. It tells me that Carmine never really relaxes, never stops plotting. And Sal is more willing to get his hands dirty personally, and has more fun. Falcone’s people are also dressier than Maroni’s — contrast Fish and Nikolai in colors and high end fabrics with Frankie Carbone in thug leathers black on black. Even his name sounds lower class.

Also Carmine Falcone has a bird thing — the chickens, the pigeons, his name — and the people closest to him, Oswald and Fish, fit into it. Penguin is obvious but Fish has the plumage. She wears plenty of feathers, is surrounded by songbird trappings, and complains of being caged in.  Zsasz has a vulture thing going. Even Liza could be a dove or swan as well as a pawn.

Sigrid: So, animals are one sartorial axis. Is there another? Do we have color or fabric themes?

Sigrid: Any other observations you have about the fashion of the show? A character you’d like to highlight? What about Selina, or Barbara Keen?

Anika: Selina’s look is my absolute favorite and has been from the release of the first character posters. I bought her goggles. I love that it is a character design created by the character, she chose her own persona and plays it up every chance she gets. That is closer to the themes of the source material than others in the series but is also something teen girls do and I love that about her. I’m also happy with the recent reveal in The Mask that she is just as much a pint size cat burglar stealing for kicks as a scrappy street kid stealing to stay alive. Her outfit is made up of pieces found in our real world and would cost at least $800 but until that episode I couldn’t tell if the audience was meant to realize that. Now I feel like Selina specifically shoplifted a high end leather jacket because she could.

As for Barbara, I honestly find her fascinating. We started this discussion with social armor and Barbara doesn’t seem to have any. It’s particularly interesting to contrast her with the other women in the story. Essen and Montoya are ‘armored’ by adhering to the dress code of their profession while Fish and Selina are ‘armored’ by crafting a look that fits the image they want to project. Barbara is consistently dressed in soft fabrics and muted, neutral colors. She’s worn what amounts to (sexy) pajamas in at least three scenes and in her kidnapping scene her skirt was so close to her skin color I wasn’t sure she was wearing one. The most generous thing I can say about the way Barbara has been presented thus far is that she’s a blank slate, a canvas that until now has been waiting for Jim Gordon to paint in her purpose. But she’s left him and that gives me hope. Of the five women she has the most privilege, is closest to the Wayne type of Gothamite and if the death of the Waynes means the city has to save itself — maybe Barbara is being set up to save herself, too. That’s what I’m hoping for.

Sigrid: I’m with you in that hope! Thanks again for joining us, Anika, and good luck with your future Gotham cosplays!

Anika Dame can be found at manicpixiedust.com. She is the staff fashion blogger at both Fantastic Fangirls and What the Fangirl. Her thoughts on geek fashion can also be found in the Hugo-Award-nominated essay collection Chicks Dig Comics. She tweets @manicpixiedane.