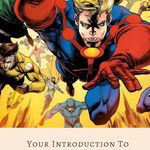 Longtime rumors about the Marvelverse were confirmed at San Diego Comic Con when Marvel Studios president Kevin Feige announced a film about the Eternals will be part of its Phase 4 of the Marvel Cinematic Universe (MCU). The film will release on November 6, 2020. 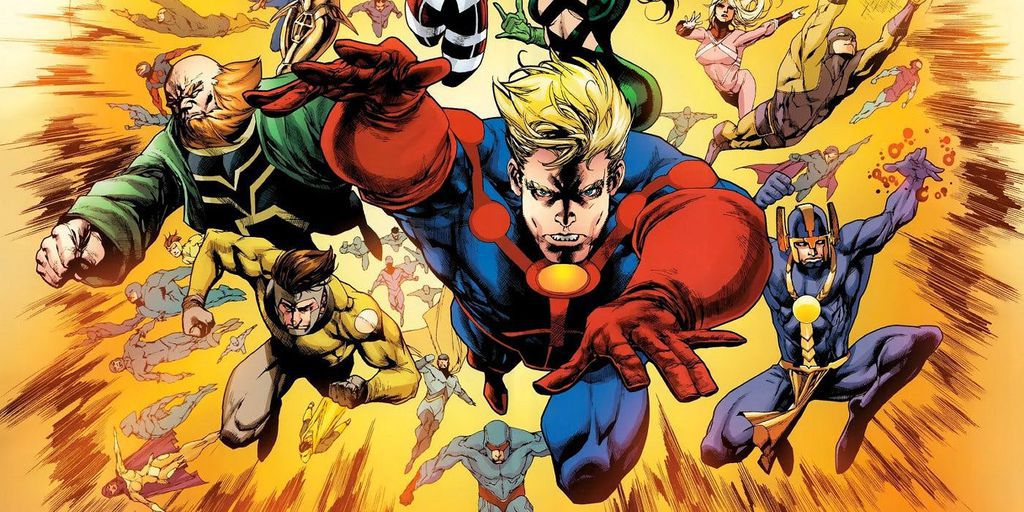 Great. Who are the Eternals?

If the Eternals don’t sound familiar to you, you’re not alone—even among Marvelverse fans, this is going pretty deep.

Back in the 1970s, Jack Kirby left Marvel and did a stint with DC, where he created a comic called New Gods. But the series was unceremoniously cut short with several loose ends unresolved. So Kirby returned to Marvel, and quickly got to work on a new comic—the first he got to create, write and draw without co-creators: The Eternals.

Kirby was known for stories of galactic proportions and larger-than-life characters, and in this comic, Kirby took this penchant for the epic to the max. As it happens, the themes and setup are pretty similar to New Gods, but for now let’s focus on the Eternals.

What’s The Eternals about?

To tell you about the Eternals, I have to start with the Celestials.

Fine, tell me about the Celestials then.

The Celestials are god-like aliens who built robot-like bodies for themselves to contain their consciousness. We have seen Celestials already in the MCU. You may remember in Guardians of the Galaxy we were shown footage of a Celestial using the Power stone to destroy all life on a planet about a thousand years ago.

However, it seems that something might have happened to the Celestials. First, we have Peter Quill’s Celestial father, Ego, who seems to have been abandoned before he had consciousness, since he found himself to be utterly alone.

And Exhibit B, we have Knowhere, which is built from the decapitated head of a Celestial. If this is not enough evidence of the Celestials’ fall from power, I point you to the mining community picking away at its brain tissue from within its skull. How much these points will play into the Eternals film is TBD, so we’ll keep moving.

Thank you. So the Eternals?

The long and short of it is, about 5 million years ago, the Celestials came to Earth and performed experiments on humans, as aliens do. From those experiments came two new races: the Eternals and the Deviants.

The Eternals were powerful and all but immortal, with abilities including super strength, flight, telepathy, energy blasts—all your most excellent classic superhero stuff. Over time, most Eternals choose on one superpower to hone. But beyond this, the Eternals can also fuse their consciousness into the Uni Mind, a shared consciousness.

Since they live forever, procreation is extremely rare—though they do have frequent romantic arcs with each other and with humans. On the unusual occurrence of offspring from an Eternal and a human, the baby is fully human.

The Eternals were set as the guardians over the Earth. Humans often confuse the Eternals for gods, and thus, Marvel mythos includes Eternals as the real players behind some of mankind’s biggest historic moments of miracle and crisis, like the flood. In this way, the Eternals are woven into human history from the ages.

Further, the Celestials’ experiments also led to the possibility of superheroes among humans, so the story of the Eternals offers up the origin story behind all the origin stories of the Marvelverse.

Thing is, the Eternals were constantly battling the Deviants.

And what exactly are the Deviants?

The Deviants were the Eternals’ foils and adversaries, created through a genetic mutation that manifests differently in each one—but generally, they’re considered hideous. They worship the Dreaming Celestial, and are extremely advanced compared to normal humans. Eventually, the Eternals sunk the Deviants’ continent underground, where they now live.

Bonus fact: Thanos was a Deviant.

Unfortunately, much like Kirby’s DC series, The Eternals was abruptly cut short before its planned conclusion, with several loose ends unaddressed.

Right? But much like its namesake characters, The Eternals continued to live on through the decades despite this.

At the time of the comic’s cancellation, Roy Thomas and Mark Gruenwald were working on a concurrently running Thor arc. They folded the Eternals into the story and managed to address the loose ends.

After that, the Eternals continued to float around other Marvelverse titles for years with appearances and mentions.

Then came a series of miniseries. First in 1985, then again in 2000 with a single issue event, and in 2003 with a much more adult take for the Max imprint.

Most notably, the Eternals were revived in a seven-part miniseries from Neil Gaiman and John Romita, Jr. in 2006, which brought the Eternals into modern day.

So what’s the Eternals movie about?

We don’t know for sure, but there’s been a lot of speculation and rumors—and a lot of ways the film could pivot to take advantage of the existing MCU.

Back in spring 2019, it was rumored the film would focus on the Eternal Sersi, and that Angelina Jolie was in talks for this role. Further, it was believed that the plot would focus heavily on a romantic plot between Sirsi and another Eternal. Jolie, however, ended up in a different role, and these rumors have largely died down.

With the Eternals’ ties already established in the MCU to Guardians of the Galaxy, and the rumored Easter egg of Project Extremis in Iron Man 3—in short, this tech is believed to work by unlocking the mutation the Celestials caused from their experimentation, to trigger superhuman powers—these could be inroads to tie the plot back into the rest of the MCU.

It’s also possible the film could tie in with Thor, given the comic’s ties to this superhero after its original series cancellation.

Right now, however, the best bets are on a movie modeled after the Gaiman/Romita revamp. In this story, Sprite has cast a spell that causes the Eternals to forget who they are, and they live among humans believing they are like everyone else. But as the Celestials return to judge Earth, the Eternals are the only hope to sway their judgment. As the pressure rises, some of the Eternals start to have dreams that reveal their true identity.

This is the 132-zillionth Marvel movie. Why do I care anymore?

It will be the 25th film of the MCU, actually, but your point stands. That said, Marvel is upping its game for this one in some positive ways.

First off, the cast is stuffed full of A-list talent and rising stars: 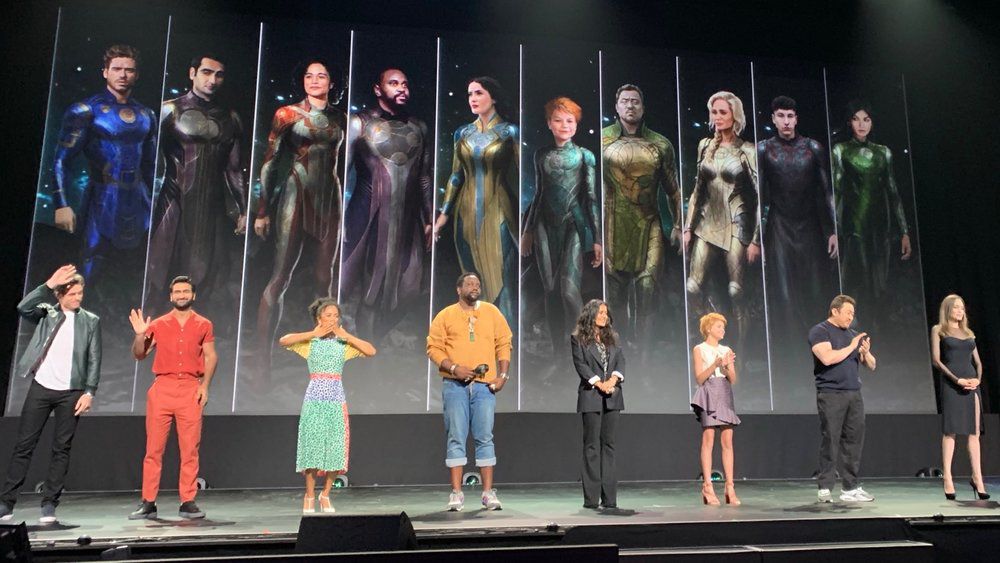 Yes, the Angelina Jolie has joined the MCU. She will be portraying Thena, a character inspired by the goddess Minerva and occasionally confused with Athena (Athens was, in fact, created in honor of Thena). Both a warrior and a scholar, at the opening of the Gaiman/Romita comic, she is a researcher at Stark Enterprises.

Madden has rocketed through a series of films since leaving Game of Thrones as Rob Stark, including The Take and Rocketman. In The Eternals, he will play Eternals leader Ikaris. Powered by cosmic energy, his powers include super speed, super strength, telepathy, agility and more.

Best known as Astrid from Crazy Rich Asians, Chan will play an Eternal with greater interest in humanity than most of the others. Her friendship with Homer led to the character Circe in The Odyssey. She also trapped the imps in Pandora’s Box, assisted Merlin defeat an imposter, and other adventures.

Another source of major star power for the film, Hayek’s role as Ajak flips the character’s gender. As the only Eternal with the ability to communicate with the Celestials, Ajak often serves as a diplomat between the two races.

Another Game of Thrones alum, Harington’s character is the only one announced so far that isn’t an Eternal. Rather, Dane Whitman is human who took on an alternate persona as the Black Knight after inheriting a castle and discovering his uncle’s villainous past.

Henry is best known for Paper Boi and his Emmy-winning work on the television show Atlanta. As Phastos, he will play an Eternal who creates all of the Eternals’ high-tech gear.

Known for The Killing of a Sacred Deer, Keoghan is an up-and-comer. As Druig, he will portray an Eternal who served in the KGB and discovered he enjoys torturing people. He’s also Ikarus’s cousin.

The Pakistani American comedian and writer (The Big Sick) will take on the role of an Eternal who has opted for Samurai training rather than an Eternal power for his fighting, and wields a sword with the ability to cut through anything.

At 12 years old, McHugh is the youngest actor of the cast. But this is hardly her first rodeo, with previous roles in Totem, The Lodge, and Into the Dark. Her character Sprite is as ageless as the other Eternals, but maintains the physicality of a child. A trickster, Sprite frequently causes trouble with her pranks.

Also known as Don Lee, Ma Dong-Seuk has built a career as one of the most bankable actors of South Korea. Gilgamesh is an Eternal and also fought with the Avengers many times in the comics. He’s a bit of a black sheep among the Eternals, who think he meddles too much with humans.

Ridloff is making history with this role. Ridloff is deaf, and she will be playing the MCU’s first deaf superhero. Further, Fiege has also confirmed the film will feature MCU’s first LGBTQ superhero.

If that’s not enough, check out the film’s director, Chloe Zhao. A rising star of indie films, her most recent release The Rider won several awards. She has said that though the characters are immortal, the themes will focus on what it means to be human.

The Eternals film is still over a year away and there is a lot about the film we still don’t know, but MCU seems determined to deliver in ways they have fallen short in the past, and with fresh talent at the helm, this new phase of the films may offer something new.