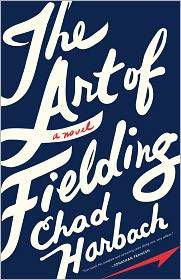 A few weeks ago, Chad Harbach’s debut novel The Art of Fielding was excerpted in Sports Illustrated. I couldn’t tell you the last time that happened; that SI teased literary fiction (much less a debut, and much less a non-SI writer). But I’d be willing to bet it was long before Barry Bonds’ head swelled to roughly the size of a beach ball. In other words, it’s been a really long time.

Harbach’s novel has done the near-impossible: It’s united the literary and sports worlds; worlds that tend to mix about as frequently as an unassisted triple play.

And now that I’m pretty much out of baseball metaphors, I’ll tell you this: Understanding why there aren’t more literary sports novels is pretty simple. As this Atlantic article from last week explains (though a tad tediously, but it led by mentioning Matt Christopher, so I couldn’t stay mad at it), your average avid sports fan, who is usually male, doesn’t read literary fiction. And your average reader of literary fiction isn’t usually a sports fan. What’s more, your average literary fiction novelist doesn’t deign to write about something as “unsubstantial” as sports.

Makes sense, right? It does to me. I mean, I wish it weren’t true; I wish that there were more good literary sports novels. But you know what? There are still some very good ones. Indeed, two of my favorite novels of all time are about sports. And while “literary” means different things to different people, it’d be easy to argue that both of these fit whatever that bill is. (Side note: I’m only halfway through The Art of Fielding, but it’s not out of the question that it’ll join the “favorite novel” pantheon.)

The Brothers K, by David James Duncan — This is a near-perfect literary novel, and at its core: baseball. The story itself is about the fortunes of the Chase family as they navigate the 20th century. Papa Chase is an erstwhile top pitching prospect (he’s just about to be called up by the White Sox when he’s drafted and sent to Korea) and then inspirational comeback story, and the oldest boy Peter is a star at his high school. The novel includes long essays about Roger Maris and Papa Chase give us insight into why Ted Williams was the brilliant hitter he was (partly due to the “Ted Williams Voodoo”).  Without question, this novel includes the one critically important aspect of any quality literary sports novel: authenticity. Baseball isn’t dumbed down for a mass audience here, but also, you don’t need to be an avid baseball fan to get it. It’s a wonderful balancing act. Additionally, baseball as a metaphor for life has never been rendered more faithfully as it has here. This is a novel I’ve recommended to several of my male friends who only read occasionally, and to a man, they’ve loved it. You will too. (Side note: Duncan blurbed The Art of Fielding – cementing a connection between two of the best baseball novels of the last 20 years.)

The Power of One, by Bryce Courtenay — I was more surprised that I enjoyed a boxing novel than Evander Holyfield must’ve been when Mike Tyson bit his ear. I’m not a boxing fan at all, but I’m a gigantically enormous fan of this novel. Peekay, a young mixed race South African, rises through the ranks as a prodigy boxer in the late 1930s. Even just typing that sentence, I’m still amazed that I think of this novel as fondly as I do. Why do I love it? It’s one of the most inspirational literary underdog stories you’ll find, period. No, you don’t need to be a boxing fan to enjoy this novel. You just need to enjoy a tale of the bond of mentorship, overcoming impossible odds, and always keeping an open mind.

How about you? What are your favorite literary sports novels? Don’t you wish there were more, too?

(Side note: Here’s one of my favorite literary baseball quotes of all time, from Jonathan Franzen’s The Corrections: “I suppose that a country that teaches creationism in its schools may be forgiven for believing that baseball does not derive from cricket.”)