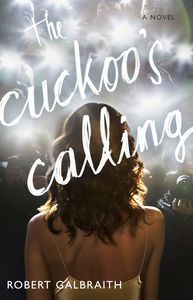 In the wake of JK Rowling’s lawyer blabbing to friends and sundry that she wrote The Cuckoo’s Calling under the pseudonym Robert Galbraith, there appears to be a bit of an obsession on the internet (mostly by other authors) over why The Cuckoo’s Calling wasn’t more successful prior to the announcement. Although the detective novel received across-the-board praise from the critics, including a starred review in Publisher’s Weekly, only about 1500 copies were sold between its release and the reveal that it was penned by everyone’s favorite wizarding author (some estimates are much lower, around 500). This has been used as an example to show how difficult it is to be successful as an author, that mystery readers are the most unadventurous readers on the planet, and that people are only attracted to books with explosions. Dan Brown strikes again!

Actually, I would propose the reasons why The Cuckoo’s Calling didn’t sell more books BR (before Rowling) are more about the book itself than the publishing industry. For one, the title. The Cuckoo’s Calling is a HORRIBLE title. What does it mean? Is the novel about a clock? The ideal profession for birds? I’m more than halfway through the book right now and I still don’t even know. If I, wandering like a baby lamb across the prairies of the bookternet or bookstore, ran across this novel not knowing anything about it other than the title on the spine, would I want to pick it up? Answer: guess.

On that note, the cover’s pretty terrible, too (at least the US cover is). When my mom first saw it, she said, “That looks like a chick lit book.” While I’m not sure I would agree with that, the cover doesn’t exactly say hardboiled detective novel, does it?

Aside from the cover and title, the choice to release The Cuckoo’s Calling in hardcover undoubtedly had an impact on sales. I know very few people who would consider shelling money out for a hardcover copy when they aren’t familiar with the author, and I include myself in that list. One wonders, in fact, why the publisher didn’t release The Cuckoo’s Calling in trade paperback if the identity of Robert Galbraith was as secret as reports imply.

Finally, several people have pointed out that The Cuckoo’s Calling, although good, is a “quiet” novel. If quiet is a code word for let’s-move-this-plot-along-and-get-to-the-point, then yes, it’s quiet. Here’s the thing: there is a lot of talking in this novel. Talking and walking, that’s all that basically goes on for about 150 pages; and none of it seems to have a point because there’s a complete lack of evidence suggesting any sort of murder. I’m sure it will all pull together eventually, but the reason I’m sure of that is because I know The Cuckoo’s Calling is by Rowling. If it was by an author I’d never read before, I’d be deeply impatient right about now (okay, I’m actually impatient anyway). I mean, yes, Josephine Tey could write incredibly gripping books consisting almost entirely of dialog; but her novels were also a hella lot shorter than this one.

That’s not to say The Cuckoo’s Calling isn’t a good book. It is very well-written, and fans of Rowling will probably enjoy it even if they don’t like mysteries. But it’s obvious from chapter one that it isn’t by a first-time author—it’s way too slick. It’s impossible to tell the gender of a writer through their writing style (despite implications to the contrary in this annoying Telegraph article), but experience? Yes. And The Cuckoo’s Calling doesn’t have the rough edges I’d expect from a novice writer.

Basically The Cuckoo’s Calling, as a book by Robert Galbraith, doesn’t make sense. It’s in hardcover, very long for mystery novel—especially of the hard-boiled PI variety—received a ton of professional reviews in respected publications, yet on the promo end (namely title and cover), there was a notable lack of effort. It is NOT representative of the average debut novel, because certain people obviously knew Rowling was the real author, that her goal was to prove to herself her work could be received positively by completely unbiased critics (hence, I would argue, the “default” white male pseudonym), and they made certain decisions based on those facts that they wouldn’t have made for an actual debut novelist. So can we please stop with the blanket applications of “Robert Galbraith’s” publishing experience to every first-time author or readers of mystery novels?