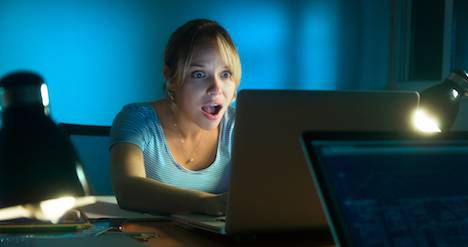 We have entered the halfway point of October. Halloween fans hang paper ghosts on people’s desks, walk in the evening and watch winds shake the leaves. We also read lots of scary stories, or listen to them. I want to discuss the Internet phenomenon of creepypasta tales.

Creepypasta, as the Creepypasta wiki puts it, “are essentially internet horror stories, passed around on forums and other sites to disturb and frighten readers. The name ‘Creepypasta’ comes from the word ‘copypasta,’ an internet slang term for a block of text that gets copied and pasted over and over again from website to website. Creepypastas are sometimes supplemented with pictures, audio and/or video footage related to the story, typically with gory, distorted, or otherwise shocking content.”

In layman’s terms, creepypasta are online campfire tales, without marshmallows and popcorn. One person doesn’t recite the tale amidst the embers of a dying fire. Your mind and technology do the work for you. You can read it against a dark screen, while the narration builds up. Something or someone in the prose creeps, to make you jump. Ideally the scare doesn’t leave a bad taste in your mouth.

People’s investments, personal and otherwise, into creepypasta makes the medium fascinating. An ongoing tale, Ben Drowned, nearly aborted when the creator Alex Hall had financial troubles. It will resume now that audience members donated the amount needed. Hall also received a film deal, which will prove interesting since his tale uses a copyrighted video game Majora’s Mask. Another creepypasta meme, Slenderman, has since become a video series on YouTube, several video games, and a pop culture phenomenon.

From my experience with creepypasta, the medium’s strength lies in suspension of disbelief. The stories portend that they actually happened, and usually involve the supernatural. Some use copyrighted entities, like Abandoned by Disney or Dead Bart, and some concoct original tales. Webcomic artist Kris Straub wrote my favorite one, Candle Cove, about an unusual kids’ show that the viewers as adults try to recall.

With all of this growing popularity and marketing, a horror aficionado would expect most creepypasta to scare us to death. Most tales, however, rely on the creep factor more than on building suspense. When writers sometimes use an established copyright, they don’t do enough research to make their tale plausible.  Abandoned by Disney, for example, claims that Disney wanted to make a theme park inspired by The Jungle Book in North Carolina. Not only does this squander the potential of a “scary Disney Theme park” concept since Disney does have darker aspects, but it just serves as padding. The Disney name adds nothing to the story, but its presence makes the financial failure of the park around the time they suffered financial troubles with EuroDisney in France seem even less plausible. Thus the tale doesn’t scare me, though the visuals catch the eye.

The good creepypasta handle suspension of disbelief with finesse. Going back to Candle Cove, the story appears as a discussion on an online forum. Given that Candle Cove doesn’t actually exist, Kris Straub could make up as many details as he liked. Even with the twist at the end, the episode summaries create creepy images. You can believe that someone would put uncanny puppets in a kids’ show.

Why does the disparity between good and bad creepypasta exist? The Internet provides that answer. Unlike in traditional publishing or even electronic publishing, a writer can publish creepypasta anywhere. Many people who try to write creepypasta are getting their feet wet with writing, and learn to build cheap scares.  The Creepypasta wiki has a guidelines page about what can be published on their website, including a list of subjects that entered the blacklist, but they can’t control what will appear on a Reddit page or an author’s personal website.

Also, creepypasta relies strongly on the “creep” factor. Some people anticipate shocking twists and visuals. For others, the mystery draws them into pondering the tale. Slenderman’s popularity, for example, lies in the mystery of what he compels people to do, whom he affects. He grew from several eerie photos because his mere appearance can unsettle the viewer. Ben Drowned, while not my favorite creepypasta, does bring up paranoia about how viruses spread through the Internet. Ben lacks depth as a villain, but boy does he have presence. His avatar through the videos and documents can make one shudder. Sometimes cheap thrills work.

I hope that someone on the Creepypasta wiki turns the tales into a published collection, or have a creepypasta anthology with higher quality tales. The medium has potential for utilizing the Internet, and when the stories are done well, they are done well.  With Halloween approaching, and the days getting longer, we always appreciate good scares. I am in the mood to get a good scare, especially from an Internet tale.