Summertime means many things for public librarians – summer reading programs, hectic children’s rooms, the glorious benefit of free air conditioning – but there’s one thing in particular that stands out for me. It’s the kind of thing that keeps me up at night and fills me with dread during the work day: dealing with school summer reading lists. Picture it: a bright-eyed, eager child enters the library, clutching a crisp piece of photocopied paper, hoping to get a head start on his summer assignments so that he can relax and enjoy the rest of his vacation, only to be told that the library does not have ANY of the items that he needs and he will have to wait weeks to get them. “I’m so sorry, we don’t have that book, can I put it on hold for you?” is something that I will have to say hundreds of times over the summer. Trust me, kids: it hurts me more than it hurts you.

(And just to prove that I’m not inventing this summer reading list angst for the purposes of this post, here’s one of my tweets from last summer. The sentiment still stands.)

Summer reading lists are to librarians what crucifixes are to vampires. (And we don't have the promise of a stake through the heart.)

In general, this deficit of summer reading assignment books usually happens for the following two reasons: 1) the library system does not have enough copies because of high demand (and we were not consulted to order more OR we don’t have the budget to do so) 2) the books assigned by the school have been out of print for years and there’s no chance in hell of getting them anyway.

Then there’s the more “controversial” issue of summer reading lists containing spelling errors and incorrect titles/author names being given to kids who then have to navigate on their own to find the books. I admit, when I see lists like these in my day-to-day library life, I get up on my high horse (even though I am pro-teacher and pro-public education) and think “How could a teacher hand this out to students? How hard is it to look up the correct title?” Apparently, it is a common problem, and I now believe it’s more complicated than we think.

Yesterday, NBC New York posted an article that puts one unfortunate Long Island high school in the spotlight for handing out a summer reading list full of amusing but ultimately disturbing errors. (You can also see the original Newsday article here, which shows the enthusiastic but mistake-riddled cover letter from the school.)

Here are some of the mistakes found on the book list (from NBCnewyork.com): “F. Scott Fitzgerald’s ‘The Great Gatsby’ is misspelled as ‘The Great Gypsy.’ Author Emily Bronte is listed as ‘Bonte.’ George Orwell is called ‘Ornell,’ and Frederick Douglass is listed as ‘Douglas.’ Maya Angelou’s 1969 autobiography is referred to as ‘I Know Why Caged Birds Sing,’ and Alice Sebold’s 2002 novel, later made into a film, is listed as ‘The Lovely Bone.'”

Now, I realize that it’s easy to laugh (I mean, The Lovely Bone? C’mon, that’s HILARIOUS) and scoff and be outraged by this egregious display of ignorance and carelessness. However, there are other things at play here. First of all, I think it’s unfair of Newsday to single out Hempstead when the problem is not limited to just this school. (This doesn’t excuse the mistakes outright, but it’s wrong to vilify one school for an issue that faces many schools, especially without discussing some of the economic factors that might contribute to the difficulties they face.) I also honestly don’t see the errors as being totally life-ruining for students (and I was once a high school English teacher myself who expected a lot from my own students). Fortunately, many kids take advantage of their local libraries, where trained professionals are able to sort these problems out. Librarians to the rescue!

It is reasonable to hold educators up to higher standards, but the point in the article about the school not having a “stable administration” might be a good one. Are these faulty reading lists indicative of a larger problem within the educational system? With crazier and crazier demands being placed on teachers, who is actually writing these lists and letters in the first place? Is it the teachers themselves, or overworked paraprofessionals who might not have the same access to information nor the time to proofread for mistakes? Does it matter?

After a discussion sparked on Twitter, youth services librarian Liz Burns told me this: “There are always some mistakes (and librarians would say they saw these 5 and 10 years ago, I’m sure), but I believe part of it has to be either overworked staff or eliminated staff…schools have been hit with staff elimination and reductions, and the whole ‘doing the same with less’ (or doing more with less) mentality. Once that happens, people have less time to proofread.”

So, is it just plain sloppiness, or is it actually a matter of teacher support lacking in schools? (Or maybe a little of both?) I don’t think there are any easy answers. I DO think it’s a discussion worth having, but not in the finger-pointy way that the media has done it in this case. As I’ve learned by working with kids, shame is not an educational tool. I am personally going to try to do better in my own small way – instead of rolling my eyes and muttering under my breath when I encounter a reading list that contains a reference to something like “20,000 Leagues Under the Water by Jules Verne” (a kid actually DID ask for this once, although in all honesty I don’t think it was the fault of his teacher), I’m going to simply correct it and make sure the kid gets the right book he needs. That’s what librarians are there for, after all. And, in a larger sense, I hope that schools and libraries start working more closely together to do what’s best for the students. We’re all working towards the same goal, in the end.

On a lighter note, the handwritten book list below was left behind in my library by a kid last summer. Pay particular attention to the second-to-last item. It’s a perfect example of how a small spelling error can change the meaning and perception of a book title. Teachers, something to think about. 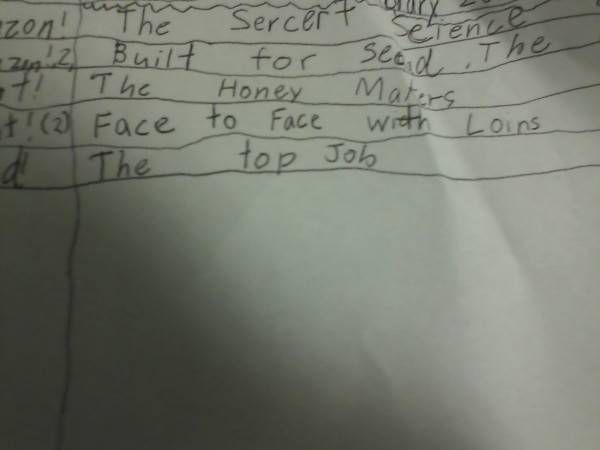 (If I’ve made any errors in this post, it was just a test to see if you’d notice. Yeah…yeah, that’s it.)