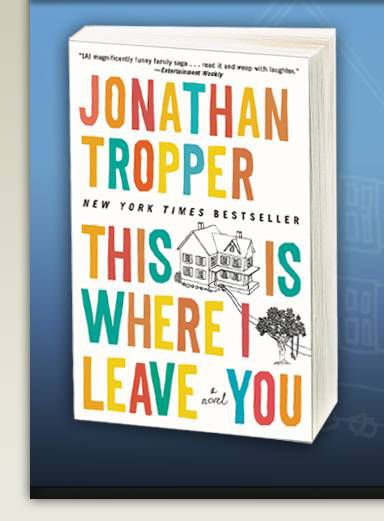 Details continue to emerge about a possible film adaptation for Jonathan Tropper’s fantastic 2009 novel This Is Where I Leave You. When I caught Tropper at a reading in July 2010, he’d finished the screenplay and mentioned that a “famous director” was attached, but he still seemed skeptical that the movie would ever see the light of day. “Any movie that doesn’t have a superhero doesn’t get made anymore,” he said. Now, though, it seems like a realistic possibility. Let’s take a look at what we know about the film so far, and gauge its chances. 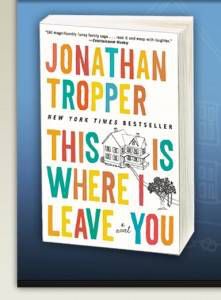 With lines like “He is the Paul McCartney of our family: better looking than the rest of us, always facing a different direction in pictures, and occasionally rumored to be dead” and “My marriage ended the way these things do: with paramedics and cheesecake,” the source material is as film-ready as it comes. Again, Tropper wrote the screenplay, so confidence is high that the source material will turn out well on screen. At that July 2010 reading, Tropper mentioned that one of his favorite writers is Richard Russo, who had great success adapting his own novel Empire Falls into a terrific HBO miniseries. Oh, and the story about siblings coming to sit shiva for their father in the midst of their own relationship and personal crises is as rich with built-in conflict and comedy as source material for a film gets.

I don’t know whether Adam Shankman is the “famous director” Tropper said was attached two years ago, but in mind, this guy’s not exactly a household name. Most recently, he’s directed the Tom Cruise vehicle Rock of Ages — which, is one of my personal most-anticipated movies of this summer. So, that’s a plus. Minus: Probably Shankman’s two most well-known directing credits are 2007’s Hairspray (which I haven’t seen) and  2001’s Jennifer Lopez/Matt McConaughey dud The Wedding Planner (which I’m REALLY GLAD I haven’t seen). So, frankly, confidence isn’t high on this one, but you never know…

All the actors, including Jason Bateman, Jason Sudeikis, Zac Efron, Leslie Mann, Goldie Hawn, and Malin Akerman, are in “various stages of negotiations,” according to most of the Hollywood trade pubs. If they all wind up in the film, this is a very, very solid cast. Presumably, Bateman plays Judd (rumors still swirl about exact roles), the protagonist and narrator. Bateman’s constant comic exasperation, as displayed in Horrible Bosses and Arrested Development, will make him a fantastic Judd. A+ casting here. Rumors are that Sudeikis would play Judd’s radio disc jockey boss whom Judd catches sleeping with his wife (not sure about this — Sudeikis could do the cheesy DJ way, way over the top here), Efron would play youngest brother and playboy Phillip (I’ll abstain here. I hate Efron, but this might work.), Mann would play oldest sister Wendy (Mann can be a good harpy, so good here), Akerman would play Judd’s cheating wife (she’s hot, so okay, but I have no idea) and Hawn would play the recently-turned-lesbian mother (inspired casting here!). It’ll come down to chemistry, since so much of the comedy lies in the family’s squabbles, but on a role-by-role basis, I think this has an above-average chance of working.

No rumors yet on who will play Paul, Judd’s older ex-jock brother — it’s a critical role for the “brother-bonding” scenes. And I’m not sure about Shankman — he’s never really handled an ensemble cast before, and hasn’t really directed anything that’s done well (pending Rock of Ages). But with great source material, Tropper adapting his own novel, and Bateman as Judd, confidence is good to great on this film. What do you think?