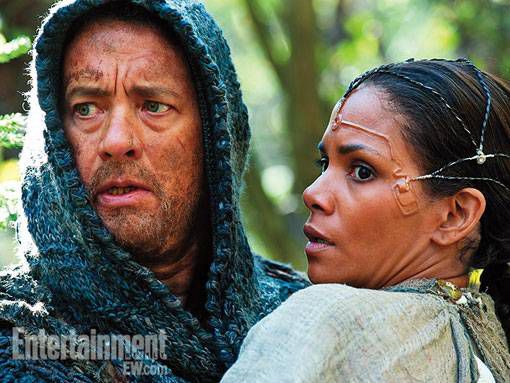 :01- This trailer is five minutes and forty-one seconds long. That’s like a hundred and five in trailer years, but I’ll let the trailer-makers have this one. After all, this is a super f-ing complicated narrative with six story lines spanning centuries, broken apart and nestled into one another matryoshka doll-style. I’m sure it’s much easier to make a ninety-second trailer if the premise is something like”Space people shooting at each other with space guns in space” or “Dinosaurs are really rad in 3D.”

:15- Trailer tries to trick me into thinking this is going to be just another boring period piece about dudes on old-fashioned boats. The book tried to trick me into thinking this too! Nice try, trailer, but I did get through the  just-this-side-of-boring period ship-log shenanigans in the book, and I know that fast food restaurants run by Asian girl clones and apocalyptic Hawaii await me! So I press on!

:41- Halle Berry, I recognize you! You won an Oscar. That’s why you get to still be in movies sometimes! This is a big secret to acting. Other secrets: “Have no stomach fat,” “If you’re pretty, play a character who’s ugly every once in a while because a lot of people think this is the same thing as acting,” and “Make sure if you’re fake crying to have your tears fall down from the corners of your eyes and not from the center because that’s how discerning moviegoers and television watchers know that a production assistant put eye dropper water into your eyes a half second before shooting.”

1:00- Tom Hanks voice over! Tom Hanks is really good at voice over. I know Morgan Freeman’s got the market cornered on Doing The Voice Over For Everything Ever, but I think the boys should take this situation behind the gymnasium after school, if you know what I mean. (Clarification: I mean they should fight, not that they should have unprotected teen sex with each another.)

1:12- This is the part where they put all this exposition into the dialogue about a.) why the title of this movie is Cloud Atlas and b.) every single Sparknotes theme, metaphor, and motif in the entire f—ing book. Now I understand why the trailer is five and a half minutes long. I’m actually a little surprised the trailer isn’t 60 years long.

1:41- Oh snap, now we get Dystopian McDonalds Run By Asian Girl Clones. Have you not read Cloud Atlas? I just sold you on it so hard. Don’t let the boring old-fashioned ship in the beginning trick you. I almost let it trick me! Don’t let it trick you!!

2:00- So we’ve had two minutes of “Piano Recital Piano” and now we FINALLY get “Dangerous Movie Trailer Violins.” Why didn’t we start with the violins? I should run Hollywood.

2:31- Now we get lots of quick shots of a futuristic bridge building itself, post-apocalyptic jousting matches, and a gang of thugs shoving a plunger into the mouth of a old British actor whose name I never remember but who’s good at acting. I TOLD you guys to stick with this past the old-fashioned ship bullsh-t.

2:47- Now we get a Worried Sounding Chorus of Opera Singers. Overkill, trailer makers, the Dangerous Sounding Violins were pah-lenty. I should run Hollywood and The Music Industry, I have so many ideas.

3:05- We just got a lot of cool shots of anti-gravity motorcycles and sad Asian girl clones in Dystopian McDonalds World and now I don’t want to go back to the other worlds.

3:26- M83’s “Outro” starts playing in manner most indie. This trailer is trying to trick me into thinking it’s the trailer for “Where the Wild Things Are.” It won’t work! I haven’t seen ONE funny looking monster with a Jewish grandparent’s name yet!

4:02- There are all these great shots of Tom Hanks and Halle Berry looking at skeleton corpses and old people driving a car through a gate crazily and Halle Berry getting rammed off the road into dark water below. The really cheesy Chicken-Soup-For-The-Soul voice-over they’re forcing Tom Hanks to do only ruins it a little bit.

4:11- The words DEATH LIFE BIRTH in white writing flash on the screen. Indie music is still playing. Is it possible to get food poisoning from a movie trailer?

4:39- I figured out the new algorithm for this trailer. They give us lots of great footage of sci-fi chases and really creepy old-fashioned slave lashings and people almost dying and people actually dying and basically everything that is good about movie-making, and then every once in a while they’ll flash a series of stupid word pairings like “PAST PRESENT FUTURE” or “LOVE HOPE COURAGE.”

This trailer is trying so hard to emotionally manipulate me it’s giving itself a nosebleed.

4:45- We just got an “EVERYTHING IS CONNECTED” title card. Thanks a lot, trailer, now I have to clean all this vomit up off my keyboard!

5:00- Tom Hanks stares at the sky and the words CLOUD ATLAS form. Why doesn’t anything cool ever happen when I stare at the sky?

So a few thoughts to wrap this up:

1.) I need to reread the hiz-eck out of Cloud Atlas before October so I know what the f— is happening in this movie. You do too. For reals, guys, if people who didn’t read The Hunger Games were confused by Peeta throwing bread at Katniss in the rain in the movie version, God help the brave souls who plunk down twelve bucks to watch this without a recent read.

3.) Dear God, please let this movie be released in 3D.

4.) All jokes aside, I am super excited about this movie. My brain peed its pants twice in excitement watching this trailer. And since I watched this trailer five times to write this rundown… that’s lot of pee.