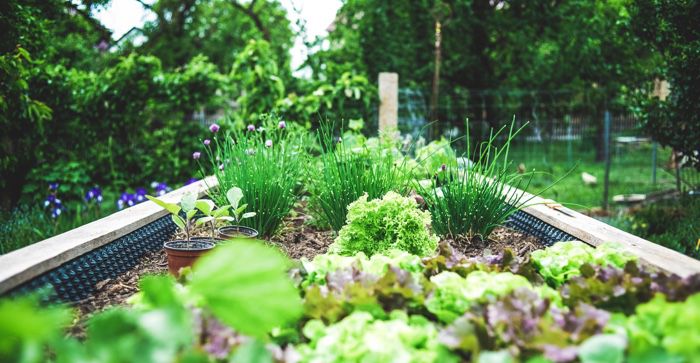 It is both a joke and true that my partner and I bought a garden with a house attached; while we love the house itself, which is a late 1800s row-home complete with transoms and original wood flooring, the garden was straight out of my dreams. When we first saw it, a squash vine had taken over half the back patio, climbing its trellis as well as spilling out onto the nearby table and chairs. There were four raised beds bursting with produce — tomatoes, peppers, herbs — on two terraced levels planted with pollinator-friendly plants and flowers. The care that had gone into it was obvious, and the successes of that care were breathtaking. As soon as we closed and got the keys, I started visiting the house each week (since we wouldn’t move in fully for about a month) to water, to weed, and to gather the bounty that continued to appear. Once we fully moved in, I felt fully the shock of having inherited care of this garden: what if I messed it up? What if I killed everything in it due to my inexperience? Nature laughed at me; we moved in on Indigenous People’s Day in October 2020, and Winter came soon enough to do just that. As everything went into hibernation, I sat down to put some of my own care and thought into what it might look like come Spring. And while it’s true that actual gardening books are having an impact, there are other, less obvious, books that are shaping my garden.

The irony of claiming ownership of a home and garden on Indigenous People’s Day is not lost on me; we are two white people, purchasing our first home, living on the traditional lands of the Lenni-Lenape. We became homeowners in the midst of a global pandemic, one that has and continues to hit marginalized communities the hardest. It’s a great privilege, and with that privilege comes great responsibility. I am working on learning to be a good steward of stolen land, a good neighbor to my fellow human, fauna, and flora communities. In Robin Wall Kimmerer’s Braiding Sweetgrass, she asks what it might look like to “set aside the ways of the colonist and become Indigenous to place.” That gloriously rampant squash vine is one answer; I am one-third of the way towards having a Three Sisters patch. It’s a small way to honor the original Native inhabitants and their deep knowledge of land-care, and I hope it will be a regular reminder for us to give back to the land and to the Native community in other ways as well. Squash volunteers are already poking their heads above the soil, surviving the many squirrel raids, and I’ve got Blue Jade Dwarf Sweet Corn and Scarlet Emperor Runner Beans seeds ready. Now, we wait for enough sun and warmth to plant.

In the meantime, other parts of the garden are already on the move — as are the bees. My obsession with bees was already at a low simmer when I read Nick Harkaway’s Angelmaker, and then it really got big. Truth-telling bees that could destroy or save the universe? Combined with their real-world importance to the survival of, basically, everything? Done and done. I’ve had a bee tattoo for years, and now I have a yard full of pollinators! Salvia, mint, even our laurel hedge has proved a great source of pollen for our local flying friends, judging by the frequency at which I dodge enormous bumblebees while weeding. The next step? A bee bath and a bug hotel are on my Garden Glow-Up, Phase 2 list.

It was originally the fault of Robin McKinley that I have been obsessed with rose bushes since pre-adolescence, although I cannot for the life of me remember if it was Beauty or Rose Daughter that did it. Both or either would work; McKinley is obviously as huge a fan of Beauty and the Beast as I was, but where the Disney movie had me focusing on the Beast’s library, her retellings made me covet a rose arbor outside my front door. I had forgotten all about that childhood dream until I read Alexander Chee’s absolute gorgeous essay “The Rosary” from his collection How To Write an Autobiographical Novel, in which I was astonished to learn that you could grow roses in Brooklyn (!) and that you could do it in a rental yard (!!). Why did I get it in my head that you couldn’t have roses without a cottage? Who knows, but I am thankful to Chee for bursting that nonsense bubble. My first notable Pandemic Purchase? A tiny dwarf Rosa rugosa, that I could take with me wherever I lived. It arrived with black spot fungus, but some frantic emails to the supplier and targeted applications of neem oil cleared that right up. A year later, it’s planted in the actual ground and it is thriving. The fact that the yard came with a rosebush already installed was an unexpected bonus, especially since I didn’t notice until we’d already been living in the house for a month. I still have no idea what color the blooms will be, since it was already dormant when we moved in and hasn’t yet flowered — will it be blush pink, or maybe yellow or orange? Is it a climber or a rambler? What will it smell like? It’s a glorious mystery, one I cannot wait to solve.

I have, of course, already had some failures. The cilantro and swiss chard seeds I planted were either too early or immediately dug up by the aforementioned squirrels. Seedlings I keep mistaking for volunteers from last year’s produce turn out to be stubborn weeds that I then have to dig out. I have no idea how to manage the enormously active raspberry canes a friend gifted me. But the garlic, sage, and strawberries I planted last fall are not just surviving but thriving, and as new books come into my life — most recently The Seed Keeper by Diane Wilson, which I cannot recommend highly enough — I start to think about canning, seed-saving, and feeding family and friends. I don’t know exactly what my garden will look like this year, and I will make mistakes along the way, but isn’t that what all relationships are like? We show up, we listen, we learn, and we keep coming back.